4 Muslims arrested in Delhi for killing a Hindu man for loud music or in an issue to stop molestation.

Hindu Youth killed by Muslim neighbours in Delhi for opposing molestation against his wife in an issue of Loud Music in a festivity. 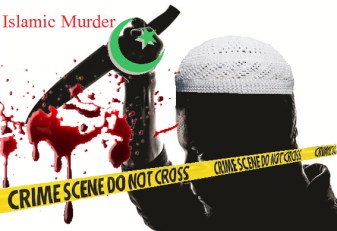 Upendra Bharti | New Delhi | HENB | Oct 28, 2020:: It’s an another part of Jihad in the capital of India to subdue the feelings or the activities of the majority Hindus, if not desirable. The Quran followers took the lethal arms to kill the Kaffirs in a very Islamic way.

Four Muslim men were arrested for allegedly killing a Hindu man and injuring two of his brothers after a quarrel broke out between two neighbouring families for playing loud music at Jhuggi Sarai Pipal Thala of the national capital on Tuesday. There was an issue as reported that the Muslim neighbors hurled filth to the Hindu women and tried to humiliate and molest them which raised the mercury high.

According to Delhi Police, they received a PCR call regarding a quarrel near Adarsh Nagar Metro station Gate No. 4, Jhuggi Sarai Pipal Thala at around 3.15 pm on Tuesday.

When Hindu man Sushil and his two brothers were enjoying DJ Music loudly in this festive season of Dussehra, neighbor Abdul Sattar and his four sons including Chand and Hasin attacked Sushil and his brothers with knives and stabbed them to kill them shouting Allah ho Akbar. It is also told that actually the ruckus started out of slangs and teasing tendered to the women of Sushil’s family including his wife, as reported by Zee News.

“Police reached the spot and came to know that a quarrel took place between two neighbours over playing loud music and the injured people have been brought to Babu Jagjeevan Ram Hospital for treatment. In BJRM Hospital one person namely Sushil (29) was found brought dead,” a statement by police said.

The police said that two brothers of the deceased were also found admitted at BJRM Hospital for treatment.

Police recorded the statement of one injured brother named Anil and then shifted both the injured to Safdarjung hospital for further treatment.

“Four accused have been apprehended and further investigation is in progress,” police said.

The Delhi Police works under the Central Home Ministry where the so called Iron man of BJP Amit Shah is the Union Minster.

The Jihadi situation in and around Delhi including Noida, Gaziabad, Faridabad, Mewat… all seem to be worsened and gradually going out of control.

These Jihadi manifestation in around Indian capital Delhi is connected with adjacent Haryana’s Mewat where Nikita Tomar was shot dead in a broad daylight two days ago by Nuh’s Congress MLA’s cousin Tauseef out of a Love Jihad truce.

The place of Sushil’s murder is not far way where Rahul Rajput was murdered by the same Jihadi elements+ on Oct 7, just a fortnight ago and another Hindu youth Ankit Saxena was brutally killed by Jihadists in a honor killing angle on Feb 2, 2018+.

Don’t forget that Dhruv Raj Tyagi, a 51-year-old Hindu businessman paid with his life for complaining about a group of Muslim youths harassing his daughter in west Delhi’s Moti Nagar area on May 14, 2019+. We are just not repeating the Hindu murders during the Islamic protest against CAA & NRC[1][2][3][4] in the end of February this year.

Thanks to Modi, Shah and Kejriwal to make Delhi as a killing filled of Hindus!

Read also: Youth killed in Delhi for opposing molestation against his wife

2 comments on “4 Muslims arrested in Delhi for killing a Hindu man for loud music or in an issue to stop molestation.”

This entry was posted on October 28, 2020 by hinduexistence in Anti-Hindu, Attack on Hindu Sentiments, Attack upon Hindus by Muslims, Conspiracy against Hindus, Hindu Persecution, Hindus under Attack, Islamic Aggression in Delhi, Islamic Menace, Islamic Murder, Jihad in Delhi, Save Hindus in Delhi, Save Hindus in India and tagged 4 Muslims arrested in Delhi for killing a Hindu man, Hindu man killed by Jihadis for loud music in Delhi, Hindu man killed by Jihadis for saving his wife from Islamic Molestation, Hindu Youth killed by Muslim neighbours, Sushil Murder in Delhi.