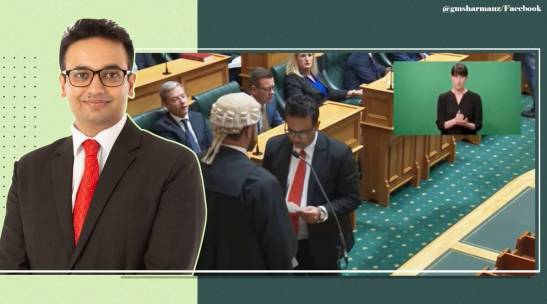 Dr Gaurav Sharma, the MP for Hamilton West, took the oath in local language te reo and then in Sanskrit during the swearing-in ceremony held on Nov 25. It is reported as the 2nd occasion in this year as Suriname President Chan Santokhi took oath in Sanskrit chanting Ved mantra on 16 July, 2020.

Upendra Bharti | New Delhi | Nov 26, 2020:: When members of New Zealand Parliament were sworn in on Wednesday, an Indian-origin doctor stood out after he took the oath in Sanskrit.

Dr Gaurav Sharma, the MP for Hamilton West who originally hails from Himachal Pradesh’s Hamirpur district, first took the oath first in te reo – the indigenous language of the island country – and then in Sanskrit, in a nod to his roots.

The 33-year-old Labour Party MP, who works as a General Practitioner in Nawton and lives in Frankton, shared the footage from the ceremony and it quickly got a lot of attention on social media. “I have tried to learn Te Reo in the past through Unitec and learnt Sanskrit when I was in primary and middle school in India,” he wrote on Facebook.

“Sanskrit is a 3500 year old language from which many of the current Indian languages have originated,” Dr Sharma wrote.

He said he was informed that he is only the second person ever to take the Oath in Sanskrit outside India. The only other person to do so was Surinamese President Chandrikapersad “Chan” Santokhi who took the oath in Sanskrit earlier this year (on 16 July, 2020 ).

Explaining why he choose Sanskrit, Dr Sharma said: Sanskrit made sense as it pays homage to all the Indian languages (including the many I can’t speak).”

Of the 120 MPs who were sworn in to be the 53rd Parliament, 77 took the oath in English and 44 opted for Te Reo, NZ Hearld reported.

Now See how the President of Suriname, Chandrika Prasad Santokhi took the oath in Sanskrit Chanting the Ved Mantras on 16 July, 2020. 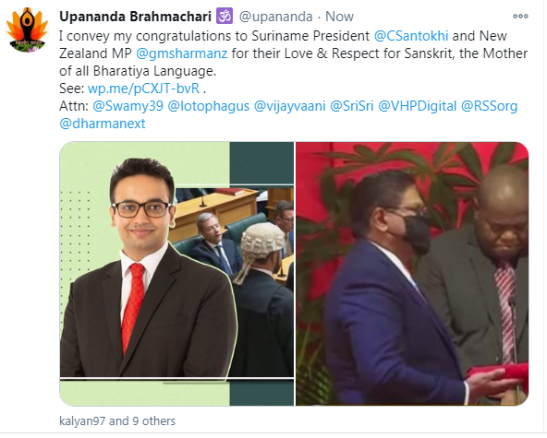 International Hindu interlocutor and Hindu Existence Editor, Upananda Brahmachari thanked both Surinam Prsident Santhokhi and New Zealand MP Dr Sharma through a tweet for their love and reverence to the Sanskrit, the Mother of all Bhartiya Language.