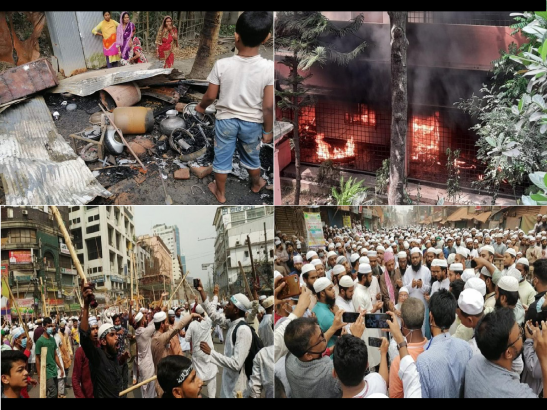 Red Alert for Bangladeshi Hindus for next ten days…. What will do Modi and Hasina? 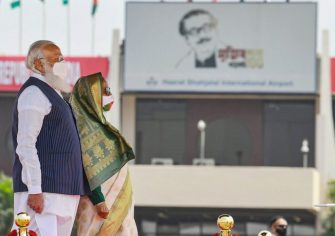 For their Political Interest Modi and Hasina can’t harm the minority Hindus in Bangladesh!

Upamanyu Das | HENB | Dhaka | March 28, 2021:: Reuters’ correspondent Ruma Paul reports from Coxbazar that Hundreds of members of a hardline Islamist group,  Hefazat-e-Islam and their associates attacked Hindu temples and a train in eastern Bangladesh on Sunday, police and a local journalist said, as violence spread across the country in the wake of a visit by Indian Prime Minister Narendra Modi.

Reuters’ report goes further as: Local police and doctors have said at least 11 protesters have been killed since Friday in clashes with police during demonstrations organised by Islamist groups against the Indian leader’s visit. Violence has raged on since Modi’s departure as anger has swelled over the deaths.

Modi arrived in Dhaka on Friday to mark the 50th anniversary of Bangladesh’s nationhood, and he left on Saturday after gifting Prime Minister Sheikh Hasina some 1.2 million COVID-19 vaccine shots.

On Friday, dozens of people were injured in the densely-populated capital Dhaka as police fired tear gas and rubber bullets at protesters.

Thousands of Islamist activists marched down streets across Bangladesh on Sunday.

Activists with the Hefazat-e-Islam group attacked a train in the eastern district of Brahmanbaria, resulting in ten people being injured, a police official said.

“They attacked the train and damaged its engine room and almost all the coaches,” the official told Reuters, declining to be named as he was not authorised to speak to the media.

Several government offices, including the land office and a government-sponsored music academy, were set on fire and several Hindu temples were also attacked, said Javed Rahim, a journalist in Brahmanbaria town.

“We are in extreme fear and feeling really helpless,” Rahim told Reuters by telephone, adding: “Even the press club was attacked, leaving many injured, including the press club president.”

One protester, who sustained an injury during Saturday’s clash in Brahmanbaria, died on Sunday, a doctor said.

Islamist activists also set alight two buses in the western district of Rajshahi on Sunday, while hundreds of protesters clashed with police in several places, pelting them with stones, three police sources in three districts said.

Protesters also vandalised and burned several buses in Dhaka as they blocked many roads, a police official said.

The protests have flared into wider demonstrations against police killings, and the Hefazat-e-Islam enforced a nationwide strike on Sunday.

“Police opened fire on our peaceful supporters,” Hefazat-e-Islam’s organising secretary Azizul Haque told a rally. “We will not let the blood of our brothers go in vain.”

Practically, the Hefazati anger over Modi’s recent visit in Bangladesh did not concentrate after his departure merely in Brahmanberia, many agitations and clashes have already been reported in many Bangladesh media.

While, The daily Star reports, 3 killing in Hefazat-police clashes on Sunday in Brahmanberia+, another major clash reported as 50 injured in Kishoreganj clashes during Hefazat hartal+. In today’s nationwide Hefazat hartal, Highway blockade, torching buses, clashes and processions mark in many places+.

Though, the Bangldesh Govt. issued several strictures to the untamed Hefazat activists, India Govt did not issue even a statement with a concern of minority people in Bangladesh, manily Hindus and Buddhists.

BD Home Minister Asaduzzaman Khan Kamal has warned that no one involved in mayhem across the country will be spared+.

But, the silence from Indian side may harm the human rights and security of Hindu minorities living unsafe in Bangladesh.

Now, PM Modi must be vocal for the minority Hindus under Hefazati threat.

Read also: At Least 10 Killed in Hefazat Violence Against Modi’s Visit to Bangladesh.

One comment on “Huge Hefazati violence in Bangladesh after Modi’s visit, Red Alert for Bangladeshi Hindus.”