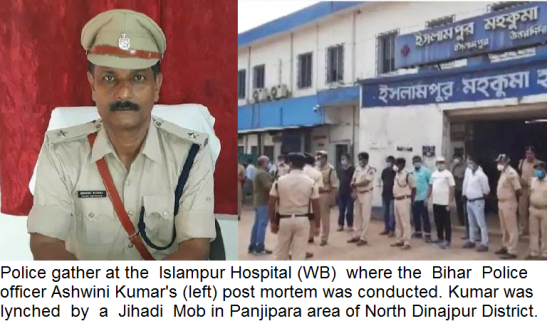 The Hindu officer of Bihar Police was in West Bengal’s Panjipara area when the ‘peaceful’ mob attacked the police team he was leading. The instigating call for attack was made from a local mosque mike.

Suresh Pathak | HENB | Kishanganj | April 10, 2021:: A Hindu Police officer of Bihar state was beaten to death by a Jihadi mob in West Bengal’s Uttar Dinajpur District. The SHO (Station House Officer) of Kishanganj Police Station in Bihar, Ashwini Kumar (50), succumbed to his injuries after being thrashed by the Jihadi locals of a village under Goalpokhar police station area of Uttar Dinajpur.

IG Purnia Range said, “Ashwini Kumar had come for a raid in connection with a bike theft. Islampur SP is with us. We’ll conduct further raids and make arrests of all culprits connected with this gruesome lynching”.

The Bihar Police officer, Ashwini Kumar, had ventured into the neighbouring Panjipara area, in West Bengal, while conducting raids to look for the culprits. He allegedly received no support from the local police in West Bengal.

Three persons have been detained by the police in Panjipara over the killing of the police officer. They are identified as Firoze Alam, Abuzar Alam and Sahinur Khatun, as reported+.

A statement by Bihar Police Association has said while Ashwini Kumar had approached the local police seeking help, they had promised to send a team along with him, but failed to do so.

Later when he reached the village in Uttar Dinajpur, the villagers attacked the Bihar Police officer with sticks and stones. His body was later taken to the Islampur hospital in West Bengal. It is also reported that the local mosque mike was used to provoke the Muslim people to attack the ‘outsiders’ though they were all in police uniform.

Ashwini Kumar who was posted as Bihar’s Kishanganj Station House Officer and was a resident of Purnia district, was known for his strict policing and crackdown on liquor smugglers.

The service revolver of Kumar was also missing, and the police have started searching for it.

All the members  of raiding team with Kumar were suspended+ for their negligence of duties as they fled the scene without saving the life of their officer.

Police officers, who spoke on condition of anonymity, said that liquor smugglers (belonging to Religion of Peace Community) active in West Bengal had been threatening Kumar and may have been involved in his murder.

The body of the police officer was taken to the Kishanganj police station during the day, following a post-mortem in Islampur.

According to the sources, West Bengal DGP P Nirajnayan spoke to Bihar DGP SK Singhal and assured him full cooperation on the related matters.

WB CM Mamata Banerjee cried enough for her four Jihadi brothers died in Mathabhanga (Shitalkuchi) in CISF firing, but she didn’t get any time to condole for the lynched Police Officer Ashwini Kumar by her beloved Jihadi brothers.

Some days before during a election campaign, WB CM Mamata Banerjee provoked  the Muslim people to make gherao on Central Forces in any case of confrontation with them.

Here is an important update from an unverified twitter handle+: Braveheart Bihar Police SHO Ashwini Kumar’s Mom dies of ‘Shock’ after hearing of his Son’s Lynching ; Cremated together. The Officer was Lynched in #WestBengal after announcement from Mosque.

Oh My God! It is true that Bihar Police SHO Ashwini Kumar’s Mom dies of ‘Shock’ after hearing of his Son’s Lynching by Jihadis. TNN also published that news. And the report it is also confirmed that local mosque address system was used to attack to Bihar Police office on raid. The mastermind of the mosque announcement and lynching leader Mohammad Israel and his son Mohammad Abdul are under police custody+. VHP alleged that the perpetrators of lynching are originally Bangladeshi Muslim infiltrators.

In the prayer made for making an FIR, Manish Kumar, Circle Inspector, Kishanganj, Bihar Police to the Out Post In-charge of Panjipara, WB Police clearly narrated the matter of attack on Ashwini Kumar as perpetrated by the Muslim mob through a instigating call from the local mosque mike.