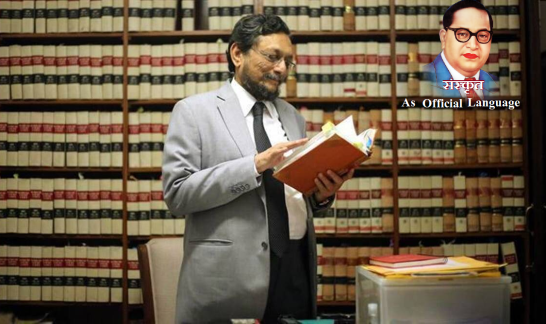 Justice Bobde was speaking at the inaugural ceremony of the academic building of the Maharashtra National Law University at Nagpur.

Vivek Deshpande | IE Online | Nagpur | April 15, 2021:: Chief Justice of India Sharad Bobde on Wednesday claimed that Babasaheb Ambedkar had prepared a proposal to make Sanskrit the official language of India but the move did not make any headway. Justice Bobde was speaking at the inaugural ceremony of the academic building of the Maharashtra National Law University at Nagpur. Ambedkar Jayanti, the birth anniversary of Dr Ambedkar, is also on April 14.

Justice Bobde said, “I was wondering in which language should I speak, Marathi or English. This dilemma is being witnessed in our country for a long time. I have seen this question cropping up frequently as to which language should the courts function in. We have High Courts with the official language as English and Hindi. Some want Tamil, some others want Telugu. I want to humbly submit that nobody is paying attention to this subject. Doctor Ambedkar, however, had anticipated this and had prepared a proposal. I don’t know if that proposal was tabled. It had signatures of some mullahs, pandits and priests and of Dr Ambedkar himself. The proposal was that the official language of Union of India should be Sanskrit.”

“Ambedkar wasn’t an expert in only law but was seized of what was going on socially and politically too. He knew what people wanted, what the poor wanted. That’s why, I think, he had thought of this proposal. But finally English was made the official language. So with your permission, this being the national law university, I will speak in English,” he added.

The CJI congratulated the NLU for introducing a course in ‘nyay shastra’, the ancient Indian jurisprudence in Sanskrit. “The Indian judiciary draws its jurisprudence from the Anglo-Saxon model which is based on Aristotelian and Persian logic. When I read about nyay shastra, I found that it is not a bit inferior to the Aristotelian system. I see no reason that we should forsake, overlook and not benefit from the genius of our ancestors,” said Justice Bobde.

He also pointed out that the Nagpur NLU is also unique in that it has a course for producing judges. Justice Bobde announced the name of his Supreme Court colleague Justice Bhushan Gavai as the Chancellor of Nagpur NLU.

Chief Minister Uddhav Thackeray, who joined the programme online, said, “The Nagpur NLU will go a long way in shaping judges and lawyers just as a sculptor carves out idols of Lord Ganesha. We have to create judges and lawyers who will ably prop the roof over democracy.”

Giving the example of Ambedkar, Thackeray said, “The judges and lawyers who will pass out from here should try to emulate him to ensure that they benefit the poor and the downtrodden by the knowledge they acquire form this institute.”

One comment on ““Dr Ambedkar had proposed Sanskrit as official language.””