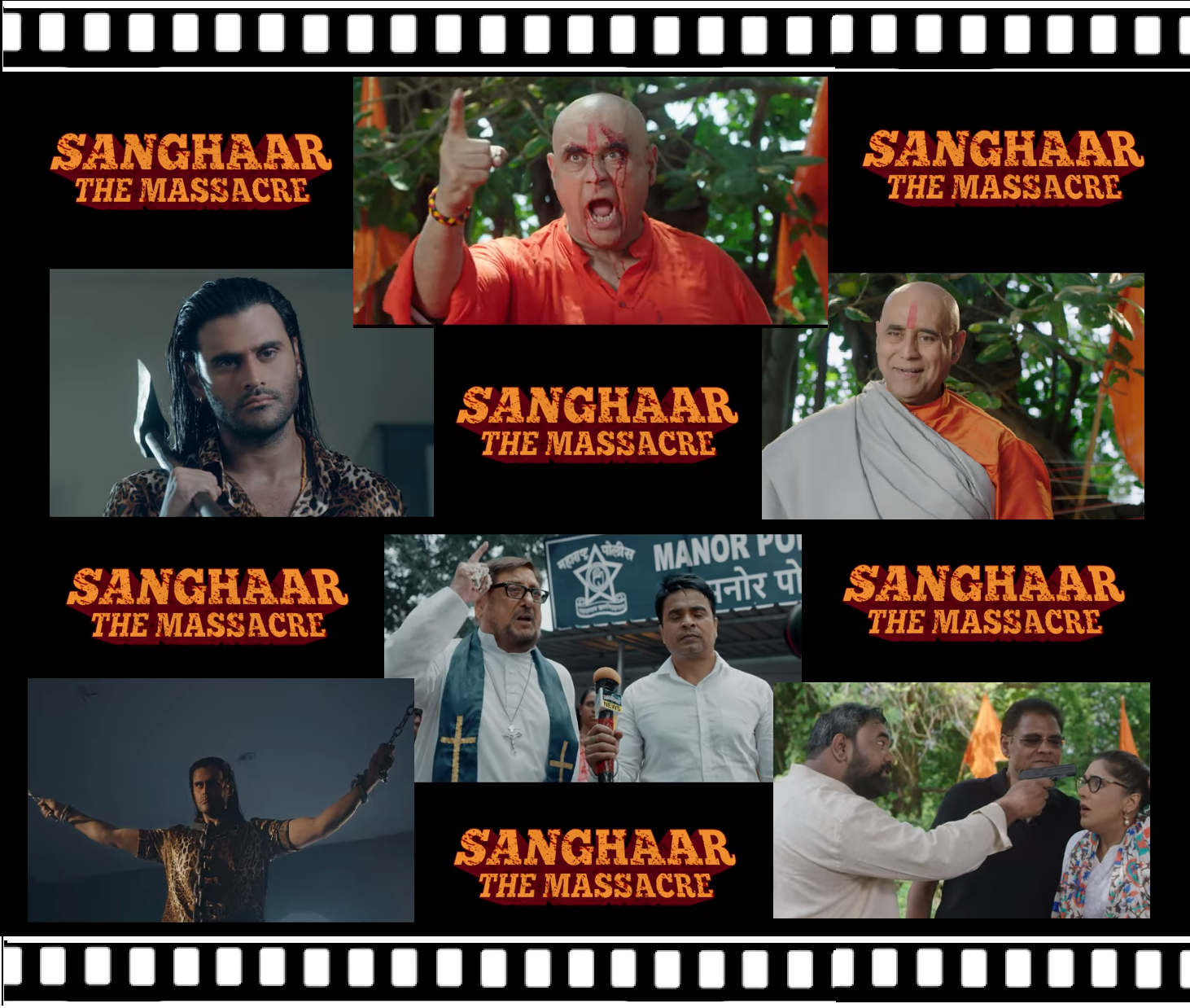 Upendra Bharti | HENB | New Delhi | April 16, 2021:: In just less than 50 minutes a well packed Hindutva narrative on current topics is finally released today in a fictional short film by Showman Theater Productions in their youtube platform. In this  short Film by Puneet Issar and Siddhant Issar, the issues of Go Raksha, Christian Conversion, Urban Naxal Poly against Hindus, the mob lynching of Hindu monks and many more related matters have been cropped up in the just released, Sanghaar: The Massacre.

Here, Siddhant Issar has directed his father in his latest experimental feature in dramatic 50 minutes. Siddhat says – “It was a great experience, directing dad. I have broken his age-old mould of Duryodhan. He will be seen as a peaceful Sage in this film…a never seen before avtaar for him. His character will be seen throwing light on concepts of peace and unity – like “Vasudhaiv Kutumbakam” – The Whole world is one family. And “Sarva Dharma Samabhava” – All Faiths Are Equal!! His acting, look, style and everything else in this film will be new. I have done stage with him as an actor and myself learned so much from him, directing him for the first time, was an honor”.

The unique title song has been sung by the legendary Kailash Kher in an incredible energy. When Siddhant went to Kailash kher with the concept of Sanghaar The Massacre – and told Kailash that the film  would be a tool to condemn the anti-Hindu acts such as violence against all peaceful monks  and saints,  and also to oppose animal cruelty, especially Cow Slaughter – Kher  was deeply moved. He had tears in his eyes and consented to sing the  title song only for a ‘shagun’ (holy token)  of 11 Rupees without taking any high charges.

This song, Dushmano ke Rakt se Dhara ka tu Sringar kar….. Sanghaar kar, Sanghar kar, Adharma ka Sanghar kar (Decor the world with the blood of the enemies…. Destroy, destroy and destroy the anti-righteousness) sung by Kailash Kher may be the war cry for this Hindutva generation for a long time.

Sanghaar: The Massacre has well exposed the urban Naxal tie-up with the Christian missionaries to covert tribal Hindus and run their political ploy of many vested interests including illegal cow slaughter rackets hurting the Hindu sentiments.

Obviously, this short film is unlike the rest attacking the film industries’ trend of pseudo-intellectualism and selective secularism. It’s a flash back watch and an action-packed entertainer. It’s an entertaining movie with dark humor, action, dance and also gives an undercurrent message.

Siddhant told HENB, “It is a massy film for rural India. I’ve targeted masses of UP, Bihar, Jharkhand, Chhattisgarh, MP, Haryana, interiors of Maharashtra and Rajasthan. Everyone who rejoiced when India beats Pakistan in a cricket match was done will enjoy watching this short film. It’s going to be a short film which will entertain you and also give a strong message.”

“Although a short film, the scale and production value are that of a mainstream full length feature film. My father Puneet Issar and other veterans like Satyajit Puri and Gufi Paintal will be seen in the film as well.”

“The short film opposes violence against peaceful sages and also condemns all forms of animal cruelty, especially cow slaughter. We screened the film for several saints and sages across India, they were happy to see it and blessed us, offering their support in many forms. They were happy that Sanghar: The Massacre is a throwback to good old-fashioned values. It sends out a clear message that one must take a stand for what is right, stand up against wrong and raise a voice against injustice against Hindus,” Siddhant continues.