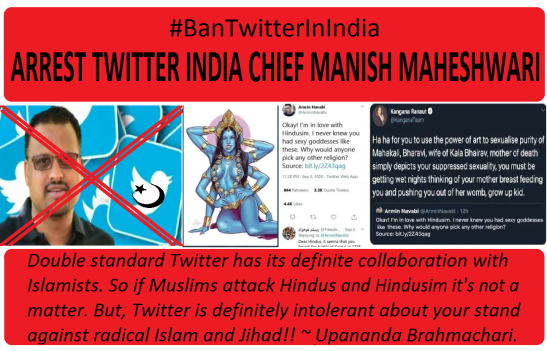 The advocate who filed the complaint said that Twitter through its platform has been deliberately promoting hate speech about the Hindu religion.

The aggrieved advocate cited a picture of Goddess Kali shared by the handle Atheist Republic and of Armin Navabi and said that content posted by the Twitter users was not only abusive but has been posted for the purpose of causing annoyance, inconvenience, danger, obstruction, insult, injury, criminal intimidation, enmity, hatred and ill will in very tolerant society in India.

“It would also be not out of place to mention here that these posts have been put by the said user deliberately, to outrage the religious feelings of Hindus to insult our religious beliefs,” the advocate Aditya Singh Deshwal said.

As a matter of fact, Nationalist Indians and Hindutva activists both are showing their resentment against Twitter India for their double standard as being sided with Muslim Twitter users and putting scourge against many Hindu activists had their Twitter handles earlier.

Reputed Hindu interlocutor and Hindu Existence Web Editor, Upananda Barhmachari opined, “Double standard Twitter has its definite collaboration with Islamists. So if Muslims attack Hindus and Hindusim- it’s not a matter. But, Twitter definitely intolerant about your stand against radical Islam and Jihad!!” 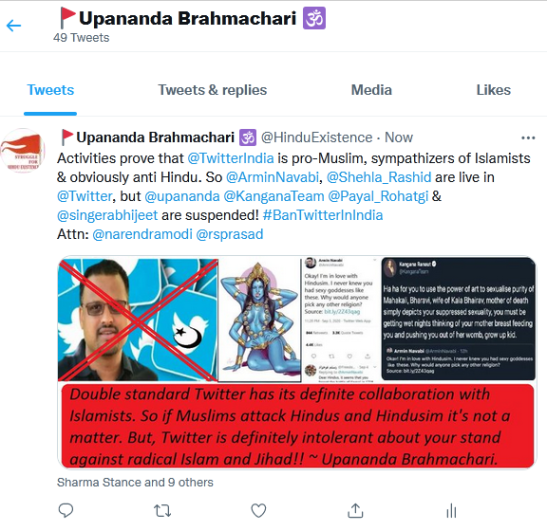