High Court to Supreme Court, all urge to Center for Uniform Civil Code, then why Modi Govt is so reluctant to do so?

Delhi High Court backs Uniform Civil Code, urges Centre to take necessary steps. Supreme Court had also said that a common civil code would help the cause of national integration. Then Why Modi Govt is not taking necessary action for Uniform Civil Code in India?

Suheldev Rana | HENB | New Delhi | July 10, 2021:: Favouring the introduction of Uniform Civil Code (UCC), the Delhi High Court has said the Indian youth need not be forced to struggle with issues arising due to conflicts in various personal laws in relation to marriage and divorce.

The modern Indian society was “gradually becoming homogenous, the traditional barriers of religion, community and caste are slowly dissipating” and thus Uniform Civil Code “ought not to remain a mere hope”, Justice Prathiba M Singh stated in an order dated July 7.

While referring to several decisions of the Supreme court on the need for Uniform Civil Code, including the historical Shah Bano case of 1985, the high court said: “The hope expressed in Article 44 of the Constitution that the State shall secure for its citizens Uniform Civil Code ought not to remain a mere hope.”

In the Shah Bano case, the Supreme Court had said that a common civil code would help the cause of national integration by removing disparate loyalties to laws having conflicting ideologies. It had also observed that the State was charged with the duty of securing Uniform Civil Code for the citizens of the country.

The high court observed that the need for Uniform Civil Code was reiterated from time to time by the Supreme Court, however, “it is unclear as to what steps have been taken in this regard till date”.

It directed that a copy of the order be communicated to the Secretary, Ministry of Law & Justice, Government of India, for necessary action as deemed appropriate.

The court was dealing as to whether the marriage between the parties who belonged to the Meena community was excluded from the ambit of the Hindu Marriage Act, 1955 (HMA).

When the husband sought divorce, the wife contended that Hindu Marriage Act did not apply to them as Meena community was a notified Scheduled Tribe in Rajasthan.

The court rejected the wife’s stand and said that cases like the present one “highlight the need for such a Code – ‘common to all’, which would enable uniform principles being applied in respect of aspects such as marriage, divorce, succession etc.”

Laws should be equal for all citizens irrespective of religion, caste or gender.

The courts of India have been prodding successive governments to bring in a Uniform Civil Code (UCC) as enshrined in Article 44 of Indian Constitution. They raised this issue in 1985, 1995, 2015 and again, while overturning triple talaq as bad in law. The triple talaq issue is definitely not about religion, it was about gender justice.

Many people wonder, what could have stopped Pandit Nehru from pushing the Uniform Civil Code through when he had massive support from within and outside the party in the 1950s?

Why did he stop at the Hindu Code Bill? The simple answer is lack of political courage. This was the reason why UCC became a part of the Constitution’s Directive Principles, stating, “The State shall endeavour to secure for citizens a uniform civil code throughout the territory of India.” It was a grave mistake not to do what was needed to reinforce the idea of an egalitarian democratic society. The golden hour was lost.

In the exercise for the enactment of Uniform Civil Code, the Modi led present Govt of India wanted to assure it through a consensus or opinion seeking from the end of the Indian citizen. 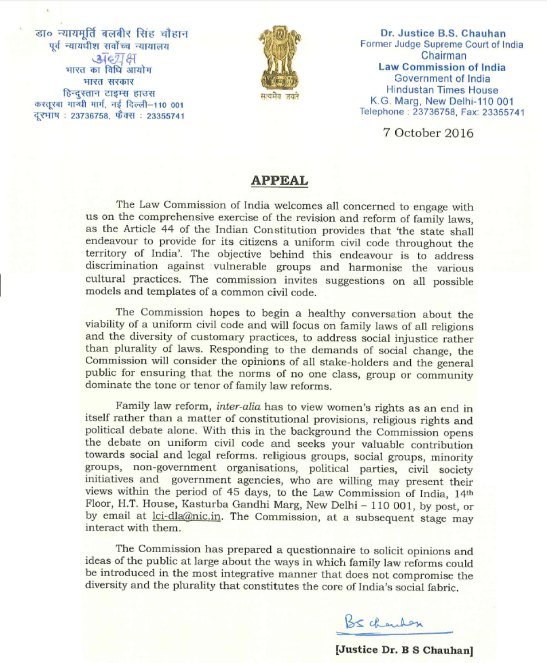 The Law Commission Chairman, Justice B S Chuhan sought public opinion and suggestion for Uniform Civil Code through a letter dated 7.10.2016 through a questionnaire as http://lawcommissionofindia.nic.in/questionnaire.pdf .

Within 21st Nov 2016, thousands of suggestions and submissions from concerned citizens reached to the Office of Law Commission of India at 14th Floor, H.T. House, Kasturba Gandhi Marg, New Delhi- 110001. But, the fate those submissions are still not disposed in favour of Uniform Civil Code in India.

May be minority vote Politics of BJP, put them on the bay of non-confidence for the progression of the Uniform Civil Court in India. But, if BJP takes the same position of Congress to betray a Uniform Civil Code in India, India will be always in threat of Sharia Propagation in India including in the violation of Rights of Equality and Equal law for All.

While BJP stalwarts like Dr Subramanian Swamy, Senior Lawyer Ashwini Upadhya and Meenakshi Lekhi, even ex-Union Law Minister Ravishankar Prasad all have been advocating for a UCC in India, then what’s the problem of PM Modi and HM Amit Shah to do in favour?

So called Secularism in India is selective and lame both. For the true materialization of Secularism, Uniform Civil Code must be enacted in India.

(This write up is a gross compilation from the points of PTI reports, articles of Ratan Sharda and Upananda Brahmachari).

Read also: The threat of Sharia in Bharat (India) and the need of Uniform Civil Code.

One comment on “High Court to Supreme Court, all urge to Center for Uniform Civil Code, then why Modi Govt is so reluctant to do so?”