India will be Islamic Country through Ghazwa-e-Hind (Holy War): ISJKL.

Islamic State has planned to make India as an Islamic Country through Ghazwa-e-Hind. 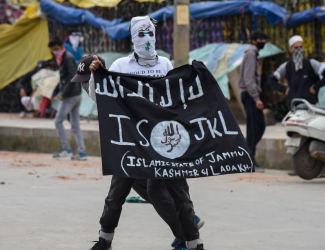 Upendra Bharti | HENB | New Delhi |  July 2021: With the arrest of Jihadi terrorist Umar Nisar Bhat and two of his associates on July 11, Indian intelligence agencies have unearthed a direct footprint of the Jihadi terrorist group, Islamic State of Jammu, Kashmir and Ladakh (ISJKL).

The National Investigation Agency (NIA) had earlier this month confirmed the arrest of another key IS operative Nisar aka Qasim Khorasani, along with his associates Tanveer Ahmad Bhat and Rameez Ahmad Lone for conspiring to radicalize and recruit youths from India into ISIS to wage ‘jihad’. All three are residents of Anantnag district in J&K.

Qasim Khorasani is one of the founding members of the Islamic State in Jammu and Kashmir and intelligence agencies have been on his tail for the past one year. It is known now, ISIS has its deep root in J&K obviously with its wide networking throughout India perhaps.

Indian intel agencies had in April 2020 identified Khorasani on a messaging application. He was found discussing with other members of the terrorist group about the circulation of the ‘Swat Al-Hind’ (Voice of Hind) magazine to propagate ‘Wilayat Al-Hind’ (Islamic State in India).

The magazine also propagated Ghazwa-e-Hind (‘Holy War against India’), according to which terrorists from will march to India from Syria with black flags, wage jihad and convert the country into an Islamic state.

The NIA stated that the Islamic State terrorists were operating from various conflict zones with its cadre in India, and have created a network in which ISIS-related propaganda is disseminated to radicalize and recruit members into its fold by assuming pseudo identities online.

Apart from the three arrests, security agencies also seized a large number of incriminating documents and digital devices such as mobile phones, tablets, laptops and hard disks, and T-shirts having the ISIS logo.

As per source, IS and other Jihadi outfits in India have their secret plans to wage massive attacks on majority Hindus in India and Hindu worship places and congregations to create huge communal unrest in India.

Though removal of Art. 370 from Jammu and Kashmir could not help the rehabilitation of uprooted Hindus in the valley; but the present Army, Paramilitary and Security Agencies operation in the valley helped a lot to neutralize the Islamist outfits as a major success.

One comment on “India will be Islamic Country through Ghazwa-e-Hind (Holy War): ISJKL.”

This entry was posted on July 21, 2021 by hinduexistence in Attack on Hindus in India, Attack upon Hindus by Muslims, Breaking India by Radical Islam, Breaking Indian National System by Muslims, Islamic Aggression in India, Islamic Aggression in Kashmir, Islamic Conpiracy against India, Islamic Conspiracy against Hindus, Islamic Menace, Islamic Terrorism, Jihad in India, Jihad in Jammu and Kashmir, Save India from Supremacist Islamic Conspiracy, Save J&K in India, Say No to Islam, Say No To Jihad, SAY NO TO RADICAL ISLAM and tagged Arrest of Qasim Khorasani, direct footprint of Islamic State in Jammu & Kashmir, Ghazwa-e-Hind (‘Holy War against India’), India will be Islamic Country through Ghazwa-e-Hind: ISJKL, Islamic State of Jammu Kashmir and Ladakh (ISJKL), Make India as an Islamic Country: ISJKL, National Investigation Agency (NIA), Plan to make India as an Islamic Country.