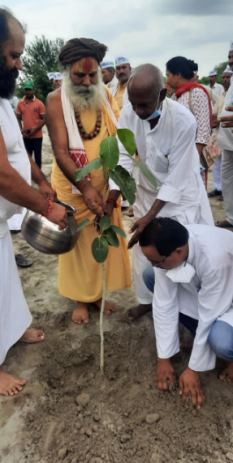 Upendra Bharti | HENB | Etwa | Sept 9, 2021::  The central government should make a national law to a total ban on the cow slaughter in India.  Beside this demand, former RSS and BJP top functionary K N Govindacharya demanded, 50 judges to be appointed for a population of 10 lakh and to give seven percent budget directly to the panchayats for providing accessible justice to the people and the real economic empowerment to the people. KN Govindacharya, the founder of Rashtriya Swabhiman Andolan, said all these things in a press conference on Wednesday at Firozabad in Uttar Pradesh.

Govindacharya specifically demanded that Central government should make law for punishment for killing cow progeny and to protect cow resources as the backbone of agriculture, health, nutrition and environment sectors.

This time Govindacharya  left Yamunotri on August 28 with Yamuna Darshan Yatra, came to Firozabad on Wednesday. During a press conference at the residence of Mukul Shukla, a resident of Himayunpur, he said that he had made a distance from the BJP 20 years ago. The conditions of the BJP central government have reached such a situation when his decision of study leave was taken under a serious compulsion. The environmental empowerment awareness of Yamuna Darshan Yatra will end at Prayagraj on 14th September.

After this, Govindacharya will return to Delhi after visiting Shri Banke Bihari in Vrindavan and visiting the places of Barsana Radha Kshetra and Leela of Lord Shri Krishna. When asked about the BJP government at the Center and the state, he said that the removal of Article 370 was an act of courage, building faith in Ayodhya, taking a decision on triple talaq was also an act of sensitivity. In the same way, efforts will have to be made in the direction of making the continuous, pure streaming of Ganga, Yamuna and Narmada to protect environment. ‘As we put many risks to the environment that turned as major reason for epidemics like corona and dengue virus to us,’ Govindacharya opined.

Govindacharya described Nature and Environment as the only saviour of  Human beings.

On behalf of Rashtriya Swabhiman Andolan, in Maharashtra, Bihar, Chhattisgarh, Rajasthan, the people associated with the organization informed about the efforts to increase the water level in the respective regions. Govindacharya said that in order to preserve the environment, five and seven water bodies that have been lost in each village will have to be revived. The streams of Ganga, Yamuna and Narmada should stream from ‘Aviral Beg’ (continuous flow) and conservation of forests must be  increased, only then we will be able to move forward. Our organization is making efforts in this direction, Govindacharya asserted.

On Thrusday at Jhans in Etwa, Govindacharya also demanded a central law to preserve all the river bodies and making a wider connectivity of Indian rivers to keep environment safe, sustainable and healthy for all.

Many local bodies in Panchayat levels, NGOs, Ashrams, individual entrepreneurs, businessmen  and even many BJP activists are actively participating in the Yamuna Darshan Yatra as envisioned by K N Govindacharya.

Whether anti-Hindu media houses like ‘NDTV’ or ‘The Wire’, they never have to worry about funds. In name of saving democracy, they get money from various sources. We need your support to fight them. Please contribute whatever you can afford. Help us voluntarily to help content making in the exercise of Hindu Rashtra.

One comment on “Union Govt must bring a strict law to ban cow killing: Govindacharya.”