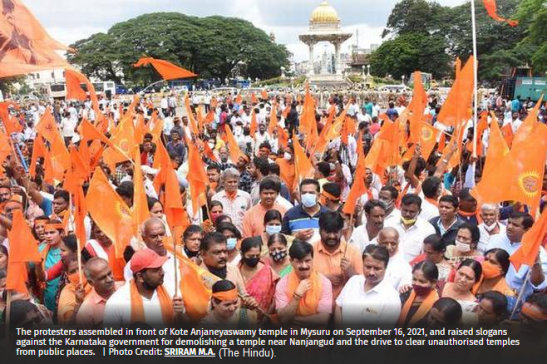 B Upendran | Mysuru | HENB | Sept 16, 2021::  A huge protest against the demolition of a temple near Nanjangud intensified with a large number of activists of VHP, Hindu Jagarana Vedike and other organisations taking to the streets in Mysuru and chanting slogans against the ruling BJP government, on September 16.

The Hindu protesters assembled in front of Kote Anjaneyaswamy temple at the north gate of the palace, and raised slogans against the Karnataka government, embarrassing BJP MLA S.A. Ramdas and supporters of the ruling party who were in the vicinity.

The ‘over enthusiastic’ demolition of Mahadevamma temple at Hucchagani near Nanjangud by Govt agencies has embroiled the BJP in a controversy as leaders across the political spectrum have slammed the Karnataka government.

The issue has divided the BJP as a section of elected representatives, including Mysuru MP Pratap Simha, have criticised the district administration and spoken out against the demolition. On the other end, Mr. Ramdas and others in the party say that court orders have to be implemented even as legal efforts will be made to safeguard temples.

Mysuru district in-charge Minister S.T. Somashekar told media persons that it was natural for VHP and other such groups to be upset over the demolition and described their protest as ‘justified’. He denied that the ongoing stir by Hindu organisations against removal of unauthorised temples from public places is an embarrassment to the BJP. Nearly 100 temples in Mysuru have been identified as unauthorised, but Mr. Somashekar said the demolition drive has been stopped for now. Sections of ruling party and different parts of the Govt both have issued many contrary statements for which the Hindu protests in the region are gradually intensifying.

They showed black flags to the people’s representatives for failing to protect the temples, even after getting elected on the Hindutva ideology. Many BJP supporters were also seen in the protest as local sources confirmed.

The protesters stopped the cars of the two MPs, who were in the city to attend a private programme. The police had a tough time managing the protesters, who urged the MPs to get down from the car. The protesters posed a series of questions to the two leaders.

Mr. Pratap Simha told the protesters that he raised the issue at a meeting in Mysuru and the State government had issued notices to the Deputy Commissioner of Mysuru and Tahsildar of Mandya. “The Chief Minister has already given a clear instruction to stop the demolition of temples. We have confidence in the CM taking appropriate action”, he said.

Mr. Tejasvi Surya, MP of Bengaluru South, maintained that the demolition of temples had hurt the sentiments of devotees. The State government had taken the issue seriously. “Interestingly, now some people have developed devotion to temples. These are the people who celebrated idol-breaker Tipu’s birth anniversary when they were in power”, he commented.

But, such face saving statements by the BJP MPs could not satisfy the Hindu protesters anyway.

__Inputs from The Hindu & Udayavani.