The precious prospect of Priyanka Tibrewal to win Bhawanipur By-election. 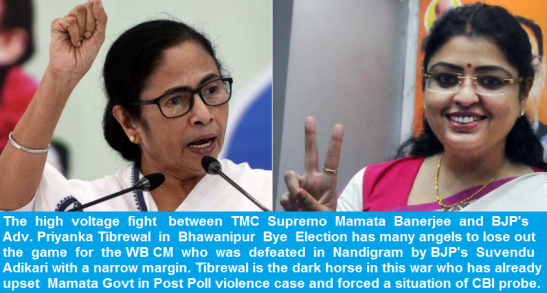 The undercurrent of Hindu-Muslim Polarization in Bhawanipur By-election this time….

Priyanka Tibrewal has many plus points to defeat Mamata Banerjee  if the voters turn out goes higher than 75%.

Sulochana Banerjee | HENB | Kolkata | Sept 17, 2021:: The high voltage fight between TMC Supremo Mamata Banerjee and BJP’s Adv. Priyanka Tibrewal in Bhawanipur (159 Bhabanipur Assemble Constituency) By Election has many angels to lose out the game for the WB CM who was defeated in Nandigram by BJP’s Suvendu Adikari with a narrow margin on May 2, 2021. Tibrewal is the dark horse in this war who has already upset Mamata Govt in Post Poll violence case in Calcutta High Court and forced a situation of CBI probe on this. 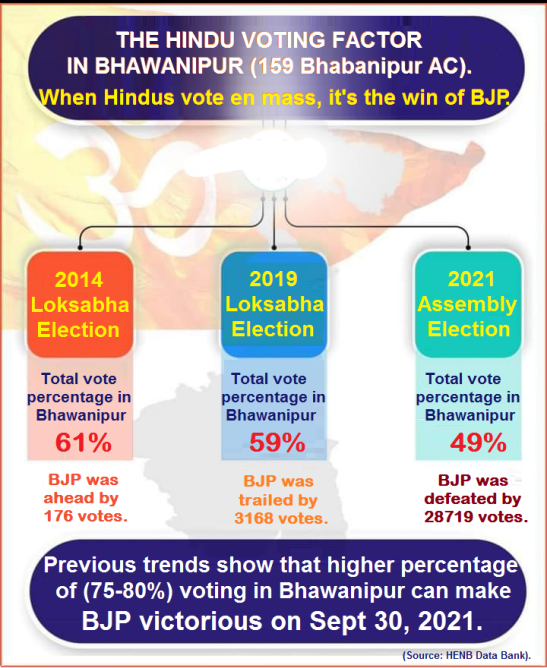 The residents of 30B, Harish Chatterjee Street are frightened this time to analyse the escalation of BJP votes in last consecutive elections which shows a sustainable growth in a higher voters turn out. In the last occasion of assembly election+ BJP’s Rudranil Ghosh was defeated by TMC’s Shobhandev Chattopadhyaya by a margin of 28, 719 when voter turn out was lower than 50%. 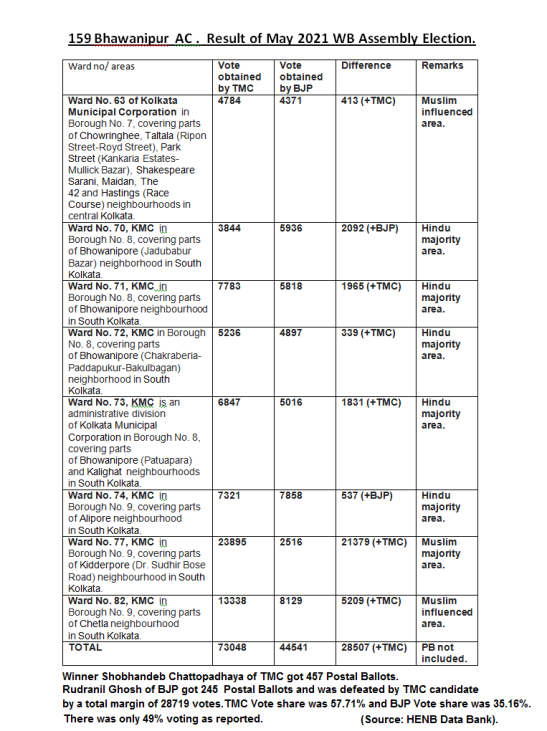 Experts say, in the higher voters turn out ranging 75%-80%, BJP’s Priyanka Tibrewal will get unbelievable dividend to win this election. Hindu voters are expected to side with BJP this time, an internal survey tells.

Another unsupported source tells that a section of Muslims voters may vote for Priyanka Tibrewal as they want to defeat Mamata Banerjee to create and political vacuum in order to make Firhad Hakim as the CM, West Bengal. 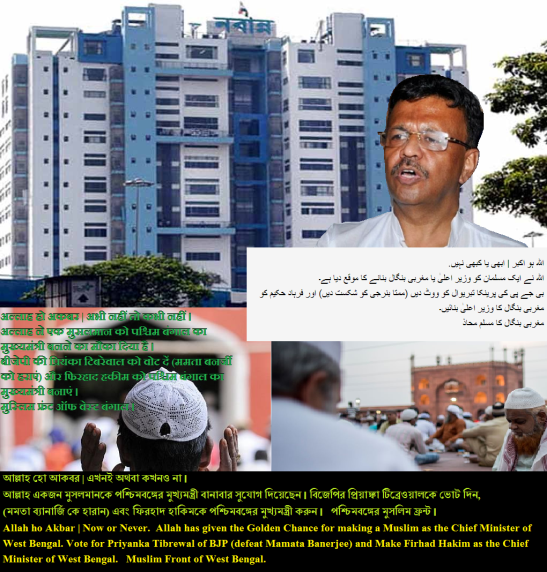 Some social media campaigners are in confusion whether a Muslim Front of West Bengal preaches, “Allah ho Akbar | Now or Never. Allah has given the chance for making a Muslim as the Chief Minister or West Bengal. Vote for Priyanka Tibrewal  of BJP (defeat Mamata Banerjee) and Make Firhad Hakim  as the Chief Minister of West Bengal” or it’s a funny creation of a social media content maker! But, many Muslim Organisations stood for Firhad Hakim when he described his area as ‘Mini-Pakistan’ in an interview with Pakistani News paper.

It is obvious that the Islamic upsurge in Bengal Politics has its definite goal to make a Muslim as the chief Minister of west Bengal. In that pretext, such whispering of voting for BJP by Muslims to defeat Mamata Banerjee with an imagination to make Firhad Hakim  as CM of WB will be an added advantage to Priyanka Tiberwal.

The undercurrent of Hindu-Muslim Polarization has created a new sensation in Bhawanipur By-election this time.

Courtesy: The links and Pics sources used above.

One comment on “The precious prospect of Priyanka Tibrewal to win Bhawanipur By-election.”