Hindu Right Groups Put up Posters at Varanasi Ghats Warning Non-Hindus Not to Visit the Spots for ‘Picnic’.

Upendra Bharti | HENB | Varanasi | January 8, 2022:: Members of two right-wing Hindu groups viz. Vishwa Hindu Parishad (VHP) and Bajrang Dal, have been putting up posters around the ghats of Varanasi that read, “Non-Hindus are prohibited. Only those have faith in Mother Ganga, Ghats in Kashi,  Sanatan Dharma etc. are welcome, otherwise these are not picnic spots.” Leaders of these groups also shared photos of themselves putting up these posters on various social media platforms.

The posters also read, “This is a warning, not a request.”

As Varanasi is the parliamentary constituency of Prime Minister Narendra Modi, he took special initiatives to develop and renovate Varanasi in multiple level and launched Kashi Vishwanath Corridor at grand Varanasi event just 4 weeks ago. Now, VHP and its associates want to maintain the sanctity of Varanasi in another level. 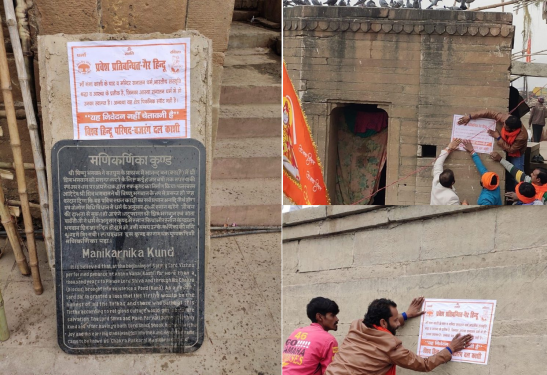 These posters, which photos show were put up by saffron-clad individuals, can be seen at various bathing destinations in Ganga banks across the city – Panchganga Ghat, Ram Ghat, Dashashwamedh Ghat, Assi Ghat, Manikarnika Ghat and others included.

Some of the activists of VHP and Bajrang Dal expressed their concerns, “Many anti-social elements are taking control of the bathing ghats in Kashi creating troubles to the pilgrims. Even anti-social elements from other faiths are trying hard to take control over these ghats and many common people are reluctant to maintain the religious sanctity of these pilgrimages using all these as mere picnic spots. These should not be allowed anyway.”

Though the posters in question have created a controversy among the public, many Hindu organisations have come forward to be vocal to maintain the religious restrictions in the notified Kashi Vishwanath Corridor Project and adjacent areas.

One comment on “Not to Visit Varanasi Ghats as ‘Picnic’ Spots, say VHP- Bajrang Dal Posters. ”

This entry was posted on January 9, 2022 by hinduexistence in Hindu Advocacy, Hindu Demand, Hindu Faith, Hindu Religious Issues and tagged Not to Visit Varanasi Ghats as 'Picnic' Spots.