Decrease of Hindu population in India is alarming….

BJP MP Moves Bill On Population Control; ‘Muslim Population Gone Up To Over 14% From 9%’.

BJP’s Rajya Sabha MP Rakesh Sinha further added that Muslim population has increased immensely in the first census after partition and the population of Hindus has decreased. 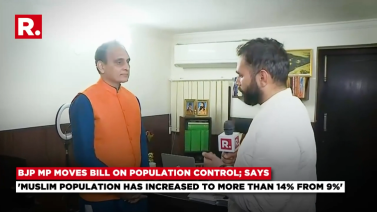 Piyush Mishra | Republic World Online | New Delhi | Feb 4, 2022:: BJP RS MP Rakesh Sinha, on February 4, introduced a Private member’s bill in the Rajya Sabha on Population Control. While speaking on this, Rakesh Sinha said that if the population is not controlled, then social, economic and national problems will rise and there will be massive social stress and strain in the nation.

“For the first time in Parliament, Bill on Population control is being discussed. Till now 40 members have introduced Bill on the question of population control and regulation. My conviction is that if a law is not framed to regulate population of the country there would be unchecked burden on the nation’s recourses and unplanned growth of the population is going to create social, economic and also national problems. Therefore I consider that all political parties should submit on the question of population control and regulation. If the population is not controlled in the country, then the country may enter into many kinds of social stress which would turn out to be a major problem,” said Rakesh Sinha.

“I have not used the word religion even once but the Congress members have suspected the hidden agenda of targetting a particular community. This Bill is for all citizens not for a particular community, this is the fact that muslim population is growing faster than the Hindu population but my Bill is not talking about any caste or religion. Opposition parties are serving the cause of those fundamentalists who are oppsed to the population control Bill and I suspect that they are serving the cause of votebank politics,” Sinha further said.

BJP MP Rakesh Sinha stated that the Muslim population has increased immensely in the first census after partition and the population of Hindus has decreased.