Rajasthan Police arrested Muslim neighbour for the mysterious death of Hindu child in a well.

Ranjit Singh Panwar | HENB | Gandhinagar | Feb 4, 2022:: The body of a 9-year-old Hindu boy missing for two days was found in the well this morning. The police was constantly looking for him. The child was last seen with a neighboring Muslim youth. On suspicion, the neighbor was taken into police custody and interrogated. First kept misleading, later told the dead body to be lying in the well. After the death of the son, the mother was in a very difficult condition. The only son of the widowed mother was the only support of love and future. Local People created a ruckus at the collectorate and demanded that the accused be hanged. Some members of the Hindu Organisations viz AantarRashtriya Hindu Parishad and Rashtriya Bajrang Dal gave a memorandum to the Hindoli Sub-divisional officer and expressed their strong resentment over the suspected murder.

Last time the child was with the neighbor

Kotwali police station officer of Chittorgarh, Tulsiram told that two days ago, a 9-year-old child, Alok alias Duggu, a resident of Chamti Kheda, had gone missing from his house. While searching for the child, a CCTV (installed in a roadside house) footage was seen to get some antecedents of the case. In the footage, the child was seen going on a bike with his neighbor Salman, 35. When the neighbor returned, the child was not with him. On suspicion, he was taken into custody on Wednesday night and interrogated. He told that the body of the child is lying in an open well of Bhisti Kheda. Police went to that spot and found the well.  The body of Alok was pulled out from the well with the help of civil defence. Afterwards, the body was kept in the mortuary of the hospital.

Went to get the pigeon, the child slipped

In the initial statement, Salman said that on February 1, he had gone to the well with Alok to get a pigeon. The child was repeatedly asked to stay away from the well but he did not agree. the child slipped into the well. Out of fear, he (Salman) ran away and returned home. At the same time, Alok’s mother says that the son also knew how to swim. He also used to swim in the river. The police have doubts on Salman’s statements. He will be taken into remand and interrogated.

Alok’s neighbor Salman works as a laborer. On February 1, he was at home. He misled the police for two days. The child’s mother, along with relatives and neighbors also tried to find him. The police had questioned the people around. During this, Salman misled. Told the police that on February 1 at 10 in the morning, Alok was taken for a walk in the cafe. Had dropped back home from the cafe.

Mother used to leave neighbor’s house and go to school

The child’s father Rakesh Meena had died 4 years ago. Mother Priyanka Meena was raising him alone. She works in a school in Gandhinagar. There has been apparently good relationship between Alok and Salman’s family for last 4-5 years. Before going to school, his mother used to leave his son at neighboring Salman’s house. Before his arrival, the child used to play with Salman’s son.

Neighbors of Priyanka tell that Salman may had some plan otherwise to get extra-marital relationship with the widow lady.  Alok, the grown up child of widowed Priyanka would have been putting obstacles for Salman to get in touch freely with his mother in a suppressed ‘love jihad’ tangle. Salman would be planning to eliminate Alok from that row of inconvenience.

Commotion at the collectorate

After the child’s body was found, the condition of the child’s mother Priyanka Meena became very difficult.  Nearby people went to the collectorate and created a ruckus. Crying mother demanded justice. Police force was deployed in many areas under Deputy Superintendent of Police Budhraj, Kotwali station in-charge Tulsiram, Sadar police station in-charge Harendra Sauda. After waiting for hours, the mother reached to meet ADM Ratan Kumar Swami. The people who came with the mother demanded compensation as per government rules, payment of first installment in 3 days and government job for her.  At the same time, the agitated neighbors of deceased Alok demanded justice and hanging of the culprit(s). 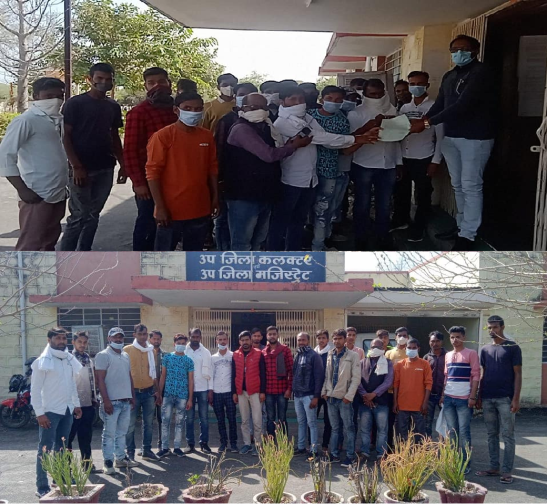 Demand of fast track probe and justice including hanging of culprit

AntarRashtriya Hindu Parishad and Rashtriya Bajrang Dal gave a memorandum to the Hindoli Subdivision Officer and expressed strong resentment over the murder of Alok Meena by suspected jihadi elements in Chamti Kheda village of Chittorgarh district.

In the memorandum, the protestors demanded hanging of the accused of murder of 9-year-old boy Alok Meena. The memorandum addressed to the Governor mentioned that Hindus are being attacked Jihadi mentality people in various states including Kashmir, Kerala, Bengal, Gujarat, Rajasthan for destroying communal harmony of the country. At the same time, they demanded a ban on Islamic radical organizations like  Tablighi Jamaat, Darul Uloom Deoband etc.

The protestors demanded special investigation and fast track judicial action to punish main accused Salman and others, if involved anyway.

One comment on “Rajasthan Police arrested Muslim neighbour for the mysterious death of Hindu child in a well.”