‘Will take stringent steps if saffron insulted’, says Hindutva outfit as it puts up posters near JNU, Pro-active Delhi Police remove those promptly.

Two groups of students clashed at JNU’s Kaveri Hostel on Sunday allegedly over serving non-vegetarian food in the mess on Ram Navami, with police saying six students were injured in the violence.

PTI | New Delhi | April 15, 2022:: The Hindu Sena has put up posters and saffron flags near the main gate of the Jawaharlal Nehru University and surrounding areas almost a week after a clash broke out in a hostel over allegedly serving non-vegetarian food during Ram Navami (Chaitra Navratri).

It also warned of “stringent steps” if there is an “insult to saffron”.

In a video circulated on WhatsApp, Gupta is purportedly heard saying in Hindi, “Saffron is being insulted in the JNU campus on a regular basis. We want to warn those who are doing this. Mend your ways. We won’t tolerate this.”

“We respect your ideology and every religion. But insult to saffron will not be tolerated and we might take stringent steps,” he said. 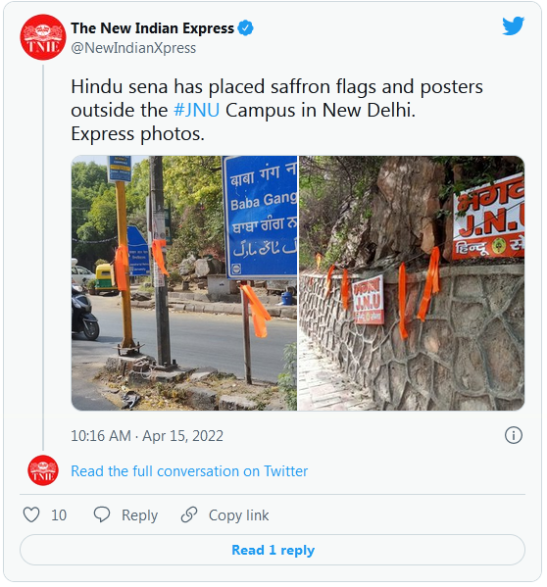 Deputy Commissioner of Police (Southwest) Manoj C said, “On Friday morning, it was noticed that a few flags and banners have been put on the road and adjoining areas of JNU. Those were promptly removed because of the recent incident and suitable legal action is being taken.”

In a statement, the Hindu Sena said the police should not be in a hurry to take down the flags.

“Saffron is not a symbol of terror that the police is showing haste. It is a right under the law to protect saffron and Hindutva,” the outfit said. 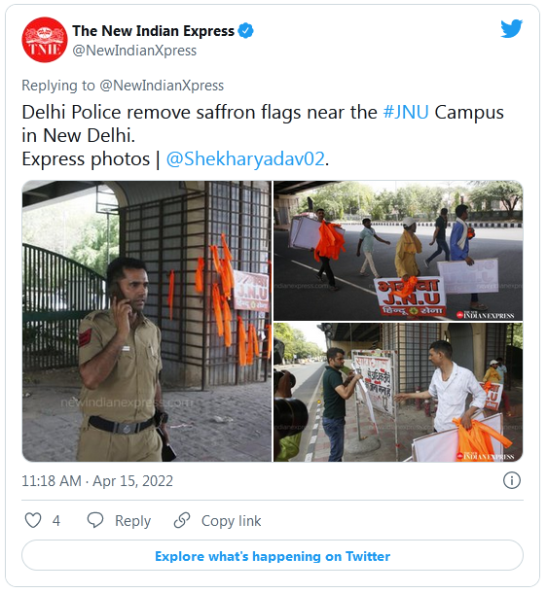 Two groups of students clashed at JNU”s Kaveri Hostel on Sunday allegedly over serving non-vegetarian food in the mess on Ram Navami, with police saying 20 students were injured in the violence.

The two groups, however, claimed that over 60 students from both sides were injured.

The JNU Students’ Union alleged that Akhil Bharatiya Vidyarthi Parishad members stopped students from eating non-vegetarian food (during Chaitra Navaratri, when the non-veg food is prohibited to the majority Hindus)in the hostel mess and “created a violent atmosphere”.

However, the right-wing ABVP denied the charge and claimed that “Leftists” obstructed a puja programme organised at the hostel on Ram Navami.