Congress and BJP blame each other for the demolition of 300 yr old Hindu Temple in Alwar.

A 300-year-old Shiva temple in the Alwar district of Rajasthan was demolished, triggering protests in the area. 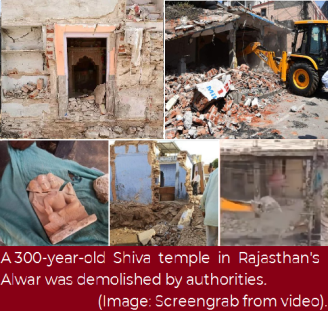 Santosh Sharma | India Today Online | Alwar | April 22, 2022:: A 300-year-old Shiva temple was demolished in Sarai Mohalla in the Alwar district of Rajasthan. A complaint was filed against the Executive officer (EO) of the nagar panchayat, Sub Divisional Magistrate (SDM) and the Rajgarh MLA of the municipality to register a case in the police station.

Sharing a video of the incident on Twitter, BJP leader Amit Malviya launched a scathing attack on the Congress. He said, “Shedding tears on Karauli and Jahangirpuri and hurting the faith of Hindus — this is the secularism of Congress.”

In another tweet, Amit Malviya alleged, “On 18 April, without issuing any notice, the administration ran bulldozers over the pucca houses and shops of 85 Hindus in Rajgarh town of Rajasthan.

Rajasthan minister Pratap Singh Khachariyawas called the BJP’s claim a lie. He alleged that the chairman of Rajgarh Urban Bodies Board, who is a BJP member, proposed to bring down the temples and houses.

Khachariyawas alleged that at the chairman’s behest, the temple was demolished, while a Congress MLA, kept on opposing [the decision of demolition].

Khachariyawas also promised that the temple will be rebuilt if there are no legal impediments.

On April 6, the municipality had issued notices to 86 people over the removal of encroachments.

When the locals approached (local) Rajgarh MLA Johri Lal Meena (of Congress), he said the people formed a BJP board and therefore the demolition was happening.

Eventually, the authorities allegedly demolished three temples in Alwar’s Rajgarh, despite locals protesting against it. The idols of Lord Shiva, Lord Hanuman and other deities installed at these temples were ruined.

During the proceedings, officials went near the idols while wearing shoes and used a cutter-machine to remove the idols.

The members of the organisations reached the police station in Rajgarh to protest and demand that an FIR be registered in connection with the incident.

In view of the growing controversy, Superintendent of Police Tejaswini Gautam said he will meet locals on Friday. He said that the whole matter would be discussed with other police officers.

The demolition of the 300-year-old Shiva temple came to light days after communal violence was reported in Delhi’s Jahangirpuri and Rajasthan’s Karauli.

2 comments on “Congress and BJP blame each other for the demolition of 300 yr old Hindu Temple in Alwar.”

This entry was posted on April 23, 2022 by hinduexistence in Anti-Hindu, Attack upon Hindu Sentiment, Attack upon Hindu Temple, Attack upon Hindus by Secular, Conspiracy against Hindus and tagged 300-year-old Shiva temple in Rajasthan's Alwar demolished, BJP (Bharatiya Janata Party), CONGRESS, Congress and BJP blame each other.