Over 10 Muslim ‘Nomads’ including women, children convert into Hindu religion in Ratlam.

Ratlam: Over 10 ‘Nomads’ including women, children convert into Hindu religion.

According to the organisers of the event, these people were attending the event to listen to ‘Puran’ (religious preaching of Hindu religion) for the past few days. Following which the mindset of these people changed and they decided about adopting Hinduism.

After the desire of the nomads, the organising committee and Anandagiri Maharaj helped them to adopt Hinduism. The nomads shaved their heads, took holy baths, wore Janeu, took resolutions and accepted the Hindu religion.

According to reports, these nomads used to sell medicinal herbs and used to beg in the village and the surrounding areas. They were living in the village for about 75 years but did not get any recognition. During the event they expressed their desire to become a Hindu. After the rituals performed to convert them in hindu they were also given names according to the Hindu religion. Before becoming Hindu, these people also prepared their affidavits.

One of the converted persons, Mausam, now Karan Singh, said that they belonged to the Hindu religion. They somehow deviated from their religion and now they converted into Hindu according to their wish and would remain Hindu. 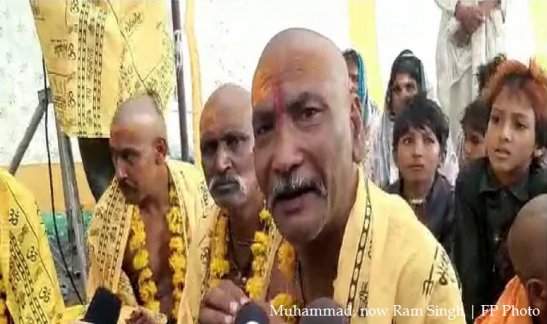 Another converted person, Muhammad, now Ram Singh said that his ancestor were Hindu and he somehow associated with Muslims. Since he was born in Hindu , he returned to Hindu religion. “We neither went to masjid (mosque) nor recited namaz (religious prayer of Muslims). We only went to dargah for some time. We used to beg for food. Now, we returned back to our religion. None has forced us to do so,” said Ram.

On the other hand, a woman named Asha, said that she was Hindu herself and her ancestors belonged to the Hindu religion only. “We have been worshipping Hindu Gods and Goddesses for years. We don’t know about Muslims rituals. We only used to beg for food like Muslims. But we are Hindu,” said Asha. After the conversion her name remained the same.

2 comments on “Over 10 Muslim ‘Nomads’ including women, children convert into Hindu religion in Ratlam.”