Dutch MP Geert Wilders, who had come out in support of Nupur Sharma, has now spoken out against the murder of the tailor in Udaipur, Rajasthan.

Sompriya Saxena | HENB | New Delhi | July 1, 2022:: The horrific murder of a Hindu tailor named Kanhaiya Lal Sahu by two Muslim men in Udaipur, Rajasthan shook the country to the core, also sparking a religious and political debate. Now, the killing of the tailor has also sparked a reaction from the international community.

Geert Wilders, who is an MP from the Netherlands, had earlier caught the limelight in India when he came out in support of former BJP leader Nupur Sharma, who was suspended from the party after she made certain objectionable remarks on Prophet Muhammad.

Now, the Dutch MP has come forward to speak out against the killing of Sahu in a brutal and horrific way inside his own shop in Udaipur. Wilder said that India needs to “stop being tolerant to intolerance,” and to defend Hinduism against extremism.

Taking to his Twitter handle, the Netherlands MP said, “Please India as a friend I tell you: stop being tolerant to the intolerant. Defend Hinduism against the extremists, terrorists, and jihadists. Don’t appease Islam, for it will cost you dearly. Hindus deserve leaders that protect them for the full 100%.” 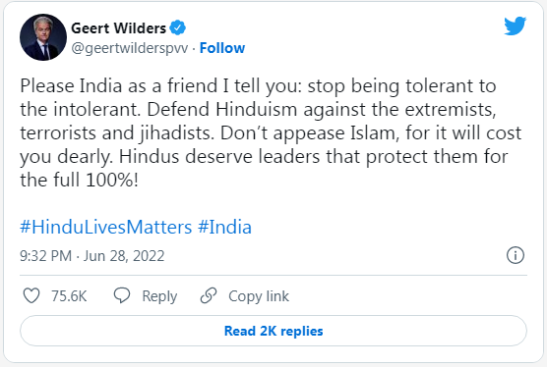 Wilders, who is a far-right leader from the Netherlands, also tweeted, “Hindus should be safe in India. It is their country, their homeland, it’s theirs! India is no Islamic nation.” The Dutch MP had earlier spoken out in support of Nupur Sharma, saying that she had only “spoken the truth”.

On Tuesday (28/06/2022) evening, a man named Kanhaiya Lal Sahu was hacked to death by two Muslim men inside his tailoring shop, which was located in a busy Udaipur market in Rajasthan. The entire ordeal was filmed by the assailants and the video of the killing was uploaded online.

Following the killing of Sahu, massive protests erupted in Rajasthan against the government and the police. Kanhaiya Lal was reportedly killed by the Muslim men for uploading a Facebook post that supported former BJP spokesperson Nupur Sharma.