Strong Hindu retaliation in Dewas (MP) for alleged kidnapping a Dalit girl by a Muslim youth. 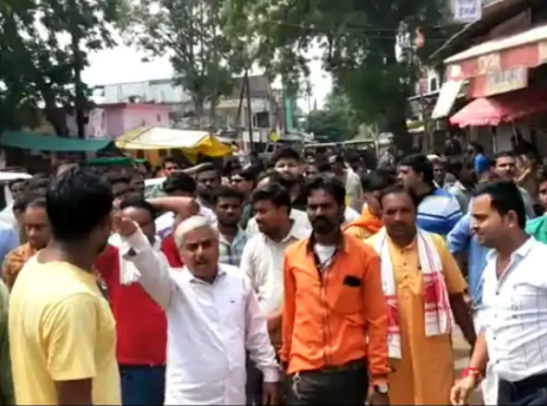 Huge protest over the alleged kidnapping of a Dalit Hindu girl by a Muslim youth: Ruckus in Udaynagar of Dewas (Madhya Pradesh), the irritated Hindu mob vandalized the vehicles, and a religious place.

Shalini Chouhan | HENB | Bhopal | Aug 29, 2022:: In Udayanagar of Dewas district of Madhya Pradesh, there was a ruckus when a Dalit girl of Hindu faith went with a Muslim youth. The family of the girl and neighbors created a ruckus alleging kidnapping. A bandh was  called in the city and shops were kept closed demanding the immediate arrest of the youth. Hindu public also demonstrated  with a demand of action to arrest the accused by gheraoing the police station. A procession was also taken out in the area. Stones were thrown at the house of the accused and his two relatives. The mob also vandalized a Mosque and damaged the mikes. Two bikes and a car belonging to the family of the accused were also damaged. Police arrived at the spot immediately to  handle the situation.

A case of abduction

The girl’s brother, while filing a police report, said, “We are four brothers and sisters. A sister and brother went to school. Father had gone to Indore. Me and the kidnapped sister were fertilizing our field at 2 pm on Friday. Meanwhile, Farzan (20) son of  Sajjuddin came and called my sister (19) by name and dragged her out of the field. After this, he took the sister on a bike and took her away”.

This case has been portrayed by the Hindu side as a part of a Love jihad entanglement.

A bandh was kept in Udayanagar since morning demanding to nab the accused. The police assured to nab the accused within 24 hours, after which the situation returned to normal. Bagli SDM S. Solanki also reached the spot and handled the situation. A flag march was taken out in the city. SDM Solanki spoke to the victim’s family. The mob broke the vehicles of the relatives of the accused youth.

Though the situation in Udainagar is currently under control, police force has been deployed in the city as a precaution. It is being said that the case happened on Friday. The police have registered a case against the accused youth Farzan. According to the sources, two Hindu people named Shera Yadav and Shubham alwong with 20-25 unknown persons were also accused in the vandalism case as well. However, the police denied passing any remark openly on the issue.

2 comments on “Strong Hindu retaliation in Dewas (MP) for alleged kidnapping a Dalit girl by a Muslim youth.”