Gyanvapi case: As PFI enters, Govt must provide security cover to the Hindu lawyers in this case. 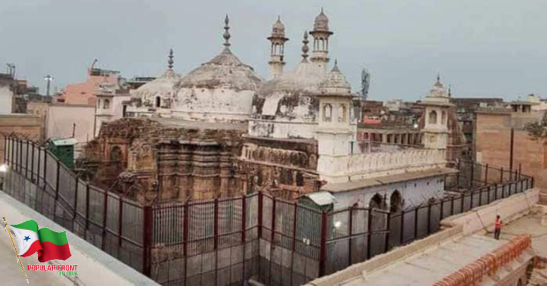 As the dangerous PFI enters into the Gyanvapi case with their Jihadi doctrine, Govt must provide security cover to the Hindu side Advocates in the matter including Senior Adv Hari Shankar jain, Adv Vishnu Shankar Jain and others who don’t have security cover.

Upananda Brahmachari | HENB | Haridwar | Sept 14, 2022:: The Islamist outfit Popular Front of India (PFI) which is also a Jihadi cadre based organisation, has finally entered into the Gyanvapi-Shringar Gouri case.

Through a press release in PFI website, the organisation declared, “Popular Front extends its support to the struggles of the Masjid committee to protect the centuries-old Mosque against aggression and stands with its decision to challenge the order in the high court.”

Taking the name of Popular Front of India (PFI) in a secular camouflage, the organisation has been carrying out Jihadi activities since its inception including the assault (chopping the hands) on Prof. T. J. Joseph who published a controversial question paper, supposedly insulting the Islamic prophet Muhammad in 2010.

In 2012, the Government of Kerala claimed that PFI is “nothing but a resurrection of the banned outfit Students Islamic Movement of India [SIMI, affiliate of the Indian Mujahideen] in another form”. The PFI’s founder national chairman, Abdul Rehman, was the former national secretary of SIMI, while the organization’s Kerala state secretary, Abdul Hameed, was SIMI’s former state secretary. Retired Indian army officer P. C. Katoch has claimed that the PFI maintains links with the Pakistani intelligence agency, ISI.

In recent, Bihar police discovered a document of PFI revealing its plan to Islamize India into a Islamic State.

When such an extremist Islamic organistaion has declared its participation in the Gyanvapi case, the safety -security of the advocates of Hindu side in the matter is highly involved. As a habitual offender, the PFI can execute its Jihadi programmes against its opponents anytime in any manner. 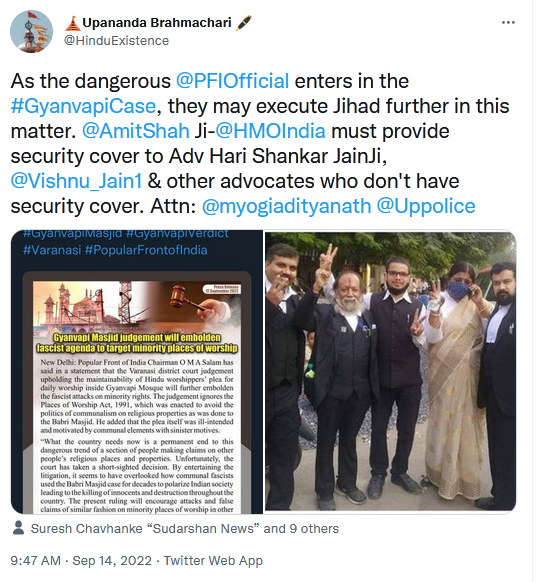 In this situation the Govt in the Centre and State must provide security cover to the Hindu side Advocates in the matter including Senior Adv Hari Shankar jain, Adv Vishnu Shankar Jain and others who don’t have security cover.

Govt in States and Central level must analyze the situation as developed on PFI connection in Gyanvapi matter with higher importance to keep kin vigil.

In the meanwhile, the Hindu petitioners in the Gyanvapi case have filed a caveat in the Allahabad High Court today so that, if the mosque committee filed a petition against the order of the Varanasi court, the High Court would not pass any order without hearing the Hindu side.

2 comments on “Gyanvapi case: As PFI enters, Govt must provide security cover to the Hindu lawyers in this case.”