The Hindutva organisation had announced the event to recite the Hindu prayer- ‘Hanuman Chalisha’ at the mosque to mark the 30th anniversary of the demolition of the Babri Masjid. Sources said that the police were looking for some other Hindutva leaders, who might have gone underground to avert their arrest. 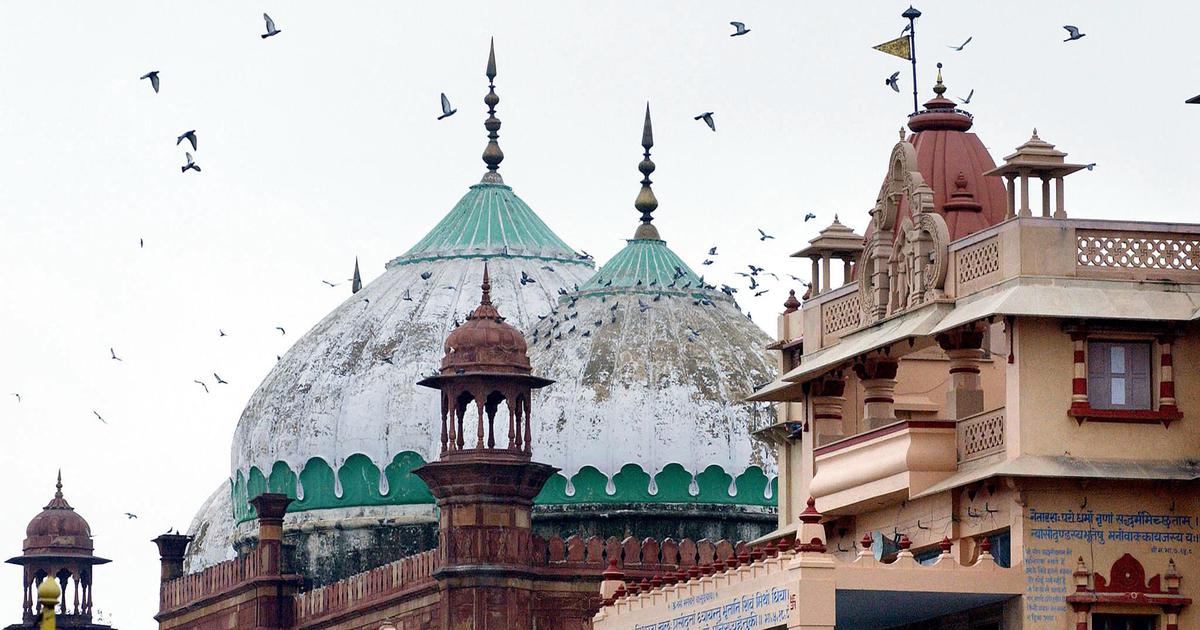 Jayprakash Singh | HENB | mathura | Dec 6, 2022:: A Hindutva leader was on Tuesday arrested after he tried to proceed to the Shahi Idgah Masjid, which was adjacent to the Shri Krishna Janmabhoomi complex in Mathura, to offer jalabhishek (offering of sacred Ganga waters).

According to the police sources here, four other leaders of the All India Hindu Mahasabha were detained after they declared that they would recite Hanuman Chalisa and install an idol of Lord Krsihna inside the Mosque complex. Sources said that the police were looking for some other saffron leaders, who might have gone underground to avert their arrest.

Police officials said in Mathura that Agra district president of the Mahasabha Sourav Sharma was arrested from Bhooteshwar locality in the town on Tuesday morning when he was on way to the Mosque carrying Ganga waters for offering.

Sources said that several office bearers of the Mahasabha were detained while some were kept under house arrest to thwart their attempt to reach the disputed site.

Police had banned entry of vehicles on the roads leading to the Shrikrishna Janmabhoomi-Shahi Idgah Masjid complex, sources said. “Only vehicles carrying essential items are being allowed,” a senior police official said in Mathura.

A total of nine petitions were pending in the Mathura district courts with regard to the ownership claims of the Shri Krishna Janmabhoomi-Shahi Idgah Mosque Complex. All the petitions were filed by the Hindu parties.

The petitions have sought removal of the Shahi Idgah mosque, which was adjacent to the existing Shri Krishna Janmabhoomi, from the complex and claimed ownership over the entire 13.37 acres of land on which they were situated. They have also challenged the agreement between the Shahi Idgah Mosque Committee and the Shri Krishna Janmabhoomi Trust allowing the Mosque to continue to exist and use the land on which it was situated.

But, it is a fact that the Barbaric Mughal ruler Aurangzeb destroyed the Mathura Keshavdeva Temple in 1670 to erect Islamic structure there.

Italian traveller Niccolao Manucci who worked in Mughal court has also described the temple of Lord Krishna in his record. Mughal prince Dara Shikoh had patronised the temple and donated a railing to the Krishna Janmasthan temple.The railing was removed by Mathura governor Abdun Nabi Khan on the order of Mughal emperor Aurangzeb and he built the Jama mosque on the ruins of the Hindu temples as destroyed partly. During the Jat rebellion in Mathura, Abdul Nabi Khan was killed in 1669. Then Aurangzeb attacked Mathura and destroyed that Keshavdeva temple in 1670 and built the Shahi Eidgah in its place.

The Vishwa Hindu Parishad (VHP), which had spearheaded the Ram Temple movement, had made it clear that the Shri Krishna Janmabhoomi issue would be taken up in 2024, the year the next general elections were scheduled to be held in the country.