Age old Durga Mata Temple in Sindh, Pakistan will be destroyed by Muslim granite-miners within one month.

A great inspiration for reluctant Indian Hindus. Minority Hindus in Pakistan are giving a great fight to stop temple demolition. Most respectful Salutaion from Hindu Existence.

The demolition of Hindu temples in Pakistan for the construction of parks, schools etc is a common phenomenon in Pakistan.

In the latest such incident, some contractors have started digging granite stones at the base of a hill, on top of which a historical Temple of Durga Mata is located, in Sindh district. Despite opposition by local Hindus, the digging work is going ahead and the temple may be completely demolished within a month.

The company began excavating a hill near the Durga Mata temple in Choryo village of Tharparkar district with heavy machinery and dynamite about a month ago. 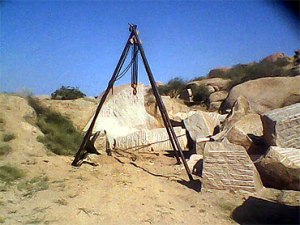 Local residents said contractor Abdullah Qureshi was given control of the hill on lease by the Sindh government.

Qureshi is “busy blasting through huge chunks of the hill at the bottom of the temple to extract granite while the pilgrims watch on in horror,” the report said.

The excavation was launched as pilgrims from Nepal, India and other countries came to the temple to attend the annual ‘Sardaro mela’ in February, The Express Tribune newspaper reported.

The ‘yatris’ or pilgrims found that the path leading to the temple was destroyed.

“Pieces of rock were scattered all around and heavy machinery loomed ominously and silently nearby,” the report said.

The three-day Shivratri mela that began on February 2 became an occasion for protests by local residents.

The ancient temple is located on top of a hill in Nagarparkar in Tharparkar district of Sindh. A number of Hindu and Jain temples are located in Nagarparkar and its surrounding areas. Most of them date back to 2,000 to 2,500 years.

Instead of trying to put a stop to the digging activity, the Sindh government has issued a lease to a contractor to carry out the work.

Veerjhi Kohli, caretaker of the temple, told “The way the work of blasting is going on, the temple will be demolished within a month. The hill (on which the temple is located) is going to be dug up from all sides, how will the temple survive? The demolition of the temple shows how helpless Hindus living in Pakistan are.”

Veerjhi added, “Some two lakh pilgrims visited the Durga Mata temple during Shivratri. The pilgrims had protested the destruction and urged the government to stop the work, but to no avail. The work was halted during the festival but now it has resumed again.”

The Pakistani media also doesn’t highlight the destruction of temples, laments Veerjhi, adding that it doesn’t focus on the plight of Hindus in the country.
“Neither any TV channel nor any leading newspaper reported our protests. After such incidents, we Hindus feel alienated in Pakistan,”

Hindu activists have approached local political figures and other concerned authorities but none of them have offered to help. “We were shocked by the district coordination officer’s remark, who said the temple was safe and there was no risk to it from the digging,” Veerjhi said.

15 comments on “Age old Durga Mata Temple in Sindh, Pakistan will be destroyed by Muslim granite-miners within one month.”