CHALLENGERS AGAINST INDIAN DEMOCRACY MUST BE PROSECUTED. STOP “SHARIAH 4 HIND” AT ONCE. 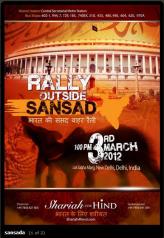 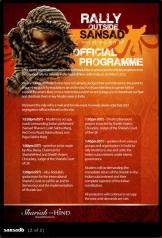 Stop ‘Shariah for Hind’ Project at any cost. Arrest them who are against Indian Democracy.

India is a peace loving country and believes in its democratic stature and obviously the abode of the largest democratic system not for its administrative and political mechanism, but for its inbuilt democratic psychological structure of the majority people as upheld here. In one word, the majority Hindu people here hermitically protects the democratic texture of India with caring all the interest and growth of the minority Muslim and Christian people in India. And the Majority Hindu people here obviously promoted the growth and development of the Indian minorities  than both of Muslim and minority people in the neighboring countries in all respect, since its political independence in 1947.

Though this holy land of Aryavarta, Bharat, Hind, Hindustan or India was divided as India and Pakistan on the basis of two nation theory as Hindustan for Hindus and the Pakistan for Muslims at the time of partition of our Mother Land, Hindus choose a democratic and secular state in reality, while Pakistan opted a basically Islamic country there. But, for its genetic generosity India is  now under the looming threat of Islamization in the name of full implementation of Sahriah under a project “SHARIAH FOR HIND”. 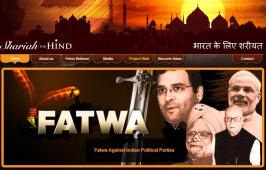 Actually, Shariah is the greatest threat to the Muslims in India equally than the Hindus as all the 72 sects  or 73 sects in Islam are protected in this soil in India, which is never seen in any Islamic country under shariah denomination. But, some fanatic propagators are trying hard to talibanize India and the Indian sub-continent through a crude propagation of Sahriah, curbing all civil rights of others.

The threat of Shariah upon Holy Indian Constitution is not a new one. The threats have been coming from outside for a long time since an alive Hakimullah Mehsud declares an Islamic invasion in India to make it a land of Allah or a Molla Omar declares a war (Jihad) against India to establish here a Dar-ul-Islam to liberate this land from the clutch of kaffirs. In recent, one faction of Islamists in Bangladesh, named Hizbut Tharir declared that they will bring back India again under Islamic rule. For its materialization the said Islamist Group tried a coup (19th January 2012) in Bangladesh as to utilize the military force of Bangladesh to capture India in their fantasy.  The another  fanatic Muhammad Sayeed of Jamaat-ud-Dawa declared a war against India to capture India for a Shriah State declaring Kashmir as a free Islamic bastion in  a Islamic congregation of 40 political and religious parties at Lahore on 18th December, 2011 in the ground of Minar-e-Pakistan under an umbrella organization Difa-e-Pakistan, i.e. Defence of Pakistan. But, the Indian statesmen, politicians, civic rights bodies, intellectuals, interlocutors, public and religious figures all just ignore it. Anybody tries to raise the voice against this Islamic menace, is immediately branded as communal and a threat of secularism. 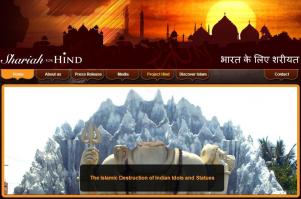 But, now the real threat of Indian secularism and democracy alias Shariah is right to rock the wall of democracy as believed as Indian Parliament put under an attack again on 3rd March, 2012 after its first attack on Indian parliament on 13th Dec 2001 by Lashkar-e-Toiba & Jaish-e-Mojhammad joint move to finish all the peoples representatives (Members of Indian Parliament) to capture India through an Islamic insurgency in India. But, still the politicians, administration, judiciary, intellectuals, media all feel too much sleepy and all the members of Indian Parliament (Bharatiya Samsad) are yawning in the ongoing sessions there.

But, a part of Indian patriotic and law abiding people are very much concerned to see a dramatic permissiveness of the Indian Political, Executive and Judiciary system, when this “Shariah for Hind”   Project openly declares:

(1)  After weeks of preparation Shariah4Hind would like to announce the official programme for the planned rally for Shariah, in the heart of New Delhi, India on 3rd March 2012.

(2)  We encourage all Muslims who have not already pledged their commitment to the event to ensure they abide by regulations set on the day. For those intending to garner further support for what is likely to be a momentous event we encourage you to download our flyer (to be provided shortly) and distribute them in key Muslim areas in India.

(4)  Muslims will be demanding the immediate return of the Shariah in the Indian subcontinent and their complete rejection of the Indian constitution.

(5)  All protestors will continue to occupy the area until demands are met. Rally of Muslims to rise and unite the Indian subcontinent under Islamic governance.

(6)  Address by Sheikh Anjem Choudary, Judge of the Shariah Court of the UK on the motivations behind the Shariah4Hind project including the declaration of a fatwa regarding Indian political parties.

(7)  Address by special guest speakers from India exposing crimes of the Indian government and why it is prohibited for Muslims to participate in the Indian elections.

(8)  Open invitation to accept Islam by former Hindu, Abu Rumaysah, who is now a key person of Islamic conversion and a senior representative of Shariah4Hind.2012

(9)  The End of Bollywood in 2012 and Bollywood will get the Axe under Islam and Shariah.

(10)  The eventual Islamic destruction of Indian Idols and Statues. 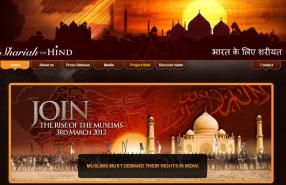 All these horrific destructions of the Indian structure of Secularism and democracy do not bother our system of Politics, Executives, Judiciary and intellectuals so far. The International propagators of Radical Islam are permitted visa by Indian Government to use our soil to destroy our faith in secularism and democracy, but the same administration expelled Salman Rushdie from his expected participation in Jaipur Literature festival (20-24 Jan 2012) before the stanch protest of the Muslim protesters. This contradiction has a subtle meaning of Indian bow down to Islam, though unpalatable to speak or hear.

The process of expansionism of Islam in India through various means including the population explosion, demand for reservation in political, administrative and economic spheres, running the parallel education system in Madarshas and deemed Islamic universities, financial capture of Islam in the sectors of media, cheat funds and banking operations, spread of Jamaats (Islamic preaching parties)more than ten times than 1950 (the year of promulgation of Republic in India, since the Islamist are planning to make an Islamic Republic here), terrorizing the common people through blasts and attacks in the name of Jihad, all these are very prudently set under the present project of Sahriah for Hind as a part of Pan Islamic march to invade the world beneath one crescent flag of Islam.

But this open declaration for denouncing the Indian Constitution by the Indian Muslims (fomented by their Pan Islamic counterparts)  through an official permission from GOI to uphold Shariah for Muslims and the others afterwards under pressure is an unprecedented one. We should stop ‘Shariah for Hind’ at any cost’.

Stop 3rd Mar Delhi Rally of “Shariah 4 Hind” at once.

22 comments on “CHALLENGERS AGAINST INDIAN DEMOCRACY MUST BE PROSECUTED. STOP “SHARIAH 4 HIND” AT ONCE.”

This entry was posted on February 19, 2012 by hinduexistence in Attack upon Hindus by Muslims, Bharat (India) under Attack, Breaking India, Conspiracy against Hindus, Hindus under Islamic Aggression, India under Islamic Aggression, Jihad in Hindustan, Save India from "Shariah for Hind" Project. and tagged "SHARIAH FOR HIND" PROJECT, Attack Indian Parliament on 3rd March 2012, Bollywood will get the Axe under Islam, bring back India again under Islamic rule, Destroy all Indian Idols and Statues, Destroy Indian Secularism and democracy, End of Bollywood in 2012 under Shariah, Indian subcontinent must under Islamic governance., Open invitation to accept Islam, SHARIAH 4 HIND.