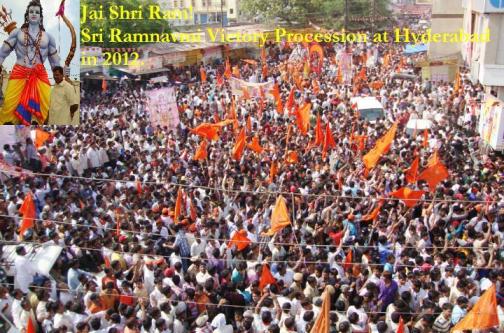 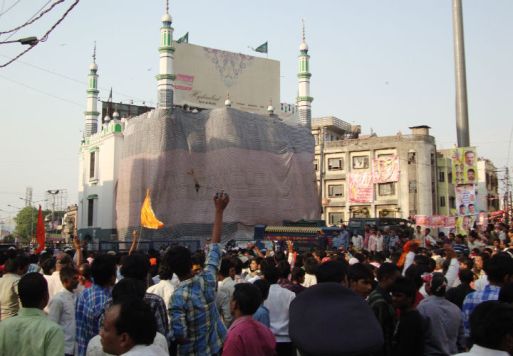 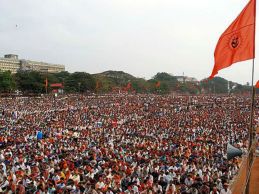 Only Hindus in such a joint combination can teach a right lesson to the Islamists allover. Mosques kept covered, Muslim felons went underground in Hyderabad when Devotees of Lord Rama flooded the roads in Ramnavami Procession 2012. Yes, the pigs can be roasted as per your dish of like.

Glorious Victory of Hindus in Bhagyanagar. It’s Hindu unity again proves its enormous strength to ‘cow down’ the ‘Islamic bull’ in Bhagyanagar , where anti Hindu Congress Party and its ally MIM took a challenge to stop the Ram Navmi Procession at any cost.

Bhagyanagar has set an example that if such rallies are organized in each state twice a month in different places with a definite Hindu Cause with the whole hearted participation of all the Hindu Wings jointly, the Islamic demon in India have to take an refuge in Pakistan or Afghanistan without any option.

Bhagyanagar Shri Ram Navmi Utsav Samiti along with other Hindu organizations successfully organized grand procession in the city today on 1st April Sunday at 12 PM. The Shobhayatra created history with presence of more than 1.5 lakh devout Hindus. As per Shriram Channel’s Facebook page, more than 3 lakh Hindus participated in the event.

Also it was slap on the face of those, who tried to brand this Shobhayatra as ‘threat to communal harmony’ as there was not even single violent or unlawful incident. 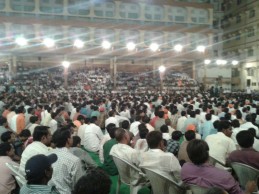 The procession has faced lot of obstacles especially from the anti-Hindu Congress Government in Andhra Pradesh and its ally a Muslim political party MIM (Majsilh e Ittehadul Muslimin) . MLA of MIM Akbaruddin Owaisa had demanded complete ban on procession taken out in the city on the occasion of ‘Shriram Navami’ and ‘Hanuman Jayanti’. Subsequently, Hindu leader Sriman Thakur Raja Singh had been arrested with fake case few days ago. The procession was expected to be grand than last year and it appeared also by the Grace of Lord Rama.

From Delhi, Maharashtra and Karnataka, several Hindu organizations took part here. Bhagat Singh Kranti Sena, Sri Ram Sene, VHP and Hindu Janajagruti Samiti were participated. Special guests were VHP’s Mr. Surendra Jainji and Sadhvi Prachi Devi. Hindu leader Shri T Raja Singh in his short speech said, “ The Congress government will never do anything for Hindus. If you want to save this country and save Hindus, then completely oust the Congress government .”

While addressing the youth Shri Singh said, “This country’s youth have to fight and raise their voices. Each Hindu brother have to be like our national heroes Bhagat Singh and Chandrashekhar Aazad”. Compared to the last year the police didn’t force the Hindus to divert their regular route.

Like no surprise this time also the police seemed protecting Muslim Masjids (mosques) rather than lacks of Hindus participated in the procession. (One should note that Hindus had never attacked Mosques or Churches in the processions taken out on the occasion of Hindu Festivals. Such acts of Police expose their pro- Muslim stance !)

Inspiration from Sadhvi Prachi. HJS participated in the Rally actively.

Sriman Thakur Raja Singh with the idol of Prabhu Shriram. The Key to open the deadlock.

2. Groups of kids who were dressed as Shriram, Lakshman, Sita Mata, Hanuman and Vanar played various incidents in Ramayana.

3. The length of the procession was 7 kilometers.

5. Even though there was lot of pressure on the organizers, the procession has moved smoothly.

6. In Indur (Nizamabad) district, Bajrang Dal has taken the ideal of Shri Raja Singh and they organized a procession in Bodhan town also. Next year this pattern of Sri Ramnavmi rally will be conducted in every state in India including  Ayodhya.

7. No communal tension could be irrupted by the islamic zelots under keen vigil of Ram devotees.

8. The entire city was kept calm, cool and clean. No incident of public nuisance or  disturbance seen in such a mammoth gathering of Ram devotees.

9. The hospitality of Hyderabadi Hindu-Sikhs is worth mentioning.