A Black Phase in the History of West Bengal. The nasty repression upon Hindu Organisations and Hindu Leaders by TMC Government. 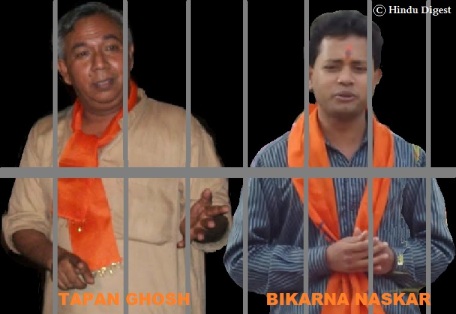 Upananda Brahmachari|  Kolkata | 15 March 2013:: Sri Tapan kumar Ghosh, one of the Founders and President of Hindu Samhati (A prime state level Hindu Organisation in West Bengal)  was arrested on 14-03-2013 morning and was produced in Bankshall Court by Kolkata Police in afternoon. As the actual case caused in S 24 Pgs (Kultali PS), he was  placed into transit remand accordingly. Subsequently, he was produced at  Baruipur ACJM Court on 15-03-2013.  Unfortunately, the bail has not been granted and next date for hearing is fixed on 28-03-13 for Kultali PS Case No. 71/2013. Advocate Samir Pal, Advocate Shantanu Singh, S G Das, Legal Advisor HS, Swarup Dutta, HRA and others were present in Baruipur ACJM Court. The legal cell of Hindu Samhati is contemplating to move Judges Court, Alipore as the case has no material for the charge under 307 IPC. No heavy injury report could be produced by the state. The other charges against Shri Ghosh are  147/148/149/332/333/353/427/152/153/109/186/507/186 I.P.C.

It is really a Black Phase in the History of Bengal. A nasty repression is rolling over the common Hindus by various means by the pay-loader of West Bengal State Police under the specific instruction of WB CM, Mamtaz Banu Arjee. All Hindu Rights for Social Demands/Programmes/Organisations are totally under a TMC (Total Muslim Congress) oppression and grossly violated. The Bail plea for Hindu Samhati President was rejected in the afternoon.

Now the Basanti Police Station came all on a sudden this evening at 5 Bhuban Dhar Lane, Kolkata – 700 012 to arrest (read ‘abduct’) Sri Bikarna Naskar, one state leader of Hindu Samhati. As per latest news, Bikarna is under 3rd Degree torture by a Police Inspector named Shaidul. DID YOU WANT THIS ISLAMIC CHANGE IN BENGAL? PROTEST. PROTEST. PROTEST. Write wall to free HS Leaders. Organise protest rally, give written deputation everywhere.

Though Sri Tapan Ghosh’s confinement is connected with Jalaberia Protest over Canning Violence upon Hindus, it is not clear about the arrest of Sri Bikarna Naskar by Basanti Police troop in civil dress.

It is reported that the police is trying to give some arms cases to Bikarna to book him for a long time, so that he cannot proceed for his normal Hindu organizational work.

The Police action upon the Hindu activists are all time high in West Bengal. Just on 07 March 2013, the Hindu Existence Forum arranged the bail of Five HS activists under Usthi PS from Diamond Harbour Criminal Court (Usthi PS Case No 40/13).  Sri Tapan Kumar Biswas, Ld Advocate pleaded successfully to arrange the bails for 1) Bablu Ghosh (S/O Sushil), 2) Goutam Mondal (S/O Joydev), 3) Probir Naskar (S/O Jatin),   4) Dilip Naskar (S/O Panchanan) and 5) Pratap Hazra (S/O Judhisthir Hazra). Sri Pratap Hazra is a prominent dist. level leader of Hindu Samhati of South 24 Parganas, a Islamist prone southern district of West Bengal. The bail for Pratap and others was granted on the condition of attendence to Local PS, thrice in a week, until further order. The Charges were framed u/s  147/148/149/295A/323/325/379/506 and 392 IPC. But, the Advocates of Hindu Existence Forum moved for this case very tactically and arranged the bail in a record shortest time.

Now, it has been confirmed that Sri Saurav Shasmal,  one of the prominent whole timer of Hindu Samhati was arrested from Kakdwip (South 24 Pgs) on Thursday and sent to Diamond Harbour Jail on Friday (15-03-2012) with another HS activist. Sasmals were arrested when they were conducting a protest meeting at Kakdwip with a demand to free Tapan Ghosh immediately. IPC 153/153A/295A etc. have been mentioned in the FIR, as being stated. (This para is updated on 17-03-2013).

The situation of West Bengal is speedily worsening due the limitless appeasement of Muslims at the cost of Hindu oppression.

HINDU EXISTENCE RED ALERT: A RED ALERT TO ALL HINDU ORGs AND ALL ITS HINDU LEADERS. PLZ DONT MOVE ALONE. KEEP THE PROVISIONS FOR SELF DEFENSE. PLZ ORGANIZE SHORT TRAINING CAMPS FOR SELF DEFENSE, MARTIAL ARTS AND HUMAN RIGHTS, LEGAL AIDS & RTI PROGRAMMES. WITHOUT APPROPRIATE TRAINING, HINDU ORGs ARE BASELESS. THE TOTAL HINDU SAMAJ IS FACING THESE TYPES OF HAZARDS DUE TO LACK OF SUFFICIENT TRAINING & PROPER VISION OF LEADERSHIP.

Demonstration by Hindusthan Nirman Dal & Hindu Vahini in Delhi on 15-03-2013 to Release Tapan Ghosh, President, Hindu Samhati and to protest the rampant Muslim appeasement in West Bengal and Uttar Pradesh. 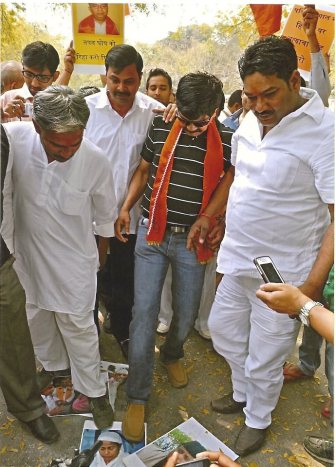 8 comments on “A Black Phase in the History of West Bengal. The nasty repression upon Hindu Organisations and Hindu Leaders by TMC Government.”