Fanatic Muslims created Communal Tensions in Delhi during and after Diwali.

Fanatic flare up in Delhi.
Diwali put on a hurdle by fanatic Muslims in Delhi.
Prohibitory orders imposed in Trilokpuri and Majnu ka Tila.

Muslims do not bear the rituals and festivity of the Hindu community very unfortunately. 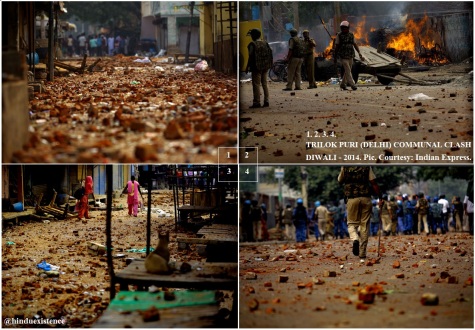 Delhi Police has finally imposed curfew and ordered to shoot any miscreant on the spot in East Delhi’s Trilokpuri locality, after communal tension erupted in the locality. Although the crowd has been dispersed now, the situation is still very tense after stone pelting between members of two communities.

Four people were shot at during a clash between Hindu and Muslim  communities over an issue of erecting a make shift ‘Mata Ki Chouki ‘ on the side of the outer wall of a mosque during Diwali festival in east Delhi’s Trilokpuri area, as per reports derived from police and others.  So far 33 people have been arrested while police said earlier that ten people were arrested Friday and 23 on Saturday for rioting in the area.

Following the incident, police rushed a large contingent of their personnel to the area to bring the situation under control. Several companies of the Rapid Action Force as well as riot control were also deployed. Senior police officers and the Intelligence Bureau sleuths are also reportedly keeping a close watch on the developments. The area DCP is also monitoring the situation. SHOs in the area have been summoned and forces from the nearby district have been roped to maintain peace and harmony.

The incident began on Thursday evening. While police did not divulge the details, sources said two communities clashed over playing of music at a religious gathering in the first instance on the trail of the total disturbance. The Muslims of the locality claimed that listening music of ‘Jagran’ of  the Hindu festivals is ‘haram’ and Allah usually turns displeased for all these.  As Muslims tried to put troubles to the ‘Jagran’ played in the music system upon some fake claims of their Imams, the tussle started in a  moment.

Hindus of the locality raised the points that they usually adjust 365 days in a year for Azan, overnight Milad-un-Nabi, Islamic Jalsa etc. without objections. But, the Muslims dare to stop Hindu festivals for some days even in Hindu majority areas by lodging complain to the police or by utter hooliganism. It is not fair. While Muslims purposely object Hindu festivals, music, drum beats and procession in front of Mosques and through Muslim localities on the plea of disturbance of Allah or Namaz , they hold Namaz in any public place, arrange Islamic functions, erect mosques, open beef shop and Muslim hotels  even in Hindu areas.  Muslims must keep in mind that this is Hindusthan-Bharat, not Pakistan or Afghanistan where fanatic Muslims always try to skip the religious rights of Hindus. Muslims in India must learn tolerance from the Hindus at least.

There was heavy stone-pelting on Thursday but police managed to bring the situation under control by Friday morning.

Two youths were arrested after which the situation turned normal. However, a scuffle broke out once again on Friday evening when Muslim started to remove the deities from make shift ‘Mata Ki Chouki’ , hundreds of Hindu and Muslim mob soon gathered frenzy and in no time stone pelting began from both sides. The situation was, however, soon taken under control by police by suppressing Islamic provocation  raised by some outsiders in the Mosque.

While police denied having opened fire, they said several rounds of tear-gas shells were fired. They had to resort to lathicharge to control the mob. A group of around 200 people was involved in the incident, police said.

A case of rioting has been registered at the Mayur Vihar police station and a search is on to nab more culprits at large. 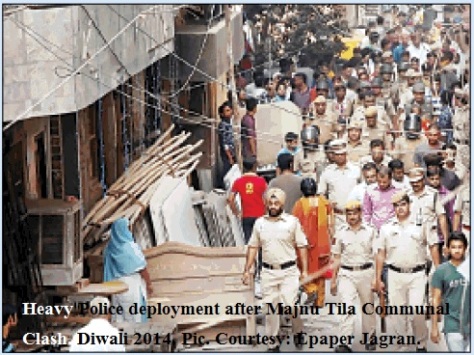 In another case, fanatic Muslims of Majnu-ka-Tila areas also tried to put disturbance in Diwali festivals in Chandrawal gaon. Some Muslims beat some Children of Mandir Gali area while they were bursting crackers on Thursday evening.  These Muslim youths came to throng from adjacent E-Block as reported.

Four policemen and about 30 people were injured in two incidents of clashes between members of two communities in Chandrawal village near Civil Lines in north Delhi, late on Thursday night and Friday morning.

According to the police, the first incident took place at about 10.55 pm on Thursday when a fight broke out between two groups at Chandrawal village, adjacent to the Tibetan Refugee Camp at Majnu Ka Tila near Civil Lines.

The two groups – belonging to two communities in the village – live on opposite sides of a common road.

“When some people from one group were bursting in the area of the other, who belonged to a different community, a fight suddenly broke out between them. The fight turned ugly when they started hurling stones at each other and also damaged buses and cars,” said a police officer.

A constable named Sonu was hit by a stone on his ear and started bleeding. He was rushed to hospital. “However the situation was brought under control in a few hours,” said the officer.

To control the situation Police had to open fire in the air and used tear gas cell.

Police has arrested eight persons for flaring up communal riots and putting hurdles to the duties of govt. officials in Majnu Tila case.

Police conducted peace march and meeting to keep off the tension prevailed in both the areas.

6 comments on “Fanatic Muslims created Communal Tensions in Delhi during and after Diwali.”