Establish the ‘Hindu Nation’, as expected by the Guru Principle ! 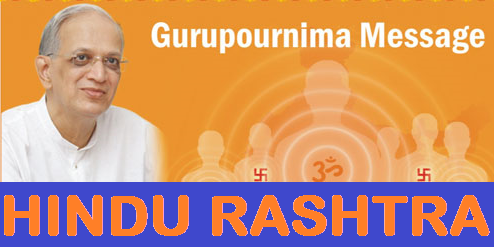 Establish the ‘Hindu Nation’, as expected by the Guru Principle !

HENB | Ponda | July 31, 2015::  The unique Guru-disciple lineage in Hindu Dharma has taught the world various Paths of Yoga such as Dnyanyoga, Bhaktiyoga or Paths of spiritual practice such as 14 Vidyas (Streams of education), 64 Kalas (Art forms).

By doing so, Hindu Dharma has ensured that the society progresses morally, culturally and spiritually. And hence, Shri Guru and Gurupournima have a  unique importance in the Hindu way of life.

The Guru is actually a ‘Principle’ which is active through the medium of Saints and spiritually evolved individuals. Ensuring the spiritual evolution of the disciple, re-establishing Dharma (Righteousness) as and when it is on the decline is the mission of the Guru Principle. Maharshi Vyas, the foremost Guru, split the Vedas into 4 parts at the beginning of the Kaliyug, and thereby established Dharma. Jagadguru Shrikrushna destroyed Kouravs and established a righteous Kingdom under the leadership of Yudhishthir.

Chanakya destroyed the unrighteous Nanda dynasty, and under the banner of Samrat Chandragupta, united the divided Bharat into a Nation. When Muhammad of Ghazni converted Hindus in Sindh, Sage Deval wrote a treatise that permitted their re-conversion to Hindu Dharma. He thereby re-established Hindu Dharma. Whilst Hindu Dharma was being ridiculed the world over,Swami Vivekanand tried to re-establish Hindu Dharma across the seas. These are only a few examples. This contribution by the Guru-disciple lineage towards establishing Dharma is a unique feature of Hindu Dharma.

Today, we have a secular system of governance in Bharat. There is a Sanskrut saying which means – A kingdom sans Dharma is a ‘secular’ kingdom. This is why, Sanatan Dharma is on the verge of becoming extinct in Bharat. As a result, the strength of the unrighteous and traitors to Dharma is on the rise. Under such circumstances, establishing the ‘Hindu Nation’ founded on Dharma to re-establish Sanatan Dharma in Bharat, is the need of the hour and the Guru Principle expects the disciples to take up this mission. Wholehearted contribution at the physical, psychological as well as financial levels by the present Guru-disciple lineage, various sects, seekers and devout Hindus will be true Gurudakshina on this Gurupournima !

Please support and spread the cause for making of a Hindu TV network: