Hindu protests mark the marred celebration to adopt a secular constitution in Nepal.

New ‘Anti-Hindu’, ‘Federal’ and ‘Secular’ constitution of Nepal is being promulgated today amidst deploying high security measures, banda, black day and burning of new constitution!  Hundreds of Hindu activists are taken to custody by Nepal Police under preventive arrest. 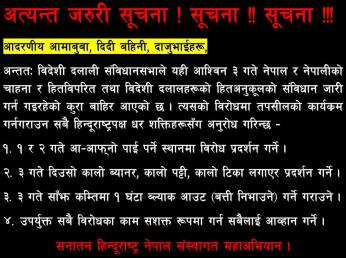 Upananda Brahmachari | HENB | Kathmandu | Sept 20, 2015:: Huge security arrangements was stepped up in Nepal on Sunday ahead of the proclamation of the Himalayan nation’s new federal constitution following a decade of political infighting, with fresh threats and violence coming from smaller political parties, ethnic groups and obviously majority Hindus aggrieved and agitated by this spate of ‘anti Hindu motives’ in the new constitution of Nepal.

Thousands of officers were guarding the streets and checking passengers on highways, said police official Kamal Singh Bam. Police have responded to reports of bombs being found in Kathmandu but they all turned out to be a hoax.

A  protest of about 50 people in Kathmandu was quickly dispersed by police and two people were detained. Police were under orders to stop any protests.

Nepalese police detain a protester during a demonstration against the government and the new constitution during in Kathmandu, Nepal, Sunday, Sep 20, 2015. Police quickly dispersed the protest and two people were detained. Police were under orders to stop any protests.(AP Photo/Niranjan Shrestha)

Security was particularly high around the Constituent Assembly building in the capital, where President Ram Baran Yadav will officially proclaim the new constitution later on Sunday at 5 pm.

Nepal’s 239-year old Hindu monarchy was abolished in 2008, seven years after an unhinged crown prince killed the king and eight members of his family, as suspected,  at the height of a Maoist uprising backed by China.

Disgruntled royalist politicians voted against the charter on Wednesday, while some parties from the southern lowlands abstained.

The Maoists laid down their arms in 2006 and joined democratic politics with an India under the then Congress Party and its spy tool RAW brokered a ‘mysterious’ peace deal that paved the way for the new constitution. Cumulative wrangling hampered progress on the draft and several governments have come and gone in the interim period. 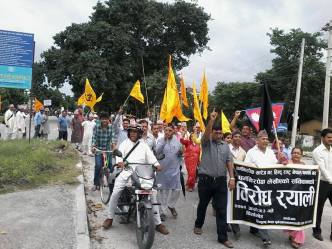 Hindus came out in Protest Rally on Sept 20 at Kathmandu, against promulgation on New Secular Constitution in Nepal. Pic. HENB.

Madeshi stronghold areas and the Terai region in Nepal is observing today as black day by hoisting black flags in roof tops.

Seeing these nation-wide unrest against the constitution before promulgation, one CA member and CPN-UML (Communist Party of Nepal – Unified Marxist Leninist) leader, Khadga Prasad Oli said, “The constitution is not something that cannot be absolutely changed. It can always be amended later when needed.”

Majority people who believe the country’s reference as a Hindu nation should have been restored in the constitution, today observe as a ‘black out day’ in various parts of the country. The Hindu organisations want a Hindu State in Nepal called the country men today to hoist black flag, make out protest rally wearing black badges and put off light during the promulgation of the constitution during 5 pm to 6 pm today.

Majority Hindus in Nepal are now condemning the Christian conspiracy, Chinese ploy, Political bankruptcy and Indian indulgence for not being the Hindu Rashtra in Nepal under a big international intrigue against the will and wish of common people of Nepal.

As per the report of News Abhiyan, 40 Hindu activities are taken into the custody of Kathmandu City police for the smooth promulgation on ‘Secular’ constitution of Nepal. In an emergency like situation Nepal police are arresting Hundreds of Hindu activists as preventive measures.

At Baneshwor, Sagar Katwal, the convenor of Rashtrawadi Yuva Manch along with over 50 of his team members have been courted arrest while demanding a Sanatan Hindu Constitution & burnt the copy of Secular Constitution of Nepal. .

A rally will be held at Baneshwor again at 12pm tomorrow to protest against anti-Hindu Secularists and Secularism in Nepal.

4 comments on “Hindu protests mark the marred celebration to adopt a secular constitution in Nepal.”