Now IS and other Jihadi modules are trying to target Hindu Festivals in India for maximum casualties.

Islamic State may target Delhi during Dussehra, Diwali and Dhanteras. Intelligence alert of possible Jihadi terror attacks in Kolkata during Durgapuja. Renowned Hindu Temples may be targeted in these days. 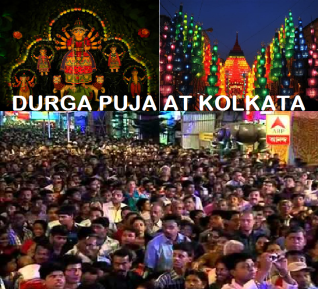 HENB | New Delhi and Kolkata | Sept 30, 2015:: Now the Islamic States and home grown Jihadi affiliates are trying to attack the gathering in Hindu festivals like Durgapuja, Dussehra, Diwali and Dhanteras to perpetuate maximum casualties. This dangerous motives of the Islamists though moved the Indian intelligence on alert, the Indian Home Minister still sees that the IS is not a big threat at all to India.

Consequently, main Hindu Temples of the metropolis and big cities may be under target of the Jihadis as these temples are generally overloaded by the Hindu devotees in these festival days of highest importance.

The Security agencies in India have alerted Delhi and Rajasthan police about possible terror strikes in their areas by the Islamic State during the festival season. The alert of same nature has been delivered to the Kolkata Police also.

The High Sources said,  Delhi Police’s intelligence unit had forwarded the alert to the special cell, which is now developing leads on the basis of the inputs. In Delhi, intercepts suggest the attack could be carried out by a “lone wolf”, or a single member of the outfit. However, with the possibility of SIMI members working for IS, an attack involving two-three men cannot be ruled out either. These lone modules or small fidayeen groups can emerge suddenly from the sleeper cells already existed in Delhi, Jammu, Jaipur, Kolkata or may sneak into the target areas from Kashmir, Punjab or neighbouring Nepal or Bangladesh.

The banned students’ terror group SIMI (Student Islamic Movement of India) was always known to be operating in small groups and this modus operandi was later adopted by Indian Mujahideen. Though SIMI is a banned organisation in India, but new wings of SIMI are active in India in a shape of SIO (Students Islamic Organisation) and in other unknown groups most probably.

In this connection, Indian parliament may be attacked again by these Jihad Students’ modules under specific tip off, as one of the founder member of SIMI is now a Rajya Sabha (Upper House of Indian Parliament) member.

Delhi’s vulnerability has grown manifold with the merger of Islamic State and AuT (Ansar-ul-Twahid), which has been voicing its plans to target India for some time. These joint venture of different Jihadi groups are being backed by the Pakistan and ISI, as the sources said. HENB has recently reported about probable joint operation by ISIS and Pakistan intelligence agency ISI as looming large in the Indian security spectrum.

In September last year, AuT had even threatened to avenge the 2008 Batla House encounter in Delhi and termed the slain terrorists as martyrs on the social media. 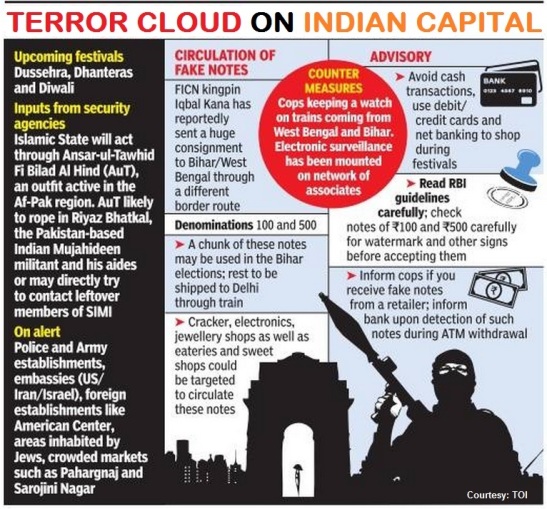 An offshoot of Indian Mujahideen, AuT was launched a few years ago. It comprises jihadi elements from the Af-Pak region and IM operatives who had rebelled against the leadership of Riyaz and Iqbal Bhatkal to fight in Afghanistan. AuT is now throwing its weight behind IS.

Besides, agencies have been warning Delhi Police of impending threats and possible recruitments by IS. A few months ago, agencies had communicated to the police commissioner about an online recruitment drive being undertaken by IS.

IS (Islamic States) or the ISIS (Islamic States of Iraq and Syria) has been extensively using social media to radicalise youths and has tapped nearly 30 youngsters in north India in recent months. A few of them are also arrested by the police in different states.

“Agencies have a list of youths who were contacted by IS and AuT. They have written to us to keep a watch on the online activities of these outfits. Last year, AuT uploaded video messages from various IS operatives, including the Friday sermon of its chief Abu Bakr Al-Baghdadi in which he called for a jihad against India,” said an officer.

Apart from this, Delhi also faces threats from Lashkar-e-Taiba (LeT) and Jaish-e-Mohammed. However, with the special cell lying dormant for the past few months, Delhi’s security doesn’t seem foolproof for the time being.

From the Northern and Western sides of the country the Jihadi wave is now spread up to the eastern side of India as Kolkata is also under the same Jihadi threat in this festive season of Durgapuja.

According to central intelligence agencies issuing an alert on possible terror strikes in congested areas during the festive season, the National Security Guard (NSG) has begun preparing itself for all possible contingencies. The Black Cat commandos based at Badu near Madhyamgram have now shifted focus from high rises to random targets where terror strikes could cause severe damage. The NSG will conduct drills at these locations after dark as well.

On Tuesday morning, a NSG detachment from Badu boarded a Mi-17V5 helicopter at the Kolkata airport and headed due north to Sodepur in North 24-Parganas. Their target was the roof of a biscuit factory in a congested area close to the busy BT Road. Locals watched as the helicopter hovered barely 30 metres from the ground as commandos rappelled down to the roof.

As per TOI reporting, ‘*’the biscuit factory wasn’t deserted and to make things as real as possible, a team of commandos took employees ‘hostage’ while the other one was assigned to carry out the rescue. As per the NSG’s Standard Operating Procedure (SOP), the most experienced commandos played the role of terrorists and made rescue operations as difficult as possible for the assault team. In this way, all possible strategies that may be adopted by terrorists get covered.

“This raid was also a learning experience for the Indian Air Force pilots. They practiced how to zoom on to a particular target that is not too well known as a city hotel. The commandos will carry out similar operations at the same location on Wednesday evening. The night operations will throw up new challenges to the commandos and help them work out new strategies,” the official added.’*’

Though the secular morons reject any religion of the terrorists, it is obvious that these Jihadi terrorists have their brutality tagged with Radical Islam and they want to destroy the infidels, kill the Kaffirs.

In this context, the Hindu festivals of Dussehra, Diwali, Dhanteras and Durgapuja are the prime targets of the IS, ISI, LeT, JeM, SIMI, IM, AuT and other Jihadi groups in a very dangerous manner.

__with input from TOI and PTI.