Shows of Bajirao Mastani cancelled in Pune after Hindu protest led by ancestors of Peshwa and Chatrasal. Effigy of Sanjay Leela Bhansali burnt.

NATIONWIDE PROTEST SEEN AGAINST ‘DILWALE’ AND ‘BAJIRAO MASTANI’. WHILE SRK STARRED DILWALE  FACES AN REPERCUSSION AGAINST HIS ‘INTOLERANCE REMARKS’, BAJIRAO MASTANI IS TARGETED FOR ITS ‘HISTORICAL DISTORTION’ AND HURTING ‘HINDU SENTIMENTS’. (for details see links). 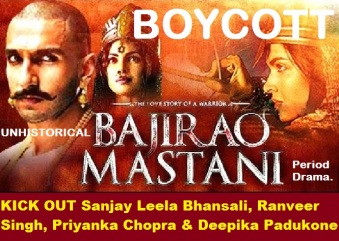 HENB | Pune | Dec 18, 2015:: City Pride theatre at Pune cancelled three shows of the film ‘Bajirao Mastani’ on Friday after protest by the Bharatiya Janata Party and other Hindu outfits.

The descendants of Peshwa and Chhatrasal dynasty had organised a protest at Shaniwar Wada on December 12 against Sanjay Leela Bhansali’s upcoming period drama which stars Ranveer Singh, Priyanka Chopra and Deepika Padukone.

The Hindu protesters had gathered at Shaniwarwada, the ancestral capital of Peshwas to condemn the promotional videos and songs of the movie and alleged that the film is an attempt to distort history. Reportedly, the protest was led by Undaysinh Peshwa, the descendant of Peshwas, who was joined by Kothrud’s BJP MLA, Medha Kulkarni, the descendant of Chhatrasal.

Several BJP workers  and Hindu activists gathered outside Pune’s Citypride cinema today morning and started protesting against Bhansali and others for what they claimed was distortion of historical facts. The protesters said that the movie shows distorted facts about the era of Peshwa rulers.

Produced and directed by Bhansali, Bajirao Mastani, narrates the story of the Maratha warrior Peshwa Bajirao and his second wife Mastani. While Ranveer Singh and Deepika Padukone play the lead roles, Priyanka plays the role of Bajirao’s first wife Kashibai.

As per potestors’ allegation, the film lowered the dignity of the historical figure. It is told that time-frame of the period drama is quite unhistorical and mixed with spicy elements rejecting all truths.

On the occasion, the protestors burnt an effigy of Bhansali and shouted slogans against the movie and anti-Hindu & anti-Martha conspiracy sprouting in Bollywood.

Source: ANI and You Tube.

Courtesy to the links.

One comment on “Hindu protest at Pune against ‘Bajirao Mastani’. Effigy of Bhansali burnt.”