Nobody will take these 10 steps to stop Malda or Purnia like Riots permanently in India. 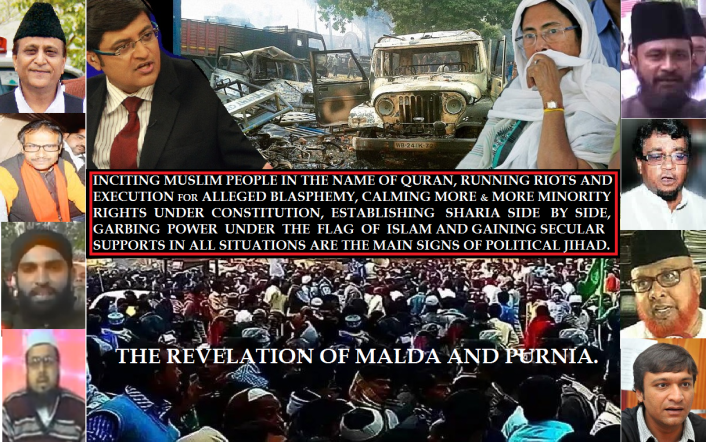 Blotting Paper on Malda Riot and 10 steps never be taken for the sake of Ballot Paper.

Upananda Brahmachari | HENB | New Delhi | January 14, 2016:: Bundle of blotting papers are now being used in Malda to soak out the blood, tears, anxiety, insecurity of the victimized Hindus and peace-loving people of Malda after Sujapur-Kliachak Riot commenced on 3rd of January by 100% frenzied Jihadi mob fetched by a communal Islamic organisation named Edara-e-Sharia.

On the Mayhem Day of January 3rd, some fanatic Muslim mob of 1.5 lakhs gathered the vicinity of Sujapur area of Malda, advanced through NH 34 and finally registered their Jehadi wrath over Kaliachak police station, trashed the police personnel on duty,  driven them out, set fire to the police barrack, captured the police station, burnt all files and records, stranded the local minority Hindu people by looting their shops, breaking vehicles, destroying public properties, molesting women, violating the dignity of worship places, shooting the protestant guys and eventually mingled with the Islamic peace overwhelmed in the state of West Bengal. This was a planned Jihad warfare by Edara-e-Sharia to show their strength in the eastern side of India so that the upsurging political Jihad in Bengal can be successful in coming WB Assembly election of 2016.

We know the tale of King Nero playing violin while Rome was burning. In the same way Bengal CM was engrossed with the arrangements for listening the Gazal of Ghulam Ali in her sate capital while situation of Malda was on fire.

Actually, the role of Mamata Banerjee for flaring up Malda riots cannot be denied anyway after it is exposed in a debate show in the Times Now.

Those who are criticizing Mr. Arnab Goswami’s “360° change” for attacking the secular lobby in the said debate or clearly to accuse the fundamental Islamic lobby for creating ‘law and order situation’ or ‘Hindu-Muslim Riot situation’, they must rightly think the scale of violence in Malda. It is shocking, it’s traumatic. In such a crisis, one looses his sense and other gets the sense of reality. Finally, Arnab gets in touch the taste of ‘Radical Islam’ and we must welcome him in the sphere of struggle for civil existence against the deadliest thrust of Jihad.

At the same time we must show our regards to the social media, the team of Hindu Existence Forum, Hindu Samhati, Hindu Janajagruti Samiti, RSS Cyber cells etc. who unearthed the reality of Malda Riot to the public in every turn of time and compelled to drag Zee News and Times Now in the middle of Malda Mayhem.

But, what is most disgusting that the same secular, intellectual (actually moron) and political lobbies are not ready to understand their ‘fedayeen’ (self sacrificing) role to paving a brutal Jihad in India for their ultimate love for ballots. And the most embarrassing scene is that that the fundamentalist like Nurar Rehman Barkati of Kolkata Tipu Sultan Mosque (who pronounced Fatwa to slain Taslima Nasrin; organised Namaj-e-Janaja, i.e. obituary rites for Osama-bin-Laden in Kolkata and criticized Calcutta High Court’s order on banning Cow slaughter in a very bad light)  or same type Muslim clerics are invited in TV talk shows and allowed to say rubbish like Islam is peaceful, ISIS or Daesh is not Islamic, Malda Riot and others are not made by Muslims, Jihad and ISIS are American plan to defame Islam and Muslim people  etc. etc.

It is very much clear here, when the ballot lover people (all parties including BJP) is defending Riots, Mayhem, Islamic excesses like Malda or Purnia for their political gain, the Islamist people like Maulana Golam Rasul Balyavi, Ahamed Hasan Imran or Nurar Rehman Barkati are trying to make India another Pakistan or Taliban land under the flagships of Edara-e-Sharia or anything else.

In this critical juncture, nobody is interested to take strict steps to curb down the frenzied people against India and its peace-loving majority people.

This is the story of supplying blotting Papers in the riot hit Malda and Purnia to soak out tears, bloods, anxieties of victimized people there and 10 steps as stated above as remedies will never be taken by anybody for the sake of Ballot Paper.

4 comments on “Nobody will take these 10 steps to stop Malda or Purnia like Riots permanently in India.”