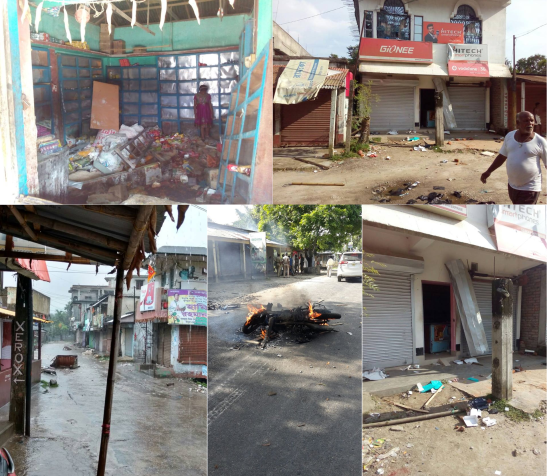 Hindus in Chopra (Uttar Dinajpur, West Bengal) are attacked by Fanatical Muslims on the day of Eid. House looted, two-wheelers put on fire, many injured. Police says ‘BSF took control’. Where is the ‘Secu’ Media?

The whole of the present incident reflects the position of Hindus in coming days in Bengal where they will become a minority in near future.

Yesterday (July 6), Hindus of Nainital colony and Kanchakoli observed the Ratha Yatra (Chariot Festival) against a fatwa of the local Muslim fundamental elements. The Muslim anti-socials of the area along with some Mosque clerics (some of them may be Bangladeshi Muslims) issued that Fatwa that minority Hindus could not observe “Ratha Yatra” so that infidel programme just before the Eid-ul-Fitr would make the atmosphere ‘Na-Pak’ (filthy). Announcement from local mosques through loud speakers were made and Hindus were threatened to stop Ratha Yatra accordingly.

Hindus of the locality were not ready to stop their Ratha Yatra and continued it. Seeing this, Muslims of the locality got furious and attacked the Ratha (Chariot of Shri Jagannath-Balaram_Subhadra) yatra procession at Kanchakoli area at about 4.30 pm. Hindus anyway managed the situation and completed their procession by evening.

But, such an act of minority Hindus for observance of their festivals defying an Islamic order to stop it irked the radicals in that area and chalked  a plan to attack Hindus in the day next just after the Namaj of Eid. The plan was made overnight in different mosques in that area.

According to that grand plan to attack Hindus on Eid-ul-Fitr Day, armed Muslims started attacking Hindu houses, shops and families after offering Namaj with a huge and frightening slogans “Allah-hu-Akbar” and “Dinajpur-Dinajpur, Hindu tomra bhago dur”, etc. Incidentally, all these areas of disturbance are located just near WB-Bangladesh international border.

Local Muslims with many of outsider Muslims started looting of Hindu shops, snatched ornaments from ladies, put fire on two-wheelers and households and even tried to molest the teen-aged Hindu girls. Frightened Hindus started leaving their houses under lock and key. But, Muslim hooligans were only enjoying the looted booties even breaking the lock of the houses and shops.

In some places. Muslims put heavy wooden planks in the road as the police would not enter the place and it was reported a disruption of conveyance in NH 31. As per report police dared to enter the affected places and called BSF to take control.

As per latest news, the sword wielding Jehadi hooligans came on mini-motorized transportation from here and there and attacked the Hindus shops in Chopra market. Hindus were asked to pay huge ransom for running business in Chopra market further. A complete Jihadi control in the area put the Hindus there under gross insecurity and utmost vulnerability.

It is reported that one heaviliy injured Hindu named Haripada Debnath could not be shifted to Siliguri Medical College and Hospital after being referred by local Dolua Primary Health Center for immediate better treatment. The leading road from Chopra to Siligirui was also blocked by the Jehadi Muslims after an evening Eid Milan (Eid get together) at nearby Ramganj Market. Haripada has multiple fractures with head injury. It is believed that he was ruthlessly beaten by the follower of “Religion of Peace”. Many Hindus were injured in the attacks and being treated locally anyway.

But no effect in Chopra, WB.

The Ratha installation of Ramganj Basak Para were tried to put on fire. As per report some local temples were also attacked by the Jehadi Muslims. In most of the cases TMC supported Muslim hooligans were behind the scene.

Interestingly, the peaceful namazis of Ramjan Eid did not spare a local TMC leader (local ruling party in WB), named Mihir Sarkar and his brothers. Competing the namaz of Ramjan Eid, the Quran followers attacked their houses and looted rampantly. The upper-hand Jehadis never make any difference of the political colors. They just judge whether the opponents are Momin (believer) or Kaffir (disbeliever). It is learnt that Mihir felt very anxious after hering this news from Kolkata as he was out of station by then.

The whole of ‘presstitute’ Media (National and Bengal both) is taking the delicacy on Eid and they have no time to cover this ranting cry of Hindus of Chopra.

When contacted the District Police authority was not ready to divulge the updates but conveyed that BSF (Border Security Force) took an control as the entire areas fall in the international BD-WB border zones.

Further details will be updated when available. This is not just a reporting, still majority Hindus in Bengal must think seriously about their impending future in an ‘Islamic Bengal’.

‘Islamic Bengal’? It is not sufficient to react with the coinage. Please act to get rid off the situation.