Strong protest in Nepal’s Birgunj against the attack on Hindus in Brahmanbaria, BD. 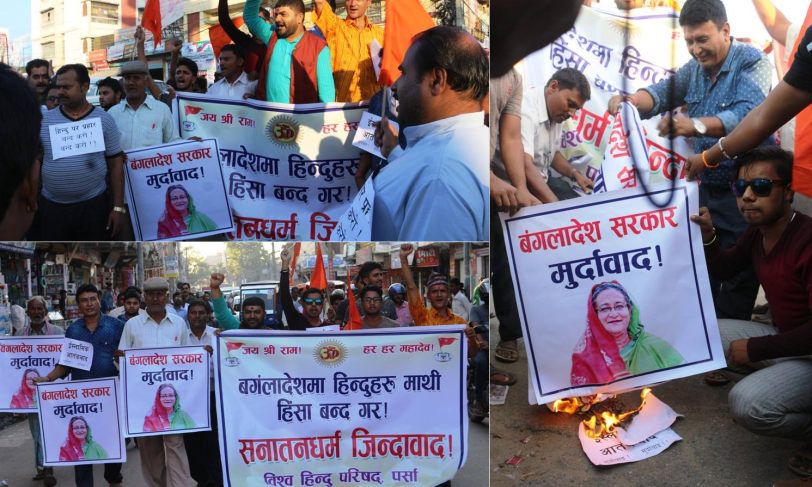 The Parsa unit of  VHP Nepal along with  Hindu Swaymsevak Sangha and Vishwa Hindu Mahasangha protested vehemently against the recent torture on Hindus including destruction of 15 Hindu temples, attack on Hindu elderly, women and children with lethal weapons, looting and arsoning Hindu homes and shops in Bharhmanbaria district during Diwali time.

Hundreds of Hindus came to street of Birgunj today with placards written with “Stop attack on Hindus in Bangladesh”, “Stop Islamic Terrorism in Bangladesh”, “Down Down Bangladesh Govt”, “Stop violence on BD Hindus”, “Punish the culprits” and so on. A strong rally condemning the recent ‘Jihadi violence on Hindu minorities in Bangladesh‘ started from Ghaba Mandir Park, walked through different streets and lanes on Birgunj and ended at  Ghantaghar.

Pandit Purushottam Dubey, president VHP Parsa Unit led the rally and delivered his speech at Ghantaghar by demanding an International probe by UNHRC and other Rights Orgs on the recurring violence on Hindus in Bangladesh by Islamic fundamentalists.

The rally also demanded a greater Hindu unity for right and immediate intervention to take cognizance on any such attack or atrocities on Hindus anywhere in this world.

An effigy of Bangladesh PM Sheikh Hasina was also burnt at the end of rally with ‘Shame Shame’ slogan.

Interestingly, the VHP, RSS, other self proclaimed Hindu protectors are still busy in India to complete its memorandum on the Diwali violence on Bangladeshi Hindu minorities or to chalk out any protest rally in Kolkata, Delhi, Mumbai, Chennai, Bengaluru or Hyderabad.

Thanks to Birgunj Hindus who pioneered the international protest this phase to condemn the violence on minorities in Bangladesh!

2 comments on “Strong protest in Nepal’s Birgunj against the attack on Hindus in Brahmanbaria, BD.”