Oh Calcutta!
Balochitan meet denied in Capital of the Islamic Republic of West Bengal under Her Holiness, Khalifa @MamataOfficial Banerjee.

Zee News Bureau | New Delhi/Kolkata | Jan 6, 2017:: The West Bengal government has allegedly forced a club in Kolkata to cancel an event about the restive Balochistan province.

The event called “The Saga of Balochistan, What the World Needs to Know” was scheduled to be held at the Calcutta Club on January 07.

However, it now stands cancelled.

According to Pakistan-born Canadian author Tarek Fatah, the club cancelled the event, in which he was to speak on Pakistan’s atrocities in Balochistan, under the pressure of the Mamata Banerjee government.

He further asked if the West Bengal Chief Minister was supporting Pakistan.

Fatah posted a screenshot of an e-mail sent to him by the club.

The club said the event was called off in a bid ‘to ensure cordial atmosphere’.

In an e-mail sent on January 04 to the organisers, the club said it was not in a position to hold the event due to “unavoidable circumstances”.

“It would not be possible to hold the said programme on the club premises. Being a private social club we would like to ensure a cordial atmosphere in the club,” Ranjit Dutta, club CEO and Secretary wrote.

When contacted, club representatives, however, said they have no information on the event. “There are no events like that in the club. We have no such information,” a club employee said.

Meanwhile, Colonel Diptangshu Chaudhury, one of the event’s organisers, was quoted as saying by DNA: “The club had agreed to hold the event. On December 30, an executive meeting was called and we were asked to drop the word ‘Kashmir’ from the event keeping in mind the issue being sensitive. We had agreed on that and we got new passes and posters printed without the name Kashmir on it. On January 4, suddenly we get a mail from the club authorities that they have called off the event. We had paid the advance too. Now it is impossible to shift the venue in such a short notice.”

The Kolkata Police denied the allegation and said the cancellation was an internal decision of the club.

“The club submitted a letter day before yesterday (Tuesday) asking permission for the event but the very next day they informed the event has been cancelled. It is a decision of the club authority. They would be in a best position to say why the event got cancelled,” Vineet Kumar Goyal, Additional Commissioner of Kolkata Police (I), said.

Here is the series of tweets by Tarek Fatah : 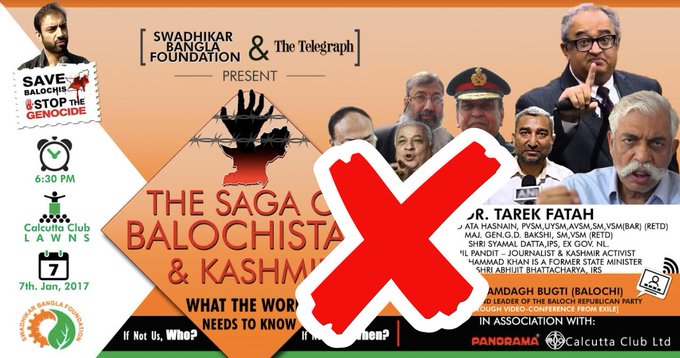 Oh Calcutta!
Capital of the Islamic Republic of West Bengal under Her Holiness, Khalifa @MamataOfficial Banerjee. 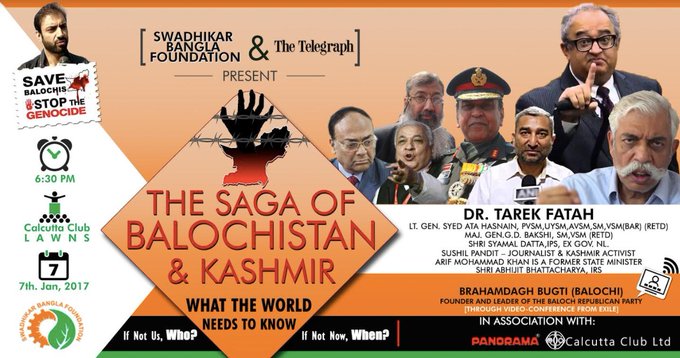 (2/2) First W.Bengal Govt put pressure on organizers to delete word ‘Kashmir’ from the poster (see the 2 versions) then cancelled the event.