Decision on Ram Temple within a week: Dr Togadia. 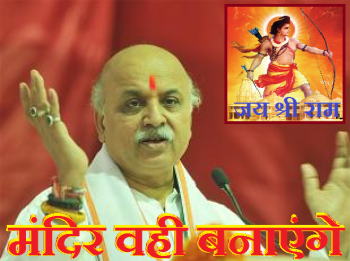 PTI | Mathura | March 3, 2017::  VHP leader Praveen Togadia today hinted at the Hindutva outfit contemplating some move for the construction of the Ram Temple in Ayodhya, claiming a decision on the issue may be taken “within a week”.

“Karenge (we shall do something),” VHP International President Togadia replied when asked if VHP would take steps for the construction of Ram Temple owing to indifferent attitude of union government on the issue.

“Decision for the construction of Ram Temple in Ayodhya may be taken within a week,” he said when asked why the temple construction has been put in abeyance despite a powerful BJP-led government at the centre.

“Decision can be taken within one hour, after calling special session of the Parliament,” he stated adding the process does not require even a week.

“The government should do everything for protecting Hindus living in different countries like Australia, America, Pakistan, Bangladesh, Saudi Arabia etc,” he demanded when asked about steps the government should take to ensure security of Hindus abroad especially in the US.

Togadia demanded withdrawal of advisory issued against cow protectors due to alleged increase in cow slaughter.

He said the order terming ‘Gaurakshaks’ as “vigilantes” is absolutely wrong since they only protect cows from slaughter.

“In fact the culprits are ‘Kasai’ (butchers) since they enter into cow slaughtering,” he said adding butchers are the ones who deserve punishment.

“The order of the government is absolutely wrong as such orders had never been given in the past,” Togadia commented.

“Pakistan should be given a befitting reply with guns and tanks,” he said when asked for his reaction on the statement of Pakistan President Mamnoon Hussain who had said “Bharat Kashmir se hate varna honge barbadi ke haalaat (India should withdraw from Kashmir otherwise it would spell disaster)”.