In Thiruvananthapuram, RSS volunteer hacked to death by CPM goons; Hartal on Sunday. 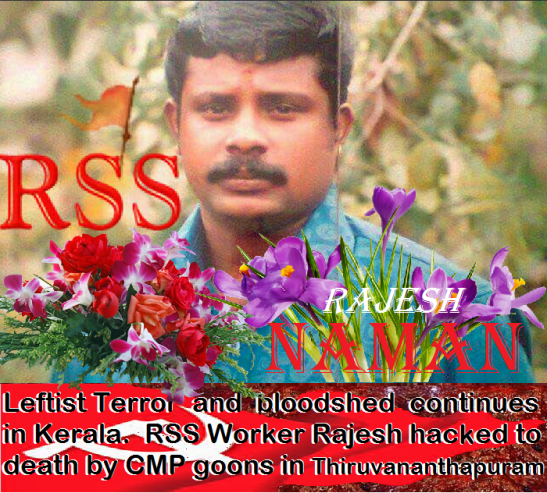 RSS activist Rajesh hacked to death in Thiruvananthapuram, after receiving 40 hack wounds on his face and  limbs, palm chopped off; hartal in Kerala on Sunday.

Jaya Nambeesan | HENB | Thiruvananthapuram | July 29, 2017:: An RSS activist was hacked to death at Sreekaryam near here Saturday night, escalating the tension tension that had engulfed the city following recent clashes between activists of the CPM and the Sangha Parivar.

RSS ‘Sreekaryam Basti karyavahak’ Rajesh succumbed to injuries at a hospital after sustaining several injuries to his limbs, including having his arm chopped off at Edavacode near Sreekaryam.

Rajesh was returning from a ‘shakha’ (daily meeting of RSS) when around 15 men attacked him with swords and sharp weapons. Though other RSS workers tried to counter the attack, they were outnumbered.  Rajesh received around 40 hack wounds, mostly on his limbs. There are also reports that the chopped palm was thrown in a nearby field. 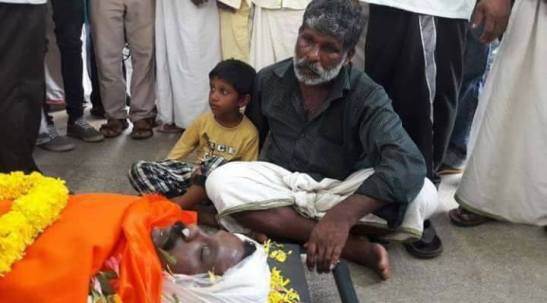 Rajesh Martyred. A father lost his son and a son lost his father .

Rajesh was rushed to the Medical College Hospital and later shifted to a private hospital for emergency surgery but soon succumbed to his injuries.

BJP state president Kummanam Rajashekaran, who rushed to the hospital, accused the CPM of orchestrating the attack. “It is a brutal murder. This is annihilation politics aimed at wiping off RSS and BJP,” Kummanam said.

He urged people to join in the protest against the attack and cooperate with the party’s state-wide dawn-to-dusk hartal on Sunday.

Kummanam said the party would take up the matter with the Prime Minister, Home Minister and the National Human Rights Commission.

BJP district president S Suresh said a group of CPM and CITU workers were behind the attack and demanded that they be brought to book. He also urged CPM to desist from moves to turn the district into a killing field.

Meanwhile, the CPM has distanced itself from the incident. “CPM has no connection with the attack on the RSS activist at Edavacode,” party district secretary Aanavoor Nagappan said in a statement.

Police have started investigating the case and search is on to trace the absconding criminals.

A local goon called Manikandan is said to be the prime suspect in the case.

City police commissioner Sparjan Kumar said, “Police are on the lookout for the attackers. Security has been beefed up across the city to prevent such untoward incidents from recurring.”

2 comments on “In Thiruvananthapuram, RSS volunteer hacked to death by CPM goons; Hartal on Sunday.”

This entry was posted on July 30, 2017 by hinduexistence in Anti-Hindu, Attack on Hindus in India, Attack upon Hindus, Attack upon Hindus by Marxists, Breaking India by Communists, Communist Terrorism in Kerala, Conspiracy against Hindus, Hindu Murder, Hindu Persecution in Kerala, Persecuted Hindus, Save Hindus in Kerala and tagged Attack on RSS-BJP by CPIM, Kerala Bandh (30.07.2017) by Sangha Parivar, Kummanam Rajashekaran, Left Terrorism in Kerala, Rajesh Edavakode Murder by CPIM, Sreekaryam, THIRUVANANTHAPURAM.