India will be successful as Hindu Bharat. 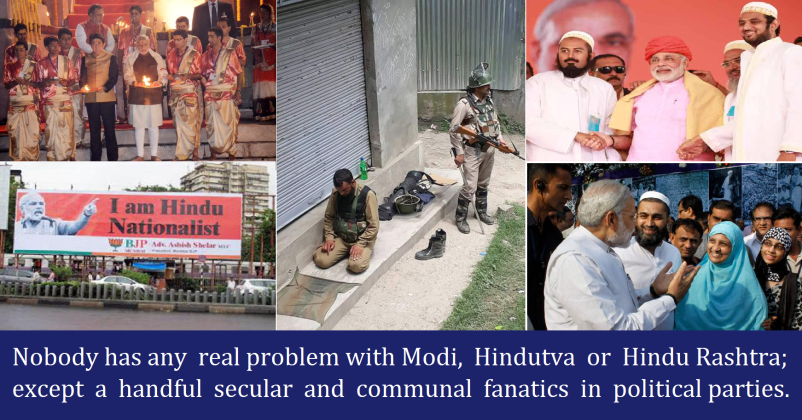 The threat of Islamic State in India…

Why India will ever be a successful as Hindu Rashtra.

The two major providers of the nation’s stability are democracy and religious freedom, only ensured in Hindutva.

Upananda Brahmachari  | HENB | New Delhi | Aug 2, 2017:: A few weeks after Narendra Modi’s election as the prime minister of India in 2014, RSS chief Mohan Bhagwat had proclaimed India as a Hindu nation saying “the cultural identity of all Indians is Hindutva”.

It is no secret that the RSS since its inception in 1925 has been working to declare India as a Hindu Rashtra. But, the 2014 General Elections results added extra impetus to this plan.

Narendra Modi declared himself as a “Hindu nationalist” while promoting his candidature for the most powerful position of the country. Even the chief minister of UP, Yogi Adityanath, has openly endorsed the idea of India becoming a Hindu Rashtra. Encouraged by these utterances, 150 right-wing Hindu groups came together in June 2017 in Goa to plan to convert India into a Hindu Rashtra.

As everyone knows Narendra Modi draws his ideological schooling from the RSS, which he had joined at age 21. His education in shakhas has made him to see Indian and Hindu are synonymous and any non-Hindu as not “the other”.

Modi is a Hindutva devotee and his political ideology continues to rekindle the hope of India’s minority groups. Though under his patronage, the Hindutva forces have been regularly redefining India’s secular constitution.

Majorities are now resisting increased attacks on their places of worship. The ruling party is openly and actively promoting “ghar wapsi” programmes and vigilantism against the culpable “love-jihad”. There have been increasing activities against illegal cattle and beef traders, mostly in BJP-ruled state.

Not just protecting  cows, the proper utilization  of cow urine and dung has also reached a meaningful height in the field of agriculture and health sectors. India, if not a declared “Hindu Rashtra” yet, is assuring to become one for all practical purposes.

Edmund Burke, Voltaire and Alexis de Tocqueville had argued in the past about the importance of religion for a well-functioning society of a nation. Similarly, votaries of Hindutva see Hinduism as the necessary glue for keeping the nation together and the society stronger.

At the same time, Hindutva propagators find India’s adherence to principles of secularism since independence as the reason for all societal ills and manifestations of misery and underdevelopment of the country.

The Hindutva propagators openly criticize the culpable insertion of the word ‘Secular’ in the preamble of Indian constitution in the period of Indira’s emergency in 1997 through an amendment after a long gap of 30 yrs after independence.

Is secularism so bad for the health of a country?

It is a very important question to ponder upon since it has global significance and implications. Recent studies have clearly shown that world is presently experiencing an unprecedented wave of secularisation, while religion is in decline, but the radical Islam is growing enormously. There are more secular societies in the world now than the religious ones. Even in Asian countries such as Japan, religion is declining; in Japan while 80 per cent population consider themselves secular, in China the number is higher than 50 per cent. And such secular societies are facing the threat of Radical Islam.

The increasing secularisation of societies is not strengthening the societies or glorifying the nations. Rather, many studies have convincingly shown that most social problems correlate more strongly to secular population than the value based religious population, except who gets Islamic teaching.

Moreover, secular societies not only experience less population growth, as studies have found out secular children are also weaker compared with those from Islamic households as their secular belief is a negative influence to understand the Pan Islamic threat. The less populated secular countries are now being captured by the Islamic population in the shape of refugees,domestic help  or working groups.

As a report by the Organization for Economic Cooperation and Development (OECD) in 2014 shows the top five countries with the highest quality of life in the world are the secular countries, Australia, Norway, Canada, Sweden and United States. But, all these countries are under severe Islamic threat for their inclination to Secularism and ignorance about Radical Islam.

If you compare within the United States, ultra-religious states such as Mississippi, Arkansas and Alabama are in the bottom of the quality of life index while secular states like New Hampshire, Minnesota and Vermont are on the top. But, you can never declare all of these states are free from Islamic threat, which can only be ensured in the unity of ‘infidels’ or ‘Kafir’, if they frame their society on strong non-Muslim religious faith even in a secular contour.

It is absolutely wrong to presume that a secular nation saves us. On the contrary, it has a worst possibility of being safe and secured in 21st century, when Radical Islam is looming large world wide.

While all evidence show that a society is more likely to be weaker, and a state is more likely to be vulnerable by being secular rather than being religious, in India, Hindutva forces are rightly forcing India to discard its pseudo-secular character, they also want to urge this multi-religious country to subscribe to main stream Hindutva which is the liberal and eternal way of life in India.

The religious zeal of the RSS and the BJP to convert India to a Hindu nation is not only ensuring India away from the threat of Islamic State, it reiterates a developed and successful India as adopted in recent decades, it is fortunately pushing the country into a strong Hindu Nationalism.

A Hindutva based India not only will make the leader of the country the chosen favourite of Hindu ideologies ensuring country’s dedicated democracy, it will also strengthen the freedom of religion of more than 20 per cent of country’s minority population from serious threat of shariah, burqa, jihad and fatwa. The aspiration of the Hindu proliferation will not remain limited to Muslims only, it will benefit the Christians and other minorities to become an inseparable part of the Hindu nation. History has shown withdrawal of Hinduness of any part of the country  will lead to another partition of the country.

For a highly segmented country like India, the two major providers of the nation’s stability are democracy and religious freedom. The very notion of “Hindu Rashtra” is identical to these key two pillars of sustaining Indian nationhood, as Hindutva is really based on the principle of Unity in diversity.

Though Barack Obama has very rightly opined, “nations that do not uphold these rights sow the bitter seeds of instability and violence and extremism”, but he completely failed to understand the truth of Hindutva in which a plural society have been living and multiplying in India due to its Hinduness of the majority people. They embraced all and never shunned anybody if not grossly attacked.

A strengthened Hindu India will not only push the Kashmir conflict to an end, Punjab and the northeastern states are also obviously to witness a strong resistance against separatist insurgencies.

Not only internal peace and stability, a Hindu India will also rise country’s ability to protect itself from external threats mainly from Pakistan and China. India’s military is one of the most united and secular institutions in the country. Large number of minorities have served and are serving in secular India’s armed forces admirably. They all say Jai Hind as their greetings and they have no problem to agree Hindutva as a national way of life keeping their religious practices intact.

It will be wise to expect similar commitment and sacrifice from them for the territorial integrity of a “Hindu Rashtra”. Not only in hard power, the conversion from secularism to Hindutva will give dividend to  India its hard-earned soft-power among the community of nations as well. Otherwise, the psuedo-secular politics of India will pave the country for another partition or Pakistan. The common minorities in India are joining Hindutva parties like BJP and Shiv Sena in large numbers. Hindutva has never been a problem for the common Muslims, Christians or Dalits. But, the problem has been created by a handful fanatic Muslim, Christian, Dalit and pseudo-secular leaders for their vested political interest.

The Hindutva organisations and parties’ design of “Hindu Rashtra” is very likely to spiral out of control and threaten the actual communal fabric of the country. The actual transition of secular India to Hindu India remains faithful with high certainty and potential prosperity to the unity  and integrity of the country.

There is two options for India. Liberal Hindu India which is secular in nature or any Islamic State like Pakistan or any Islamic country those have no democracy in reality. freedom of minority,  liberty and humanity.

India needs to recognise this threat soon to survive.

Note: This is a rebuttal of  an article published in Daily O dt. 02.08.17 as “Why India will never be a successful Hindu Rashtra“+.In this article the writer, Shri. Ashok Swain, a professor of Peace and Conflict Research at Uppsala University, Sweden tried to defame Hindutva and Hindu Rashtra perspective for upholding his pseudo-secular views.

Keeping Swain’s article as my base of writing, I have made an addition and alteration of 400 words to spell out my views in favour of Hindu Rashtra. The blue marks are the changes.

Prof. Swain has no idea why Secular is an absurd and obliterated word in Hindutva and Nationalist mind in Indian context. Viewers may get help on this topic if consult with my writing, “Why Hindu Rashtra is absolutely urgent in Bharat“+.

4 comments on “India will be successful as Hindu Bharat.”