This is the consequence of Political Islam… 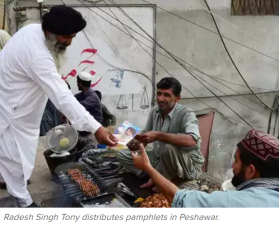 In this July 11, 2018, photo, Radesh Singh, left, is one of about 200,000 Sikhs living in Pakistan, talks to local people in his constituency in Peshawar, Pakistan. Despite attacks on his fellow Sikhs by radicals and even by Islamic State insurgents, he is running in elections as an independent.

Kathy Gannon | AP | Islamabad | July 23, 2018:: As Pakistan heads into parliamentary elections this week, the country’s minorities are looking for better representation and a voice that will speak up for them in what rights groups warn is in an increasingly intolerant atmosphere in this Muslim-majority nation.

It’s an uphill struggle for Pakistani Christians, Sikhs, Ahmadis and others. Minority religions make up just 4 percent of Pakistan’s 200 million people; Shiites account for about 15 to 20 percent of the Muslim population.

The country’s complicated electoral system allots minorities and women a small number of “reserved” seats, based on their parties’ gains at the polls.

But for the rest of the seats — both in the 342-seat National Assembly, the law-making lower house of parliament, and the four provincial legislatures — members of minority groups are increasingly choosing to run as independent candidates, without affiliation to any political party.

The minorities’ major concern ahead of Wednesday’s vote has been the plethora of radical religious and sectarian groups that have resurrected themselves under new names and fielded candidates for the polls — including Sunni extremists who promise to rid Pakistan of Shiite Muslims.

Other radical parties have campaigned on promises to enforce Pakistan’s controversial law on blasphemy, which carries the death penalty and which has allowed for the prosecution of anyone deemed to offend Islam. Frenzied mobs have killed at the mere suggestion that an act of blasphemy was committed.

He is urging the government to “make sufficient effort to ensure minorities can cast their votes.”

Garbage is piled by the roadside and cinderblock homes have flimsy curtains instead of doors in Rimshah, a squatters’ settlement on the outskirts of Islamabad.

Years ago, scores of Christian families settled here when a mob of Muslim men, enraged over an alleged act of blasphemy by an 11-year-old Christian girl, tried to kill her and drove them out of their homes.

They named the slum Rimshah, for the 11-year-old girl with Down’s syndrome who was eventually cleared of charges of tearing up pages of an Islamic religious book.

Michael Rose, an outspoken advocate of the Christian community, which numbers about 3 million in Pakistan, campaigns in Rimshah for Asif Shahzada, an independent Christian candidate.

Rose says that independent minority candidates are the best hope of getting Christian grievances heard. Minority representatives chosen on the “reserved” seat system tow the party line and rarely raise their community’s legitimate concerns, he says.

“I jumped into this race only for my community,” says Shahzada, looking around the slum. “We have so many problems, no education, no health care, no jobs. We don’t even have enough water.”water.”

Radesh Singh is one of about 200,000 Sikhs living in Pakistan, mostly in the conservative Khyber Pakhtunkhwa province along the border with Afghanistan. The Sikhs are easily identifiable because of their tightly wound and often colorful turbans, and because they share the surname Singh.

Singh said attacks by the Taliban and lately also the Islamic State group have forced thousands to leave the province, including his son. The radicals, Singh says, are killing both fellow Muslims and members of minority groups.

He is campaigning as an independent candidate in Peshawar, the provincial capital, and refuses to leave.

“I wanted to show that a poor man can fight, run his own campaign and compete against these rich candidates … who take the poor people’s votes but then give them nothing in return,” said Singh.

On a street lined with small shops in his neighborhood, he stops at each store, run by his Muslim neighbors, and is greeted with a smile. An elderly neighbor, Allah Mir, gave Singh a gentle hug, shook his hand and promised him his vote.

“I don’t care about his religion,” Mir said. “I care only that he is a good man.”

Hindus make up Pakistan’s second-largest minority, with more than 2 million, living mainly in southern Sindh province where they are among the poorest.

Many live as indentured slaves on the estates of some of Pakistan’s largest landowners, working on the farms.

The Hindus also suffer widespread discrimination because of the decades-old rivalry between Pakistan and neighboring India, a majority Hindu nation.

Whenever relations between the two countries deteriorate, the treatment of Pakistani Hindus gets worse. Rights activist also routinely raise concerns about forced conversions of Hindu girls to Islam.

Veeru Kohli was born a slave but fled bondage, walking for three days until she found offices of the Human Rights Commission of Pakistan to help her. She then returned to the landowner to recover her children and free eight other families.

Kohli is now running as an independent candidate.

If she wins, she will become the second Hindu woman in parliament in Pakistan. In March, Krishna Kumari, a member of Pakistan People’s Party, was elected to the 104-seat Senate, the upper house of parliament — becoming the first Hindu woman elected, albeit in a vote by parliament members and not a popular election.

Though Muslim, Pakistan’s Shiites have suffered enormous losses, with hundreds slaughtered at the hands of radical Sunni Muslims who consider Shiites heretics and believe it is their religious duty to kill them.

However, unlike other minorities, Shiites in Pakistan are not allocated any special seats in parliament and can run either on their party’s ticket or as independents.

Ahmadis revere the 19th century founder of their Muslim sect, Mirza Ghulam Ahmad, as a messiah, challenging the basic tenet of Islam that Mohammad is the final prophet.

Since Pakistan declared them non-Muslims in 1974, their numbers are difficult to gauge; they are believed to number several hundred thousand. Hundreds have been killed by zealots and their places of worship have been targeted; thousands more have fled Pakistan.

Saleem Uddin, a spokesman for the community, says Ahmadis plan to boycott Wednesday’s elections after being put on a separate list of registered voters.

“It means we are not the same as other Pakistanis,” said Uddin. “Why?”