Three jihadis booked for murdering VHP leader and Gorakshak at Mahuva in Gujarat.

In the Good Governance of BJP in Gujarat, Goraksha Worker (Cow vigilante) attached to VHP brutally murdered by three Jihadis! 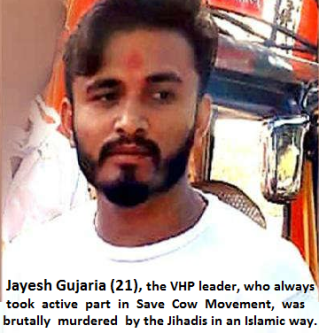 A State Reserve Police (SRP) company and additional police staff were deployed in Gandhi Chowk, Kuberbag and Meghdoot localities where mobs went on a rampage, vandalizing roadside eateries and shops.

Police said the deceased Jayesh Gujaria (22) who was recently appointed as the president of Mahuva taluka VHP. Jayesh has been working in the field of Goraksha for years and was a challenger before the illegal beef sellers and suspected cow smugglers.

Jayesh and his friend Mahesh Majithia (23), were attacked by the accused, identified as Bapudi, Aslam, Imran and their unidentified associate with knives and iron pipes. Police investigation has revealed that during the recently held Navratri festival, Gujaria and Bapudi had an altercation over the issue of putting up VHP hoardings. Both of them hurled abuses at each other and issued threats. Nursing a grudge against Gujaria, Bapudi and his aides attacked him. 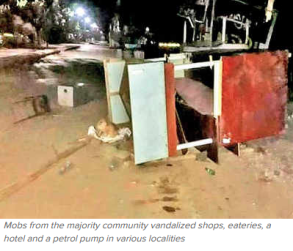 “The victims were sitting in Gandhi Chowk, when the accused arrived at the spot on two bikes. Straight away, they launched an attack, clubbing and stabbing Gujaria. When Majithia intervened, he too was attacked. Gujaria died in a private hospital in Bhavnagar,” said police.

Media and pseudo-secularists generally start crying when illegal beef sellers and suspected cow smugglers are killed by mob, but these same people don’t even write a single line about murder of Gorakshaks by jihadis !

The role of BJP Govt in Gujarat is also unclear in regard to protect the cow vigilantes who want to Save Cow progeny in a legal way.

As a repercussion of murder of Jayesh, mobs from the majority Hindu community vandalized some shops, eateries, a hotel and a petrol pump in various places in adjacent localities.

Police says that the situation is under control.

2 comments on “Three jihadis booked for murdering VHP leader and Gorakshak at Mahuva in Gujarat.”