Why Administration and Police are taking no action against Christian Missionaries in South Bengal?

Now, Christian Missionaries are targeting Hindu gatherings in Hindu Ashrams, Temples for conversion. They are allegedly using trafficked girls for preaching of Jesus and Bible.

Susmita Bhattacharia | HENB | Diamond Harbour | Feb 2, 2019:: Again, Diamond Harbor, a sub-divisional town in WB’s South 24 District, has seen a heaviest situation for vilification of Hindutva, slandering Hindu Gods and Goddesses the name of Jesus and for conversion ploy through the Biblical preaching in a very objectionable way.

On 30/01/2019 (Wednesday),  some outsiders being Jesus and Bible preachers  arrived at the school premises of Bharat Sevashram Sangha, Pranav Vidyapith. There was a sports competition going in the school play ground in the morning. A lot of crowds was present there. Many students of Pranav Vidyapith and their parents were also participating and involved in the same sporting event.

Finding the opportunity, the Jesus and the Bible missionaries started preaching about Christianity in the crowd. In the context of preaching the greatness of  Jesus and the Bible, the missionaries started condemnation of Hinduism  and started tempting to take refuge in Jesus. They also claimed that  the Gods and Goddesses of Hindu religion were all evil spirits and acceptance of them would be the only reason for all Hindu distress. The culpable Bible preachers also claimed  that India would be the kingdom of Jesus very soon and that is the only way to India’s liberation in all respect.

When the Hindu people objected for such demeaning Bible preaching against Sanatan Hindu Dharma and obstructed the distribution of Bible and other evangelic literature, the Jesus and the Bible Preachers threatened the public in order to lodge complaint against them in local police station for disputing their preaching. As a matter of fact, the Ashramites and the inmates of BSS were also present in the scene and they were also protesting the vilification of Hindu Dharma by the Christian missionaries. The Christian missionaries also threatened the monks and disciples of BSS to see them when the Bharat Sevashram Sangha’s saints would be preaching outside. The situation became volatile within the fractions of time.

Upon a call from Brahmachari Basudev Maharaj of Bharat Sevashram Sangha, Diamond Harbour Branch, the prominent Hindu organizer and a former student of Pranav Vidyapith, Upananda Brahmachari and Advocate Prasad Ray of Hindu Jagaran Manch and their associates reached the spot immediately.

Upon interrogation, it was known that three lady Jesuit-Bible preachers Babita Bodo (17 yrs) and Simi Tenzing (16 yrs) from Assam and Bindar Kaur (23 yrs) of Punjab and the male group leader H Eriuchi (72 yrs) of Nepal created such situation of turmoil. The Christian preachers were speaking in Bengali well and they were associated with the Dudhnoi Baptist Church, the Dalang Baptist Church and the Bible Society. They were also inspired and connected with ‘Harvest TV’ (Kerala), ‘Punjabi Christian Gold’ Channels and other missionary organizations of Eastern, Western and North-East India.

It was also revealed on interrogation such team of Christian missionaries  always tried to attend Hindu gathering, mela etc. attached to different Hindu Ashrams, temples and pilgrimages to spread their conversion network. 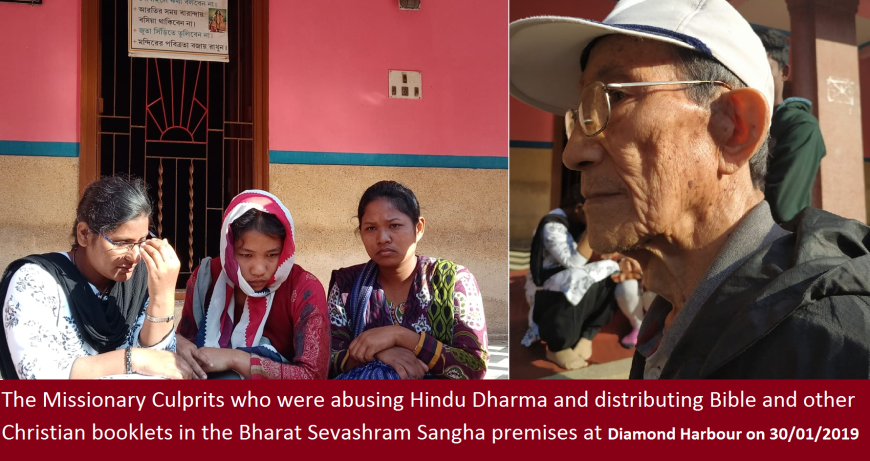 In this situation, the sadhus of Bharat Sevashram Sangha informed the Diamond Harbor police station and the police reached the ashram and took the missionaries to local police station.

When Basudev Maharaj of Bharat Sevashram Sangha and other Sangha sympathizers wanted to lodge a complaint on behalf of the ashram, the police authorities began to delay and said that if a missionary wanted to complain against the saints and the Hindu protesters with a charge of molestation, it would also have to be taken. Advocate Debangshu Pandey, a former student of Pranav Vidyapith and prominent lawyer who was there  in the police station, said that any false allegations against the saints would create a big public unrest. After this, the Police officer on duty took the written statement/appeal of both the parties without giving any case against the culpable/accused missionaries. The Second Officer of Diamond Harbour Police Station warned the Christian Missionaries not to preach Jesus and the Bible before any Hindu institution and school. But, the respective officer of Police Station undermined the most important thing and did not registered any case against the Christian Missionaries as they deployed minor girls from far states for conversion work keeping them captive. The ignored matter may hint Christian Missionary Conversion Network with deployment of trafficked Hindu girls very illegally.

Missionary affidavit in plain paper: Not to preach Bible in any BSS Ashram Center and Complaint given to DH Police Station.

In a report published recently in this Hindu news-views portal it was highlighted about the “Critical Christian aggression in the Hindu areas in South Bengal“. But, the negligent respective authorities  in Administrative and Police Departments are not ready to draw any case against the culpable Christian Missionaries under appropriate rules and section of law in force such as,  The Religious Institutions (Prevention of Misuse) Act, 1988+,  IPC Sec. – 441,  IPC Sec.- 295,  IPC Sec.- 295A,  IPC Sec.- 153A,   IPC Sec.- 124A and guidelines of The Trafficking of Persons (Prevention, Protection and Rehabilitation) Bill, 2018 and the relevant section of JJ Act 2015 and ITPA 1956.

In such an unbearable situation, the Hindu people are quiet frustrated with the General Administration, Police and Political Parties who are grossly helping the unabated Christian missionary and conversion with their ‘silent consent’. Christian missionary and conversion network have been working in south Bengal for converting many innocent Hindus by luring them good opportunities in education, employment, health, adoption and love (read sexual pleasure) all in the name of Jesus. An all these mischievous activism and abusing Hindu religion for the promotion of Church and Christianity to transform India as a ‘Kingdom of Jesus’ are being conducted under the nose of police & administration without any restrain.

Upananda Brahmachari, the prominent Hindu interlocutor and Ed. of http://www.hinduexistence.org urged all the Hindus to unite and retaliate against Christian perpetration. He also appealed the Hindus to raise their voice against foreign conspiracy, political opposition and administration & police indulgence to increase the awareness level and Dharma Siksha of Hindus to save the traditional Sanatan Dharma & Culture.

We’re a non-profit body creating awareness against Christian Conversion & rescue the Hindu victims. Make a donation and help our cause.

One comment on “Christian Missionaries try to set Hindu gatherings in Hindu Ashrams, Temples for proselytizing.”