The Hindu-Sikh Minorities are in the border of extinction in Islamic Pakistan.

Upender Singh Bedi | HENB | Karachi | Feb 6, 2019:: Pak Prime Minister Imran Khan on Tuesday (05/02/2019) night ordered a probe and urged the provincial government in Sindh to take action after a Hindu temple in Khairpur was attacked and scriptures holy to Hinduism were set on fire.

Muslim miscreants in Pakistan attacked a temple, vandalised idols, and set ablaze Hindu and Sikh religious scriptures on Sunday (03/02/2019). The act has triggered sharp criticism from both the Hindu-Sikh minority communities of Pakistan.

The temple is located in Kumb, about 30 kilometres from Khairpur, in Kot Diji taluka of Khairpur district in Sindh province of Pakistan. The temple is surrounded by as many as five dozen houses of Hindus.

Following the incident, the Hindu and Sikh residents of Kumb and nearby cities staged protests, demanding immediate arrest of the Jihadi culprits.

The temple priest Vijay Kumar had lodged a complaint with police. He added that police had registered an FIR and arrested three suspects.

Seeing the growing protests from the Minority communities, Pak PM Khan ordered a probe and tweeted. “The government of Sindh must take swift and decisive action against the perpetrators. This is against the teachings of the Quran.”

But, Imran Khan was attacked by International Hindu interlocutor and Hindu Existence Editor Upananda Brahmachari for the serial attacks on the Non-Muslim people in Pakistan as indoctrinated by Quran and the fanatic Muslims. 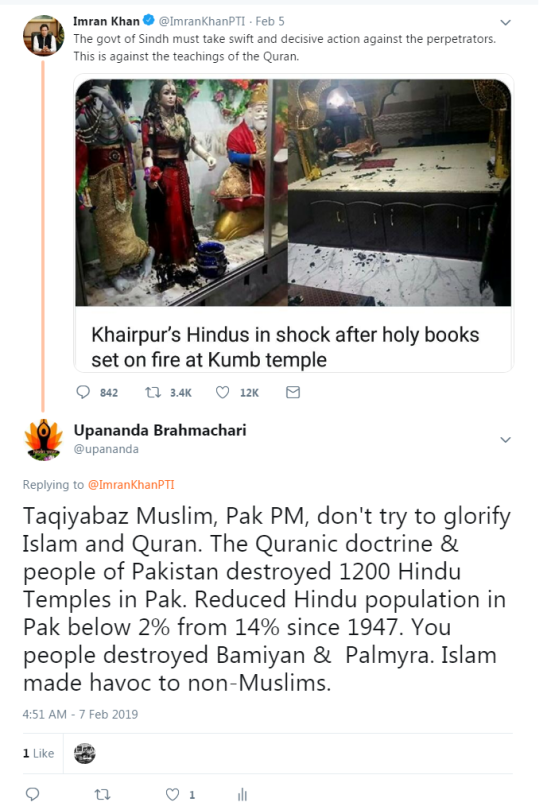 The governor expressed concern over the attack on the temple in Kumb and said that culprits of this heinous crime will soon be apprehended.

He further added that such incidents are a conspiracy to sabotage religious tolerance and peace in the province.

Such claim of Sindh Governor Imran Ismail for religious tolerance in Pakistan has  created a great laughter among the horses of Pak Regiments.

The holy books both were kept in Sindhi and Gurmukhi languages. “The vandals set the blanket which was covering the Sikh scripture to fire which spread and caused other damage too,” Arora said.

Arora said police had arrested three persons and a team of forensic experts lifted fingerprints from the scene of crime. “The persons who had attacked the temple had earlier also threatened the shrine management but they never reported it,” he said, adding that a police guard had been deployed at the temple to restore the confidence of minority communities.

But, a matter of astonishment, no pro-Pakistani Sikh militant groups mainly the Khalistanis  in Canada or UK did not made any protest so far for the Sacrilege Of Guru Granth Sahib Ji in Pakistan!

2 comments on “Pak PM Imran orders probe into attack on Khairpur Hindu temple and Sacrilege of Gita and Granth Sahib.”