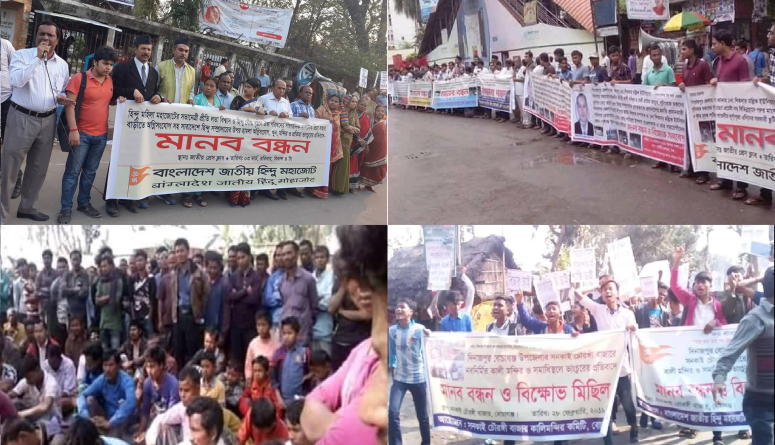 The Human Chain was formed in a protest against recent attacks and arson on the houses of  Priyabala Saha, the Organising Secretary of Bangladesh Hindu Bouddha Christian Oikya Parishad; BD Liberation War Hero Jagadish Biswas and the President of Bangladesh National Hindu Grand  Alliance, Smt. Pritilata Biswas including hundreds of cases of torture. rape, arson, killing, destruction of temples of minority Hindus in Bangladesh even in the Awami League ruling under PM Sheikh Hasina Wazed.

In the press release, the Bangladesh Jatiyo Hindu Mahajot categorically expressed its severe disappointment over the callousness of the present Awami League Govt and the  unpredictable attitude of BD PM Sheikh Hasina to give the protection of the minority Hindu-Buddhist-Christian-Tribal people under the onslaught of Jihadi perpetrators.

The press release describes the highest plight of Hindus of Bangladesh comprising Jihadi atrocities on minorities on regular basis in the shape of unbearable torture, murder, attempt to murder, eviction, encroachment of lands, arson, loot, abduction, forced conversion, rape and extreme eventualities. The protestors claimed 200 such cases in last two months in Bochaganj of Dinajpur, Brahmanbaria, Coxbazar, Maimansingha, Jhalakathi, Chandnpr and other places throughout Islamic Bangladesh.

No Govt in Bangladesh or India cares for the protection and prospect of harassed, tortured, evicted Hindu Minorities there. The Hindu Grand Alliance in Bangladesh demanded a step down of present ruling party Awami League and its PM Sheikh Hasina for their failure to give safe guard to the minority Hindus and other minority victims in the country. The alliance have expressed their grievance for not taking stringent action against Jihadi perpetrators under proper law enforcement. The alliance have categorically mentioned the cause of such attacks on Bangladeshi Hindu minorities for lack of proper representation of Minorities in the Jatiyo Sansad (parliament) of the country.

Bangladesh National Hindu Grand  Alliance also made such programmes in different places frequently in the last few months this year like previous years.