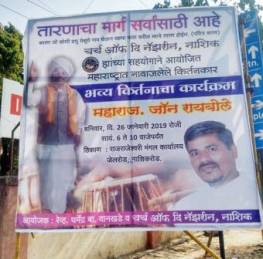 Reports came in Dainik Sanatan Prabhat and HJS website that such a kirtan was held on 26th January this year in Pune under the arrangements of ‘Church of the Nazarin’ in a Kirtan fete performed by one so-called Maharaj John Raybole.

It is not clear that how many such Hindu camouflages have been made by Church of the Nazarin or other Christian organisations and Churches  for setting a goal to covert Hindus into Christianity.

In January 2015, a profound Hindu Nationalist and eminent journalist in the south, B R Haran contributed an article in this website titled as “Christian missionaries target every single component of Hindu society+,” where he exposed how Christian missionaries were hatching their conversion conspiracies taking the Hindu names of rituals and ideas to dupe the Hindu men and women.

It is very dangerous that the Christian missionaries are using every components of Hindu rituals and ideas to attract the Hindu people casting similarities as Hindu custom and tradition to infuse the stigma of Jesus and Bible in order to take them away from the Hindu fold.

These culpable Christian conversion rouges even publish Hindu scriptures like ‘Isavasya Upanishad’,  ‘Jishu Veda’ or ‘Khrista Puran’; spread Christianity from ‘Jishu Dhyan Mandir or ‘Jesus Yog Ashram’; the fraud Christian rouges observe Christian Pongal or they preach Christianity in Jesus ‘Mandali’ dressing as Hindu ‘Sant’ wearing saffron robes and Cross necklace both. Not only that these Christian frauds have started Jishu ‘Bhajan Mandali’ throughout India and even they have started Jishu ‘Deeksha’ (initiation) and ‘Sadhana’ in a very clandestine manner.

The Christian Missionaries are faking every Hindu Religious Components to spread the ideals of Jesus and idea of Bible initially invoking some similarities of it with Hindu Dharma. Surfacing those Hindu similarities, the Evangelist frauds attract the ignorant and simple Hindu people in a mission of converting them in Christianity and ultimately make all of them anti-Hindu by infusing venomous preaching against core of Hindu tenets.

Hindus in India are in a cross road of Christian conversion as they have already captured three states in North East as in Nagaland (90% Christian population), Mizoram (90%) and Meghalaya (83.3%) and reached good  majority in Manipur (41.3%) and Arunachal Pradesh (30.3%). The Conversion drives of the Churches have made significant demographical changes in Goa at with 25% Christian population, Kerala at 18.4% and Tamil Nadu at 6.2%.

Getting help of Hindu imitations, the Christian Missionaries have expedited their conversion work in India in a new thrust. This must be stopped by the devout Hindu organisations and Dharmik bodies immediately.

Unless, the apex Hindu bodies and devout Hindu organisations do not prevent the Christian Missionaries from using Hindu religious terminologies like Puja, Yajna, Havan, Kirtan, Mantra, Dhyan, Yoga, Sadhana, Sanskar,  Deeksha, Prasad,  Bibhuti, Gairik, Sadhu, Maharaj, Ashram, Mandir, Bhajan, Upanishad, Dharma Pushtak etc. and do not take the copy rights of those terms from preventing misuse those by anti-Hindu elements, that will draw far dangerous consequences than anything outrightly.

The devout lawyers in Hind Vidhidnya Parishad+, Dharmabhimanis in Hindu Janajagruti Samiti+ and Sanatan Sanstha+, the Devotees of HH Shankaracharya Swami Swaroopananda Saraswati of Dwarika  Sharda Peeth+ and HH Swami Nischalananda Saraswati of Puri Govardhan Peeth+ must take legal and social action to stop Christian module of faking Hindu terminologies for Christian conversion. This article must be translated in all possible languages to make a wide awareness for this burning issue.

All the Hindu bodies and individual Hindus must write to President of India and all the state Governors to attract their attentions referring this article or otherwise for this very important Hindu issue immediately. Hindu Existence Forum will also do so.

As Hindu Janjagrti Samati, Sanatan Santha and all the revered Shankaracharyas are in the Prayag Raj Mahakumbha Parv at present, they must take appropriate resolution on the very important Hindu issue without fail. The Holy Confluence of Mother Ganga, Mother Yamuna, Mother Saraswati and Lete Huye Mahavirji will bless them for this great work to protect Hindu Dharma from the Christian menace obviously.