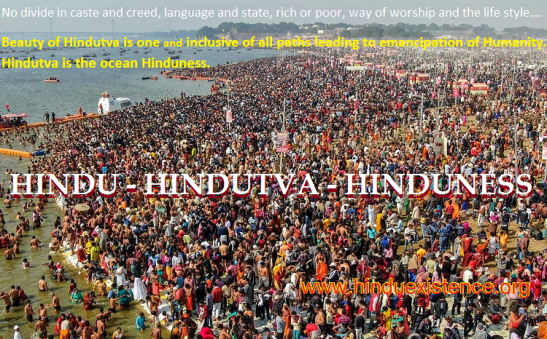 The Inclusiveness of Hindutva.

The Hindutva is all inclusive, all assimilating and all absorbing. It is more dynamic, progressive and tolerant. Hindutva is more vibrant and is not exclusivist like other religions and isms and therefore is liked by the majority of the countrymen. It is the essence of Hindusim and hence  Bhartiyata and as such shines like a shining star in the sky. It is neither irreligious nor anti religious but neutral in religious matters. Hindutva is not communal but is very tolerant and assimilating and those who oppose this progressive ism are making blind opposition and their opposition stands nowhere. Hindutva , Hindutawadi and Bhartyita are more or less synonymous terms and are not contradictory and should be seen without any prejudice and bias. In fact it stands for the vibrant culture and heritage from the times immemorial and to be more specific it can be said to be the cultural legacy which dates back to 5000 years and this culture is ever green and could no be mutilated even by the invasions of the foreign invaders and it stands tall among the great cultures  of the world and it could not be destroyed by the foreign invaders as it is without beginning and without end and it flows on like a river and it is ever restless and rustles. The blind criticism and opposition to the Hindutva pales into insignificance and gets rebutted by the very thought of Hindutva . Hindutva signifies Bhartiyata and can appropriately be called cultural nationalism and therefore should not be considered anti religious. Hindutva is the essence of the Bharat and Hindustan and can be said to be the dito copy of Ganga –Jammni tehseeb and not against the concept of mutual brotherhood and harmony.

Hindutva is more secular than the secularism and that was the reason that the founding fathers of the constitution did not saw the need of keeping the word secularism in the original un-amended Constitution. It should be noted that the philosophy of Hindutva is more tolerant as it is inclusive and all absorbing. The unity in diversity is the hallmark of the Hindutva and Hinduness and the Hindu sees unity in diversity as the most valued principle and works in the direction of keeping it foremost in view while living and working and it is the bedrock of the governance as well. Hindutva is nationalistic and patriotic in nature and it giver precedence and priority and preference to the nation and not to the religion and for Hindutva country is the first priority and religion is secondary and therefore Hindutva  can be said to be the cultural legacy of this great nation called Bharat. It should be recognised that even after the foreign onslaught many times the Hindutva and the nation came victorious at the end and this has forced the poet Iqbal to say that there is some greatness in the Hindu culture that the Greek  civilization and other civilization stand nowhere today but the Hindu culture is ever fresh and green and flowing a top among the cultures of the world. Hindutva is broad and dynamic and it has the capacity to adjust to the changing circumstances of the time. Hindutva is not narrow but is very broad, dynamic, assimilative and inclusive. Anyway Hindutva is soul of this great nation that is called Bharat and it has the intrinsic strength to stand tall in the world cultures and this is a matter of pride for all Indians.

There is no confrontational divide in caste and creed, language and state, rich or poor, way of worship and the life style, no arm twisting between the different school of philosophies and many sects in Hindu fold. Hindutva is this unfoldment of Virat (magnificent) Hindu.

(The writer is retired Educational Officer and Columnist).

The original article was first appeared in The Northlines.

Opinions are personal to the author.