Start Redressal Forum to Stop Bullying of Twitter & others. Arrest Manish Maheshwari and Ban Twitter in India for a month. 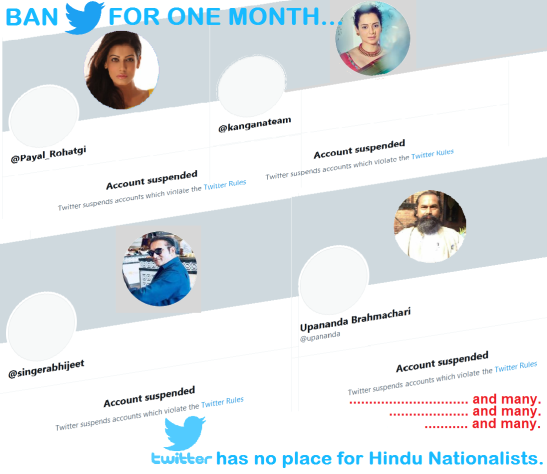 Twitter must be restrained from discrimination on Hindu Nationalists, playing with Indian map and child pornography. Arrest Twitter India head Manish Maheshwari and Ban Twitter in India for a month.

Upendra Bharti | HENB | New Delhi | June 30, 2021:: The social media platform Twitter India thinks that they enjoy the superlative power to remove blue tick mark from the RSS Chief Mohan Bhagwat and Indian Vice President Venkaiah Naidu or to withhold the activities of Indian Union Minister for Law & Justice and Electronics & IT, Ravi Shankar Prasad briefly as they decided to do so. In their sinister design to malign the Hindu Nationalists in India, they have also permanently suspended the twitter handles of many Hindu nationalists like eminent Singer Abhijeet Bhattcharya, Film and TV actresses Payal Rohatgi, Kangna Ranaut, Hindutva Web Editor Upananda Brahmachari and many in a long list.

The web activities in Twitter went so many times subversive, communal and hateful against India and majority Hindus, but Twitter authority could not take proper action to stop those anti-Indian and anti-Hindu trails. However, Twitter always took the side against India and Hindus only to satisfy its associates enticed with Congress, Toolkit, Selective Secular, Tukde Tukde gang, Fake Farmer gang and obviously the Pro-Jihad Ghazwa gang highly active in national and international level.

Now, Uttar Pradesh Police on Tuesday approached the Supreme Court to challenge a Karnataka High Court order that has given Twitter India head Manish Maheshwari temporary protection from arrest in connection with an FIR over tweets about the assault of a Muslim man near Delhi.

Mr Maheshwari has also approached the top court; he filed a caveat asking the court to hear his side before passing any orders on UP Police’s appeal.

Last week the Karnataka High Court said UP Police could not take “coercive action” against Mr Maheshwari – who was first summoned to the state as a witness and later served notice as an accused charged with intent to riot, promoting enmity and criminal conspiracy.

The court also said interestingly, Mr Maheshwari – a Bengaluru resident – did not have to travel to UP now.

UP Police wanted to arrest Twitter India MD Manish Maheshwari on the basis of an FIR made upon a post where a Muslim elderly man was beaten up by six Muslims and Hindus over a selling of Tabeez (amulets) without any communal angel. But, the incident went viral in Twitter handle as a case of attack on Muslim by Hindus as portrayed with a high communal angel. Repeated mentions to twitter to take down those posts went vain until UP police made an intervention.

With all respects to the court of law in Bengaluru, it must be mentioned here that the direction of the Court stood not infallible when a foreign agency like Twitter wanted to mock the law of the land and indulged into a serious law and order situation in a very communal context.

Moreover, UP Police made another FIR against Twitter for publishing an incorrect map of India on the Twitter website; the map showed Jammu and Kashmir, and Ladakh as a separate country. Think what Twitter actually wanted to satisfy India’s antagonists like Pakistan and China!

In the meanwhile, Delhi Police Cyber Cell has registered an FIR under the Protection of Children from Sexual Offences (POCSO) Act and Information Technology (IT) Act against Twitter on the basis of a complaint from National Commission for Protection of Child Rights (NCPCR) over allowing access to ‘highly objectionable’ child sexual abuse material on the platform.

The presence of Twitter or Facebook in Indian domain is like another invasion like the East India Company with a mode of ulterior supremacy. These social media platforms must be taught with a good lesson to restrain.

Concerned Twitter users watched how eminent Singer Abhijeet Bhattcharya was suspended in twitter for his posting against JNU’s Tukde Tukde gangster Shehla Rashid. Though a punch of vulgar, Abheejit reacted against Shehla’s allegation: “From Gujarat to Bengal to Madhya Pradesh, BJP leaders run Sex rackets, Child trafficking gangs & spy for ISI.” Such allegations against majority Hindu leaders by Shehla Rashid amounted with no action by Twitter against their Selective Secular and Pro Kashmiri Separatist Shehla Rashid, but Abhijeet Bhattacharya was suspended by Twitter. Actually, Twitter was finding a scope to ban Abhijeet as he was very critical about the pro-Pakistani gang in Bollywood ranging from Karan Johar to Mahesh Bhatt.

As actress Payal Rohatgi was vocal about the ‘notorious’ Nehru-Gandhi family from Motilal to Rahul and their immense misdeeds and misleading sins for India in their Islamic indoctrination, Twitter expelled Payal for her truthfulness.

Another Bollywood celebrity Kangana Ranaut (four National Film Awards and four Filmfare Awards winner and Padmashri Award Winner) was suspended by ‘autocrat’ Twitter authority as she expressed her grim concern on the Post Poll Violence in West Bengal and condemned the ruling party in Bengal and the perpetrators who tortured raped, murdered innocent people in Bengal. Ranaut was vocal about the Islamic communalism in the post poll violence in Bengal.

Twitter did not spare Upananda Brahmachari, the editor of a popular Hindutva portal (www.hinduexistence.org) as he criticized ‘“Jihadi Islam is 3rd stage Cancer to the Society”. Twitter also suspended Brahmachari as he mentioned the ordeal of the Yazidi people under ISIS attacks.

As a matter of fact hundreds of Hindutva activists and Hindu Nationalists were suspended where as many ‘anti-Hindu’, ‘anti-India’, ‘pro-Pakistani’ are allowed in Twitter by Twitter India without any problem with its ‘selective-secular’, ‘pro-congress’, ‘jihad inclined’, ‘subversive synchronized’ and ‘urban naxal’ motivations.

As the matter is now subjudice, one should not comment much on the judiciary. But, with a full faith on the apex court, the aggrieved victims in Twitter and upset Indians will wait for that point of banning Twitter symbolically for a month along with the moment when Twitter India head Manish Maheshwari will be put in Jail.