Declare Bharat as Hindu Rashtra, there will be 15 others automatically within one year: Puri Shankaracharya. 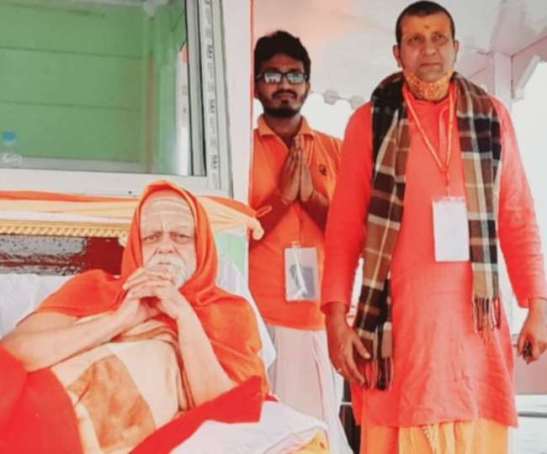 15 nations will take the same step within a year if India declares itself as a Hindu Nation: Puri Shankaracharya Nischalananda Saraswati. 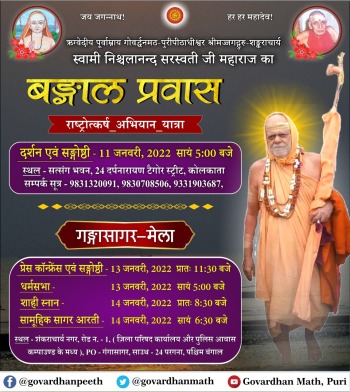 Upendra Bharti | HENB | Gangasagar | January 13, 2022:: Shankaracharya Swami Nischalananda Saraswati of Govardhan Peeth Puri, who has come to take a Shahi Snan (royal bath) in Gangasagar on Makar Sankranti, in a press conference on Thursday, claimed that 15 nations would take the same step within a year if India declared itself as a Hindu Nation.

In a press conference on Thursday, Puri Shankaracharya said- ‘I have had talks with high representatives of 52 countries through video conferencing. In the conversation, representatives of 15 countries including Mauritius, Nepal, Bhutan expressed their desire and said that if India declares itself as a Hindu nation, then taking inspiration from it, they will also take steps towards declaring their nation as a Hindu nation. Expressing displeasure over the demolition of idols of Hindu deities in Bangladesh, Shankaracharya said, “When minorities can live comfortably in India, why can’t Hindus be safe in Bangladesh? Bangladesh is carved out of India itself. The insult of Hindu gods and goddesses cannot be tolerated anywhere in the world.

Shankaracharya said, Nepal is becoming a machine in the hands of China

Shankaracharya said- ‘Nepal has become under the grip of China. It is becoming a tool in China’s hands. Our foreign policy in this regard has proved to be weak. On organizing the Gangasagar fair under the shadow of Corona, Shankaracharya said- ‘Vidhan Sabha elections were held in various states during the period of Corona and are going to be held in future also. When there is a political program, the politicians do not have a vision of Corona, but when religious programs are organized, the matter of Corona starts rising. Shankaracharya said that pilgrimage places should not be converted into tourist places. It is not right to give the form of Bhog Bhoomi (land of lust) to Tapobhoomi (land of penance). Asked whether Prime Minister Narendra Modi should attend the Gangasagar Mela like Kumbh, the Shankaracharya replied, “If the PM wants, he can follow me.”

This year the flow of pilgrims in Gangasagar 2022 is quite less than previous years due to imposed Covid-19 restrictions. Calcutta High Court has set up a two men committee for Covid-related compliance.

“Only doubly vaccinated pilgrims will be allowed in the Mela and RTPCR negative reports done at least before 72 hrs is mandatory,” the court observed.

Many Hindu Akhadas, Social Welfare Organizations and NGOs like Bharat Sevashram Sangha, ISKCON, Ramakrishna Mission have set up their camps in the Gangasagar Mela 2022 like previous years for the benefit of mela pilgrims.

One comment on “Declare Bharat as Hindu Rashtra, there will be 15 others automatically within one year: Puri Shankaracharya.”