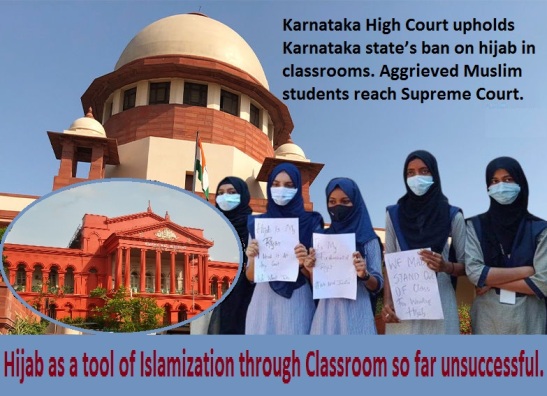 .
Upendra Bharti | HENB | New Delhi | March 15, 2022:: A Full Bench of the Karnataka High Court held Tuesday morning that the wearing of hijab is not a part of Essential Religious Practice in Islamic faith and thus, is not protected under Article 25 of the Constitution.
.
Headed by Chief Justice Ritu Raj Awasthi, the three-judge bench, referred to as a full bench of the High Court,  also included Justice Krishna S Dixit, who referred the matter to a larger bench, and Justice Khazi Jaibunnisa Mohiuddin. Justice Mohiuddin is a lady Muslim judge who took oath as an additional judge of the High Court in March last year.
.
The full bench further held that prescription of school uniform by the State is a reasonable restriction the students’ rights under Article 25 and thus, the Government Order issued by the Karnataka government dated February 5 is not violative of their rights.
.
Accordingly, the Court has dismissed the petitions filed by Muslim girl students, challenging the action of a government PU colleges in denying their entry for wearing a hijab (headscarf).
.
Chief Justice Ritu Raj Awasthi read out the operative portion of the judgment in the open court as follows:
.
“Our answers to the questions are, wearing of Hijab by Muslim women does not form Essential Religious Practice in Islamic faith.
.
Our second answer is prescription of school uniform is only a reasonable restriction, constitutionally permissible which students cannot object to.
.
In view of the above, the government has power to issue the GO of February 5 and no case is made out for its invalidation.
.
All writ petitions being devoid of merits are dismissed”.
.
The bench also maintained that the government has power to issue impugned order dated February 5, 2022 and no case is made out for its invalidation. The Karnataka government had banned wearing clothes which disturb equality, integrity and public order in schools and colleges, which the Muslim girls had challenged in the High Court. The bench also rejected the plea to initiate a disciplinary inquiry against the college, its principal and a teacher.
.
In its interim order the high court had restrained students from wearing saffron shawls, scarfs, hijab, religious flags or the like, within the classrooms.
.
Aggrieved by the Karnataka High Court’s order, a Special Leave Petition has been filed in the Supreme Court challenging the Karnataka High Court’s judgment which held that Hijab is not an essential religious practice of Islam and upheld the ban on wearing headscarf in schools and colleges.
.
As per report of the Live Law, the special leave petition has been field by a Muslim student named Niba Naaz through Advocate-on-Record Anas Tanwir.
.
With many others Karnataka Chief Minister Basavaraj Bommai on Tuesday welcomed the verdict and said everyone should abide by the verdict of the High Court on the Hijab row, and cooperate with the state government in implementing it. Calling for the maintenance of peace and order in the society, he also asked students to focus on their education, by accepting the court verdict.
.
Radical wings in Muslim community in India are trying to communalize the Hijab issue in the classroom over the uniform for their Islamic agenda. Some covert agents of them in Reuters, BBC, Al Jazeera  are trying the narrate the matter as a snatching of ‘human and religious rights’ from the Muslim minority in India. But these hypocrites never quote the precedents of ‘Hijab and Burqa Ban’ in a dozen of countries (in city or part of country) spreading three continents.
.
Hijab as a tool of Islamization through classroom has been found unsuccessful however in Karnataka, so far.
…
__Agency Inputs.