The beautiful soul of Kashmir is possessed by the evil of Islamic terrorism. 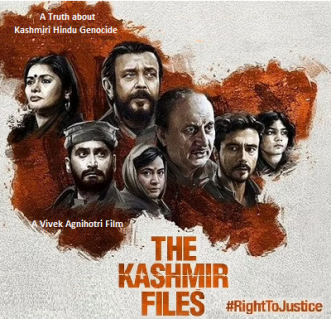 I had the opportunity to watch ‘The Kashmir Files’ at a special screening in New Delhi along with Vivek Ranjan Agnihotri and the team.

The horrific tale of the genocide of the Hindus in Kashmir by Islamic terrorists is something I have spent some time researching. I had also visited Kashmir for the first time post the abrogation of Article 370.

The Kashmir I saw, frightened me and continues to frighten me.

Kashmir has a beautiful soul. But this soul is under the captivity of an evil that is diabolic. Such is the diabolic nature of this evil that it strips a human of his or her basic humanness. That evil has a name. That name is Islamic terrorism and it is spread through Islamic radicalism. The aim of this evil is Islamic Kashmir and with persistence Islamic India.

Most Kashmiris, I spoke to from the Muslim majority invariably uttered this statement very proudly, “I am a Kashmiri but I am Pro-India’. I did not get such a statement from the Kashmiri Hindus, Sikhs, or Christians. They were Indians.

This statement from the Muslim majority in Kashmir was an indication of their mindset. They believe in their dominion over the land, jobs, and culture. At first, I thought that there is nothing wrong with that thought. Most Indians have it towards their state and land. I am a Goan and I am very passionate about the rights of the Goans in Goa while I share the same passion about the rights of being an Indian.

The problem with that ‘I am a Kashmiri but I am Pro-India’ is that you think of Kashmir as separate from India. Your thought is directed to being ‘Pro-India’, not Indian. That is dangerous because Kashmir is a part of India and will always be a part of India.

The movie ‘The Kashmir Files’ is not a movie but a depiction of the truth that has been spoken about in the close corridors of the political and social circles of India but never brought to mainstream Indian cinema.

The truth is that in India we witnessed the brutal genocide of our Kashmiri Hindus on January 19th, 1990 but we were as a nation silent when they were raped, brutalized, and killed; we continued to remain silent for three decades over the plight of our Kashmiri Hindu sisters and brothers.

I cannot as an Indian and more so as a human come to grip with this brutal truth that the Kashmiri Hindu genocide happened in India and we as Indians remained mute spectators to their horror.

The Indian government at that point of time acted as the three monkeys of Mahatma Gandhi that ‘Saw No Evil, Heard No Evil, Spoke No Evil’

The reasons many youths are still being captivated by the life of militant, stone-pelter, and overground workers is the radicalized thoughts in their mind that they working in the interest of Allah and in the interest of the people of Kashmir.

One militant I spoke to when I had visited Kashmir two years ago, claimed that the J&K police, framed him on false charges for carrying AK-47 weapons and let him rot in jail for four years. He managed to get bail. In our conversation, he was expressing his anger to me by yelling at me about how he hates India, wants Kashmir to align with Pakistan because it’s an Islamic nation and that the Indian government destroyed Kashmir. He dreams of a Kashmir free of India supported by Pakistan. I told him that his dream would remain a dream.

The Islamic thought managers from the radical groups funded through Pakistan by Saudi Arabia, Turkey, and Iran know that the youth in Kashmir, needs to be coveted by making him feel inferior and then stroke his superiority complex and vanity to lead him to radicalization.

Poster boys of the militancy in Kashmir Burhan Wani and Zakir Musa were a product of this shallow mindset that morphs itself into a person who craves appreciation, attention of the opposite sex, and easy money.

Burhan Wani or Zakir Musa were not heroes. In my opinion, they were cowards. People who target the innocent by their acts of terror to spread fear and despondency are cowards.

When someone in Kashmir or outside Kashmir idolizes and glorifies acts of cowards like Zakir Musa and Burhan Wani they are legitimizing terrorism and are worse than the terrorists they praise.

The Kashmir Files exposes the evil that roams the streets of Kashmir. The evil of Islamic radicalism. It is foolish to think that Islamic terrorists only target only Hindus, Sikhs, or Christians. Through their acts of terrorism, they have destroyed the lives of the Indian Muslims and the youth in Kashmir.

Islamic terrorism through their radicalism has made regressed a beautiful and knowledgable destination like Kashmir to a vegetative state, to a state of permanent coma devoid of any socio-economic progress.

Kashmir has a soul but evil has possessed its soul. The Indian government and Indians all over India must work to exorcise the evil of Islamic terrorism in Kashmir because it has started to spread its snare in other parts of India.

This article was published first in Goa Chronicle on March 14, 2022.

Writer Savio Rodrigues is the Founder & Editor-in-Chief GoaChronicle.com; author of the book, “Modi Stole My Musk”; a keen researcher on Indian Culture and Heritage and a Visionary of Women Empowerment.

This entry was posted on March 18, 2022 by hinduexistence in Communal Situation Created by Muslims, Conspiracy against India, Islamic Aggression in Kashmir, Islamic Terrorism, Jihad in Jammu and Kashmir, Save J&K in India, SAVE KASHMIR AND POK HINDUS, SAVE KASHMIR HINDUS AND PANDITS and tagged Evil of Islamic Terrorism, Savio Rodrigues, The beautiful soul of Kashmir, The Kashmir Files.