‘Why Muslims are so frightened to allow the inspection of Gyanvapi?’

Will examine Gyanvapi case for listing: Chief Justice of India.

Hindus are  ready to contest in any Hindu matter in any court of law: Adv. Vishnu Jain.

Upendra Bharti | HENB | New Delhi | May 13, 2022:: The Chief Justice of India N.V. Ramana on Friday said he would examine and consider listing a plea to stop the inspection, survey and videography of premises inside the Gyanvyapi mosque in Varanasi by an advocate commissioner on the orders of a local court.

Senior advocate Huzefa Ahmadi, appearing for Anjuman Intezamia Masjid Committee, the caretakers of the mosque, requested the apex court, in an oral mentioning, for urgent listing of their case seeking an order of status quo.

Mr. Ahmadi said the survey was ordered despite the mosque being protected under the Places of Worship Act.

“Let me look at the papers of the case… How can I pass orders now? I will read and then pass orders. We will see and list it,” the CJI addressed him.

The dispute stems from a case filed by five Hindu women in the local court. They had demanded daily access and the right to offer prayers at a Hindu site located outside the western wall of the mosque.

The court had also rejected the mosque committee’s plea to replace advocate commissioner Ajay Kumar Mishra. The committee had accused him of being “biased” in favour of the Hindu plaintiffs but the court had found no merit in their argument.

The court had also given the local administration power to remove any hindrance in the way of the inspection and videography. 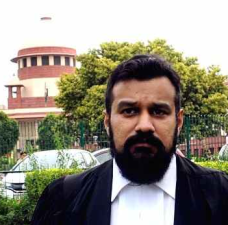 Interacting with HENB, Vishnu Shankar Jain, one of the advocates for the Gyanvapi case contesting in a Varanasi Court told emphatically, “Hindus are always ready to contest in any Hindu matter in any court of law”.

“Why Muslim parties are putting hurdles to disrupt the inspection inside the Gayanvapi mosque, violating the court order?  Why Muslims are so frightened to allow the inspection of Gyanvapi? They know well that the inspection will reveal the truth about Islamic period of Indian history in which period thousands Hindu temples were converted forcefully as Mosques under brutality of Islam,” added Advocate Jain.

This entry was posted on May 14, 2022 by hinduexistence in Hindu Awareness, Hindu Legal Contest and tagged Gyanvapi Inspection, Gyanvyapi mosque Case, Now Gyanvapi case in the Supreme Court., Will examine Gyanvapi case for listing: CJI.